A home on the LSU and City Park lakes. Photos by Collin Richie

With thousands of new jobs in Baton Rouge, real estate is hot in the Capital Region, says realtor Jerry del Rio of Jerry del Rio Real Estate. Transfer residents are moving in and many locals, especially new homeowners and growing families, are waiting patiently for the perfect property to emerge in the neighborhood of their choice. Del Rio says that every client is different, but Baton Rouge is diverse enough to satisfy a range of tastes and preferences.

“There’s definitely something for everybody,” she says. “Every neighborhood has its own thing.”

Here are some of Baton Rouge’s most notable neighborhoods and what makes them winning places to nest. 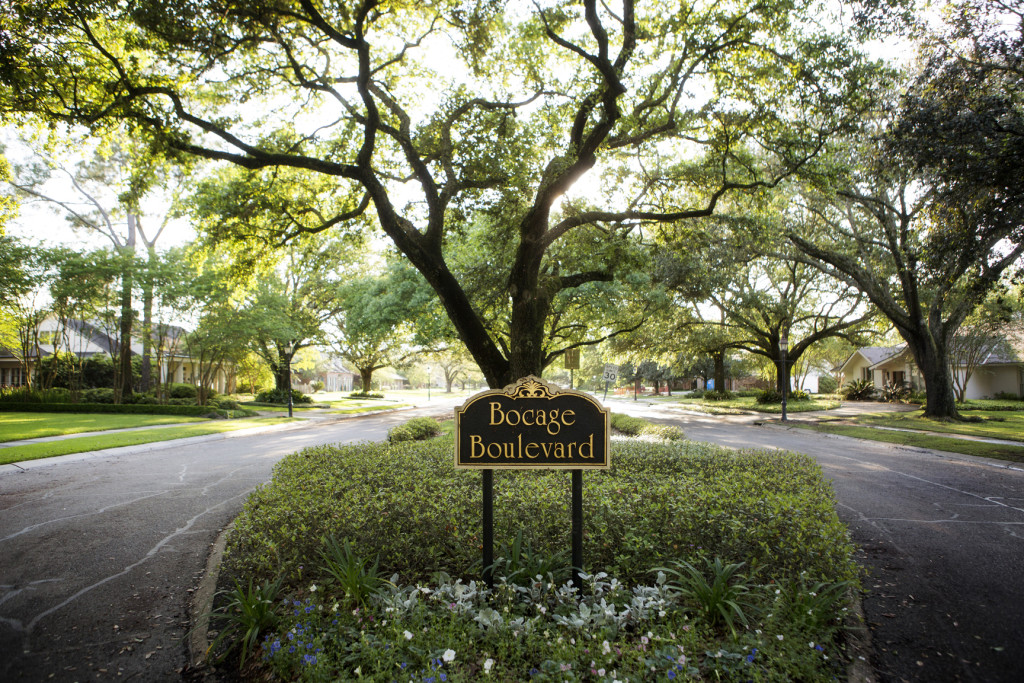 With luxury homes, secluded streets and large lots, Bocage has long been considered one of Baton Rouge’s most appealing addresses. Sandwiched between Jefferson Highway and Corporate Boulevard, the area is situated in a sea of retail, but still feels quiet and private. There are numerous conveniences within a stone’s throw of Bocage, from supermarkets to high-end clothing stores to salons.

• Some houses were designed by A. Hays Town and by other sought-after architects.

• Neighboring streets Jefferson Highway, Old Hammond Highway and Corporate Boulevard offer some of the most dense retail in the parish. Everything from school uniforms to designer shoes to take-out healthy meals can be found nearby.

• Restaurants range from national chains such as P.F. Chang’s and Bonefish Grill to the local City Pork Brasserie and Bar.

• Tennis enthusiasts in the neighborhood can join Bocage Racquet Club, a family-friendly swimming and tennis club.

• Interstates 10 and 12 are located within a five-minute drive. 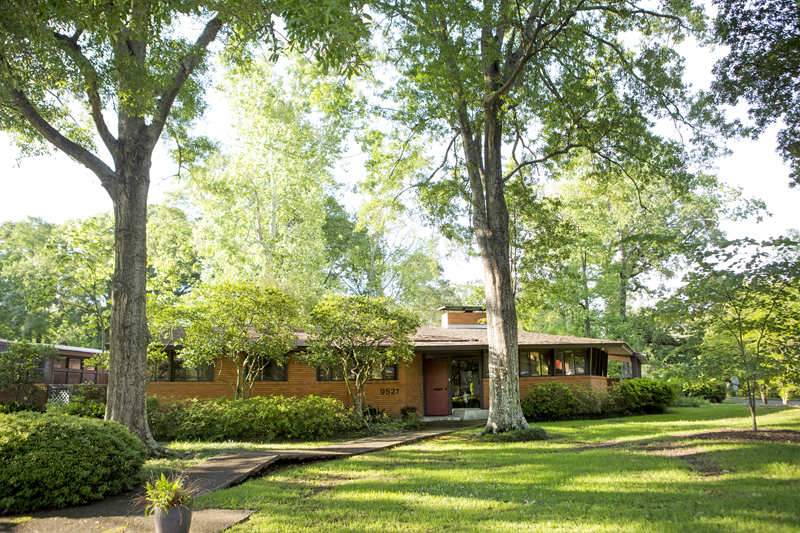 • While quiet and secluded, the neighborhood is bordered by bustling retail districts and major thoroughfares.

• There is a dedicated pedestrian/bike loop that is approximately 1.54 miles long and provides a safer experience for cyclists and walkers. 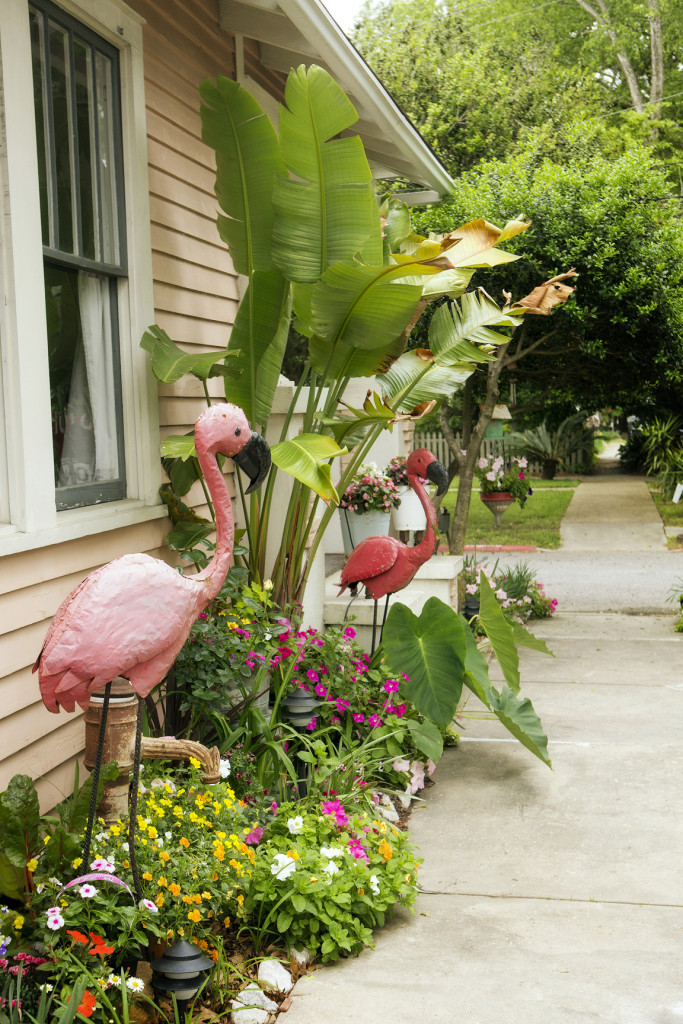 Downtown’s historic neighborhoods, Spanish Town and Beauregard Town, are the oldest in the Capital Region and feature stunning historic houses and streetscapes. Spanish Town is within walking distance of the State Capitol Complex. Beauregard Town is situated on the north and south sides of Government Street and includes European-style diagonal streets. Downtown is also home to new housing, including loft apartments. By the middle of 2016, about 400 new housing units will be open to buyers and renters.

• Downtown is home to the majority of Baton Rouge’s parades, 5Ks and marathons, concerts and holiday events. Living in downtown means you can walk to  enjoy these gatherings.

• There are dozens of restaurants, cafés and bars in downtown, including a growing number of fine dining and eclectic eateries. The Red Stick Farmers Market is held downtown every Saturday.

• More than 55,000 men and women work in downtown Baton Rouge every day.

• The area is home to Baton Rouge’s oldest churches.

• The riverfront includes the Louisiana Art & Science Museum, the River Center, the Old State Capitol, the Shaw Center for the Arts, two casinos and the USS Kidd.

• Property values in downtown are high and will continue to increase. A small number of luxury townhomes with high-end features are being built on the riverfront near the new IBM building. 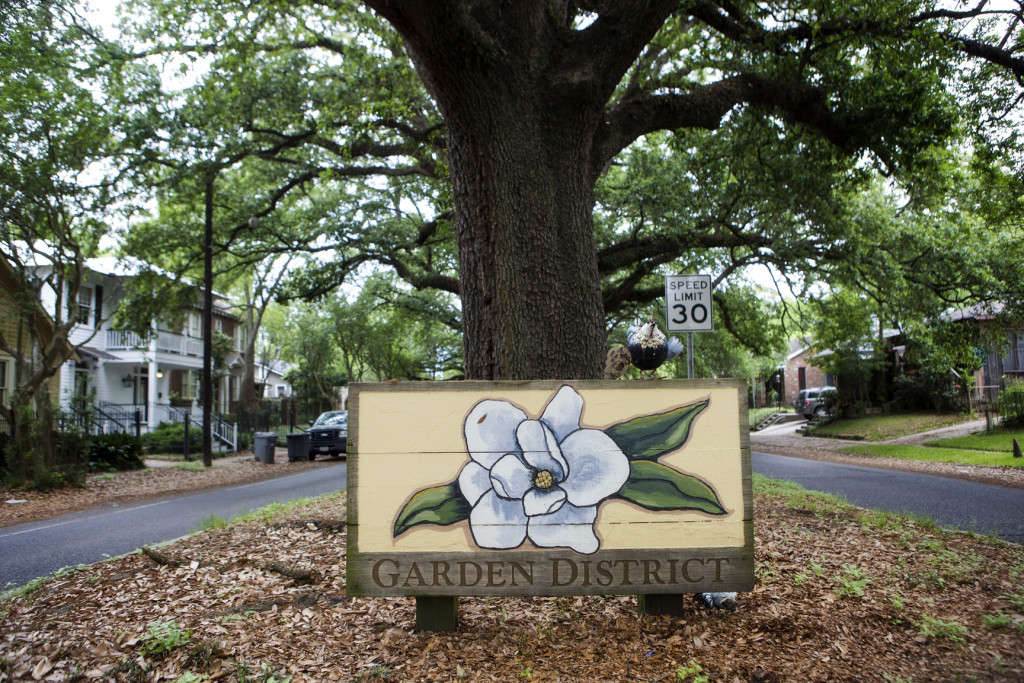 Named a Top 10 “Great Neighborhood” by the American Planning Association, Baton Rouge’s Garden District is known for its historic architecture, front porch culture and active civic association. The neighborhood was established between 1910 and 1930 and includes three designated historic districts: Kleinert Terrace, Roseland Terrace and Drehr Place. Some individual homes are also listed on the National Registry of Historic Places.

• Many of the Garden District’s earliest residences were built in the style of Queen Anne Colonial Revival, with small fluted columns, curved galleries and elaborate rooflines.

• There is a wide range of housing, from bungalows and cottages to million-dollar mansions with unique architectural features.

• At least two “little free libraries” exist in the neighborhood, which allow neighbors to exchange books.

• Within biking distance are the eclectic shops and restaurants in the Perkins Road Overpass District. The less-than-one-mile corridor includes a couple dozen eateries and bars.

• The Wearin’ of the Green parade, which turned 30 in 2015, rolls through the Garden District along Terrace Avenue and Perkins Road on St. Patrick’s Day weekend. 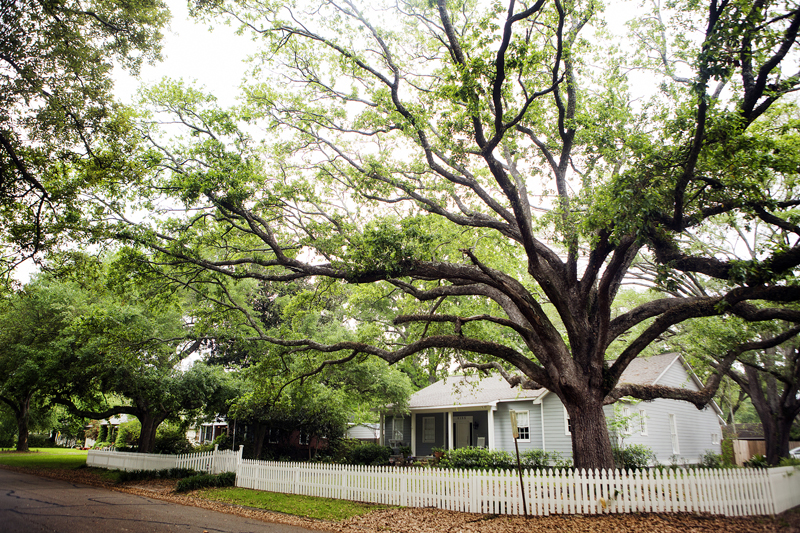 These three neighborhoods, which roughly follow Broussard Street and Hundred Oaks Avenue, share similar traits, including lots of native trees, mature foliage, large lots and luxury homes with high ceilings, hardwood floors and custom finishes. Homes were built beginning in the ’40s. The area has also seen new construction on existing lots. A large number of families live in this area and enjoy strolling, biking and jogging along the oak-lined streets.

• Architecture is varied and includes older homes that have been renovated as well as new construction.

• Webb Park, a BREC facility, has seen a major upgrade thanks in part to the work of the Webb Park Neighborhood Association. The park features new playground equipment and a shaded picnic area.

• There are numerous retailers, restaurants, supermarkets and pharmacies in the area. 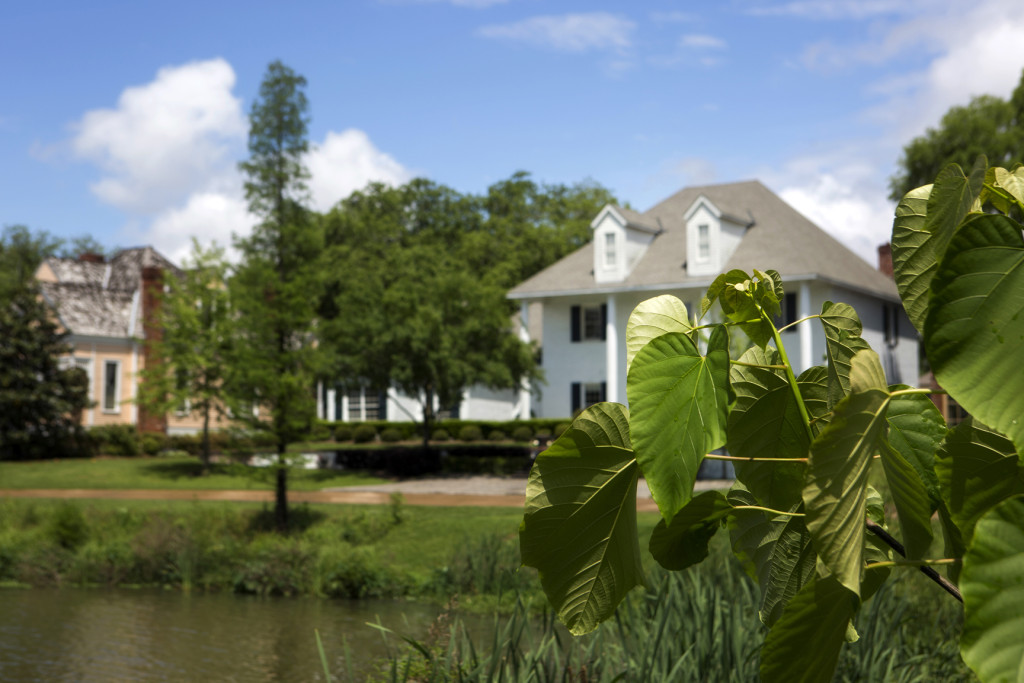 This majestic part of Baton Rouge is anchored by two of the Capital City’s most popular sites: the Louisiana State University campus and the LSU/City Park lakes. There are moss-trimmed live oaks throughout the area, creating a tranquil and shady backdrop for strolling, biking or jogging. The neighborhood has quick access to the interstate, Acadian Village and Perkins Road.

• Residents live within walking distance of the LSU campus, with access to sporting events, art exhibits and live theater.

• The Baton Rouge Area Foundation is undertaking a master plan for the LSU/City Park lakes to increase pedestrian and bike paths and add more recreational activities.

• Homes range from moderate to luxury. Lakefront lots are among the most popular residences in the Capital Region.

• College Town has high appraisal rates, and some of the highest per-square-foot value in the city.

• Residents can reach I-10 via Acadian Thruway in minutes.

• There are plenty of restaurants nearby near the north and south gates of LSU, Nicholson Drive and the Perkins Road Overpass District. 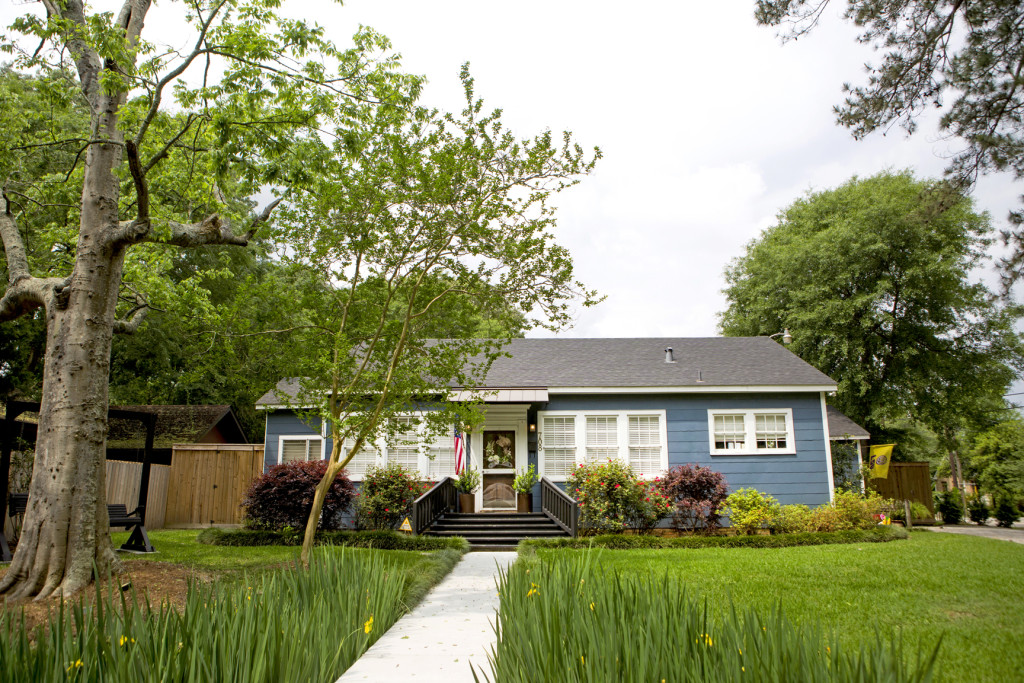 Mid City neighborhoods Ogden Park, Bernard Terrace and Capital Heights have long attracted residents who appreciate local merchants, charming housing and an eclectic vibe. Two major projects promise to make this area an even more enviable destination. The FutureBR Parish Master Plan calls for sections of Government Street to be converted from four lanes to three to accommodate a center turning lane, pedestrian paths and bike lanes. Second, the former Entergy site east of the interstate is being planned as a mixed-used development with a possible rail station in the future.

• Architecture is dominated by cozy frame houses, many of which have been renovated and updated.

• About six years ago, Capital Heights Avenue was converted to a one-way street to make room for a bike lane. It draws cyclists, dog walkers, kids on bikes and parents with strollers. 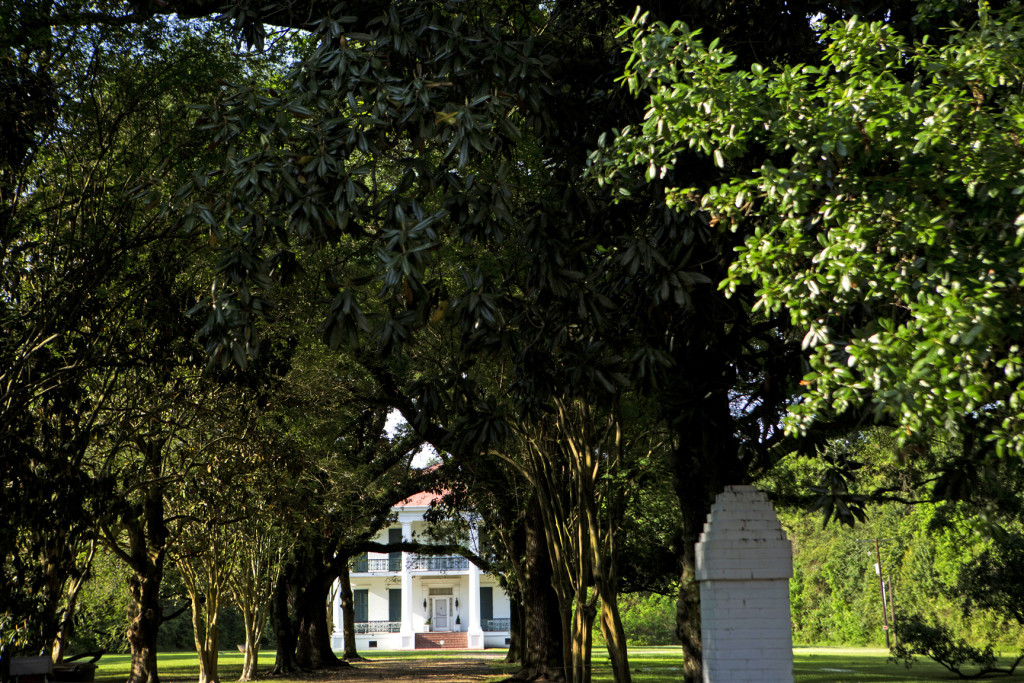 Large lots, stately homes, mature oak trees and a range of architectural styles define Old Goodwood, an area between Jefferson and Airline highways. In the last few years, the neighborhood association has worked to make the area more walkable by connecting a pedestrian path to the BREC park situated in the neighborhood.

• The main branch of the East Baton Rouge Parish Library is located in Old Goodwood. The state-of-the-art building was unveiled in 2013.

• Old Goodwood residents have quick access to BREC’s Independence Park facilities, which include tennis, soccer fields, an arboretum and a community theater.

• To dine out, residents can head to Towne Center or Government Street for a variety of local eateries as well as national chains.

• Most residences are sizeable and include modern and high-end features, diverse architecture and high resale value. 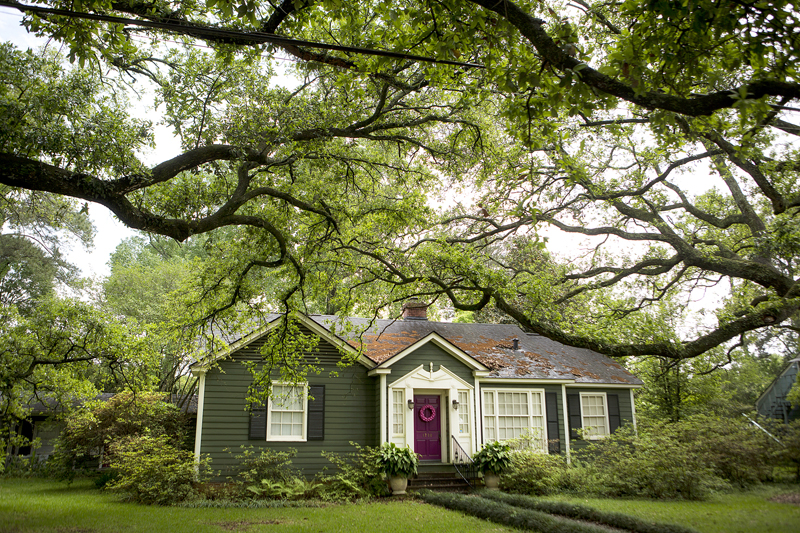 Home to the Southdowns Mardi Gras Parade and located between Perkins Road and Stanford Avenue, Southdowns is a favorite neighborhood for residents with ties to LSU, including the main campus or the Pennington Biomedical Research Center. It’s easy to reach the interstate and many destinations from Southdowns, including supermarkets, pharmacies, retailers, restaurants and doctors’ offices. One of the largest Catholic churches in the city, St. Aloysius, is located in the neighborhood on Stuart Avenue.

• In the older part of the neighborhood, houses include many cottages and bungalows. The periphery of Southdowns includes newer, larger homes on expansive lots.

• Rouzan, a traditional neighborhood development underway, borders the neighborhood to the south on Perkins Road. It features higher-end housing and will soon feature eclectic retail, including the state’s first Alamo Drafthouse Cinema. A 200-unit apartment complex is also scheduled for Rouzan.

• Residents of Southdowns can reach Acadian Village in minutes, which includes Trader Joe’s, restaurants, retailers and a bank.

• The LSU/City Park lakes are located within minutes and are a favorite spot for walking, biking and observing migratory birds.

• Southdowns is equidistant from City-Brooks Park on Dalrymple Drive and the Perkins Road “Extreme Sports” Park.

Taste this: Bites and sips we loved this month