Photographers make it look easy, but there’s an art to taking great pictures of children.

“With toddlers and younger kids, you really have a narrow window,” says Sasha Matthews, principle photographer and owner of Green Tangerine Photography, which she opened in Baton Rouge in 2014. “Their attention span is not going to last much longer than about 20 minutes, so you have to get creative.”

Pros like Matthews draw from a basket of tricks—sometimes literally—to help children relax, stay cheerful and enjoy themselves. Matthews specializes in documenting families, often starting with pregnant women and returning to capture their children as they grow and change with each birthday.

She uses stuffed animals, silly jokes, a tickle (if a child is comfortable) and other tested strategies to create organic, authentic moments that don’t feel forced. The trick, Matthews says, is not to pose her subjects, but to place them in situations where they laugh, look at each another fondly and engage in activities that trigger irreplaceable smiles. 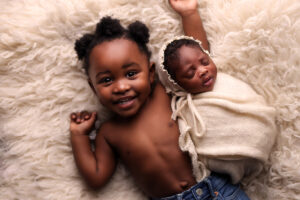 While it’s tempting to have toddlers hold new babies, a better idea is to have them lie on a cozy surface, Matthews says. “It can be hard to get (toddlers) to cooperate, and you have the consideration of the baby’s safety,” Matthews says. In this shot, joining his baby sister on the blanket helped the older brother relax. 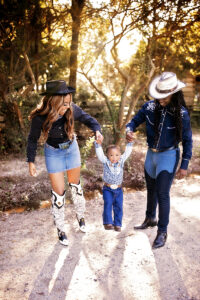 Turn posing into playtime. When this child was tired of taking pictures, his moms began gently swinging him. “Families don’t always have to be posed and formal,” Matthews says. 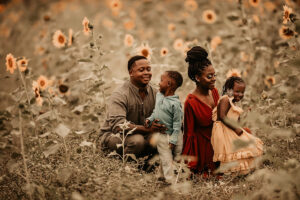 One of Matthews’ favorite ploys with distracted kids is to give them a job. “I tell them to go pick a flower for Mommy, or bring me a nice rock,” says Matthews, who often shoots outdoors. For this shot, Burden Museum & Gardens was the backdrop. “It makes them feel important, and you get a really sweet reaction from both child and Mom.” 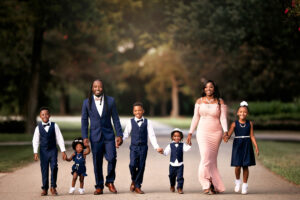 A family with a larger number of kids like this one might find that the best move is to actually move. Walking slowly toward the camera takes away stiffness. “Kids think it’s a race,” Matthews says. “And it’s hard to frown when you’re moving.” 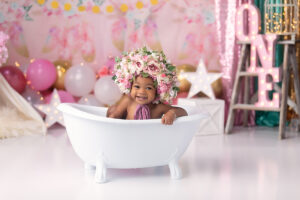 When it’s clear a toddler has had enough, Matthews pulls out a secret weapon. “Sometimes when babies aren’t having a great session, doing something familiar usually calms them,” Matthews says. “In this case, a bath did just the trick.” Matthews keeps props like this portable vintage-style bathtub in her studio. For this photo, she filled it with warm water and rubber duckies. “It’s a good technique when you’ve tried everything,” she says. 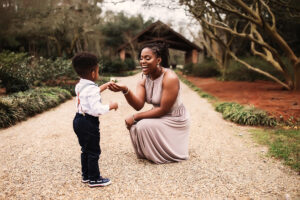 The command to look at the photographer and say “cheese” has been ingrained since cameras were invented, but sometimes it’s looking away from the camera that yields better results. “Here, no one is looking at me,” Matthews says. “They’re engaging with each other, and you can see the closeness.” Moreover, the parents are on ground level with their kids. “That also helps children feel comfortable,” Matthews adds.