Imagine spending four years of your life balancing high atop a scaffolding, brush in hand, painting 5,000 square feet of frescoes that would become masterpieces of Western art. Originally, the Sistine Chapel’s vaulted ceiling was painted blue and covered with golden stars until Michelangelo, a sculptor, was commissioned by the Pope and allowed to present his own interpretation of the history of creation. Centered on several scenes from the Old Testament, the ceiling begins with the Creation of the World and ends at the story of Noah and the Flood.

In order to make the figures more easily visible from the floor, Michelangelo used vibrant colors to bring over 300 characters to life and separated them into a series of panels. In a fascinating new exhibition, you can get remarkably close to this magnificent work without taking a trip to Rome. The Raising Cane’s River Center is bringing the ceiling to Baton Rouge. 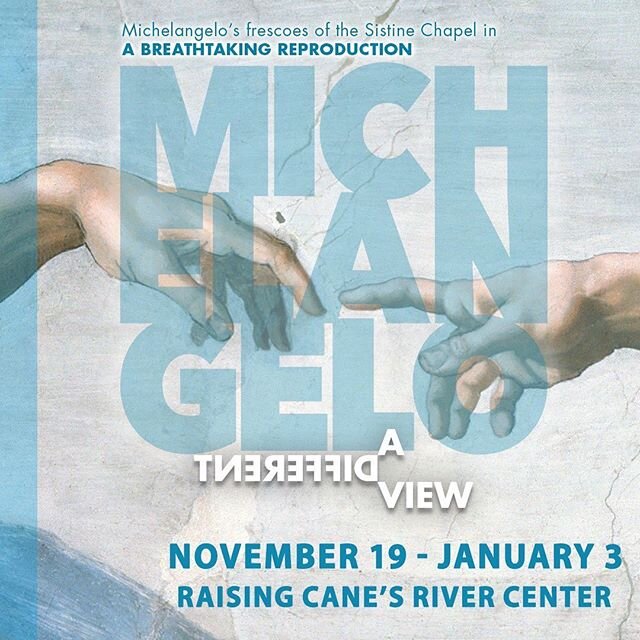 Working in partnership with the Vatican Museums, the famous frescoes have been photographed and transferred onto special fabric webs at a high resolution and are displayed at floor level. This technique delivers a true-to-life reproduction of the ceiling and an impossibly close-up view of Michelangelo’s attentive brushwork.

The Last Judgment was painted 25 years after the ceiling (1536-1541) when Michelangelo was almost 67 years old. Cardinal Carafa objected to the naked figures and launched the notorious “fig-leaf campaign” to cover up the obscene aspects of the painting.

Originally opening in April, the exhibit, Michelangelo—A Different View, has been rescheduled for November 19 – January 3, conveniently in tandem with Skating on the River. Buy your tickets and make it a day with a close-up look at the Sistine Chapel’s ceiling followed by some fun on the ice. The Raising Cane’s River Center remains mindful of the general health of our community and its preparations are focused especially on individuals in high-risk groups.

Save the date without worry.
Go ahead and get your tickets—if your event is postponed or rescheduled, rest assured that your ticket will be honored on the new date of the event.