Disc golf is more than a game of throwing Frisbees into a basket. In Baton Rouge, it’s a community uniting young and old, amateur and professional, from all walks of life.

“With the low entry level and the high skill ceiling, even a little 8-year-old or a 5-year-old could pick up a disc and throw it—but then you can spend years to actually get really good,” says Lance Gremillion, vice president of the Baton Rouge Disc Golf Association.

Far from the “NASCAR of golf,” Gremillion jokes, disc golf is essentially golf with different objects. Players move through courses, keeping score and trying to reach the hole in the fewest number of “strokes.” But here, the end point is a metal basket with chains inside to slow down the discs. 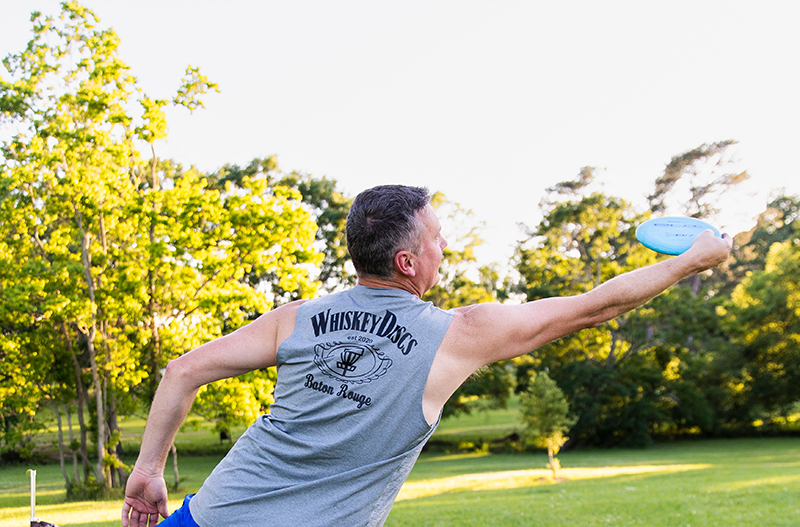 Much like golf’s variety of clubs with different purposes, disc golf has a range of plastic discs designed for different speeds, distances and shots. Players toss round-rimmed putters for closer, more accurate shots, as well as midrange and driver discs, analogous to their cousins in their sister sport.

Gremillion discovered disc golf just out of college. It was the cheapest way he found to be active (starter kits cost about $40) and get outside.

The pandemic was a boon to the growth of Baton Rouge’s disc golf community, as many sought out new ways to stave off boredom or stay fit. Following lockdown and an injury that prevented her from playing in her women’s soccer league, Kate LeBeau, a digital network manager at Lamar Advertising, became hooked. 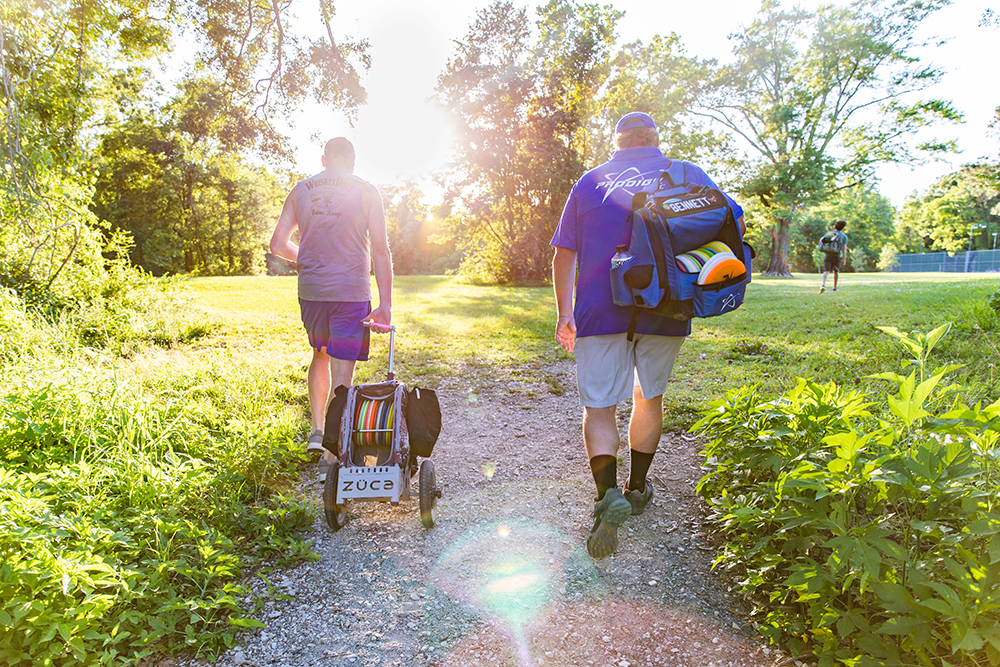 “It’s like hiking, except there’s discs involved,” she says. “When I’m out there, I don’t really think about any of my personal problems or anything like that. I just play.”

LeBeau regularly attends events at Highland Road Park, including weekly low-stakes tournaments that have been held on Wednesday evenings since the 1990s, when the sport first peaked in Baton Rouge.

At the time, Highland Road Park was known nationally in the disc golf world for its picturesque course with trees and a series of bridges. Now, with new groups and a dedicated disc golf shop Counterspin Discs, which opened in March 2021, the community hopes to put Baton Rouge back on the map. 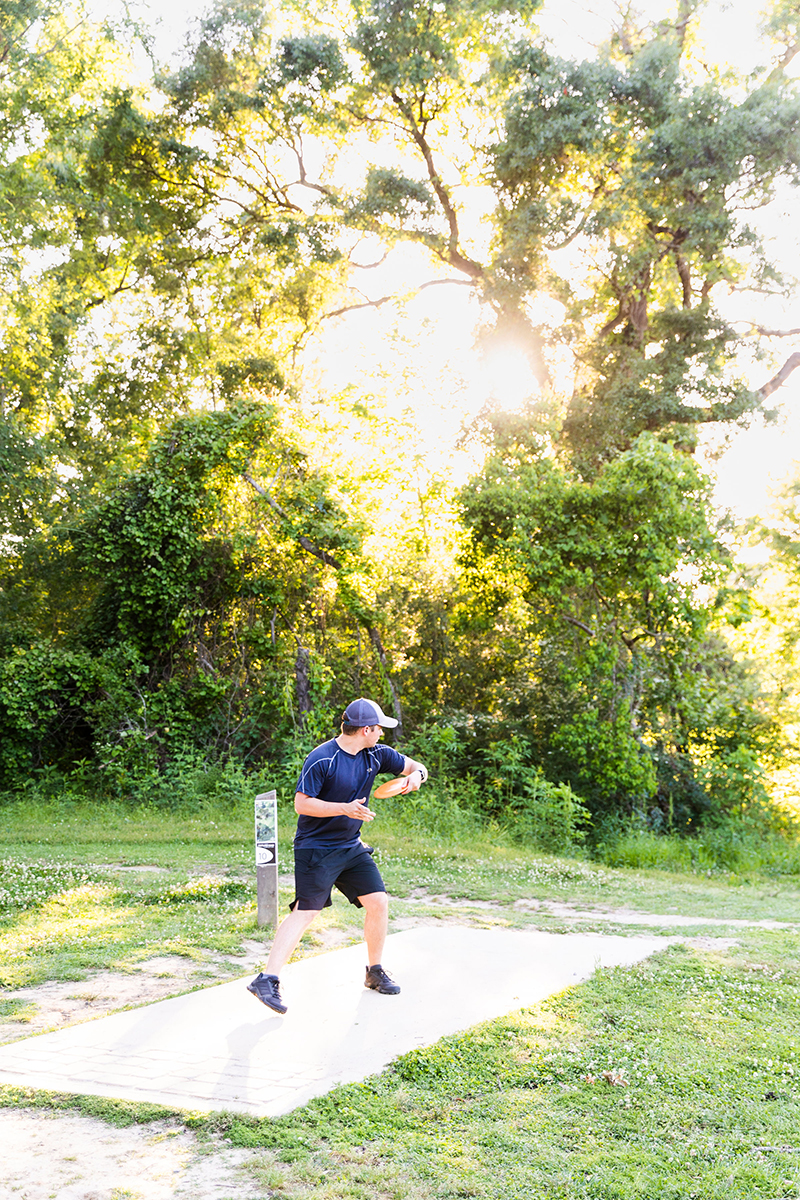 Playing disc golf in and around the area for nearly 50 years, retiree Walter Price returned to the sport himself during the pandemic. Along with Steven Marhefka and a few others, Price started a social league called Whiskey Discs in 2020. 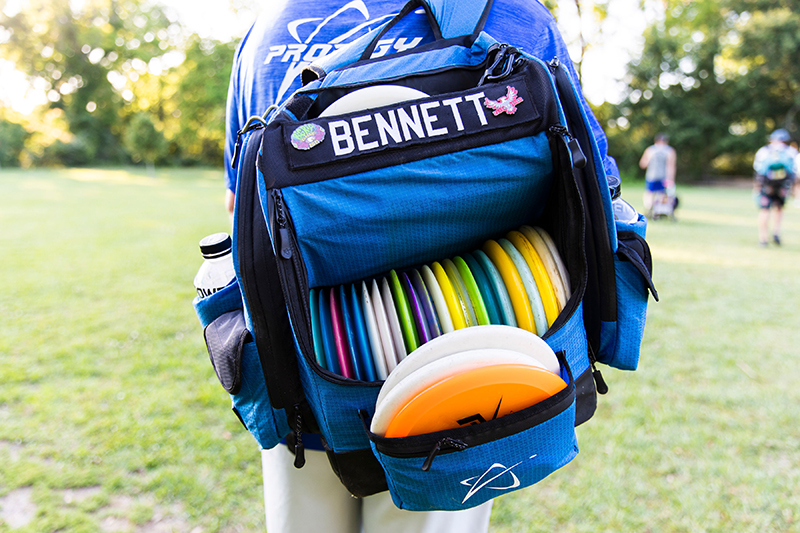 “A couple of guys got together and started playing regularly, really having a good time. Eventually, more people joined us, and Whiskey Discs just evolved,” Price says.

Whiskey Discs is one of about three large disc golf groups in Baton Rouge, with others including Kingfish and Counterspin. And more than 1,100 players have joined the Baton Rouge Disc Golf Association’s Facebook group, which has consolidated the community into a singular entity recognized by BREC.

“We don’t do this for profit,” Marhefka says. “We do this as a way to better everyone and keep the sport going.”