Michael Anderson is an odd mix of aspirational. He’s had a career that would spark inconsolable envy in two categories: aspiring artists and fashion designers for his success in painting and apparel making, and sports fans for his myriad collaborations with premier athletes. 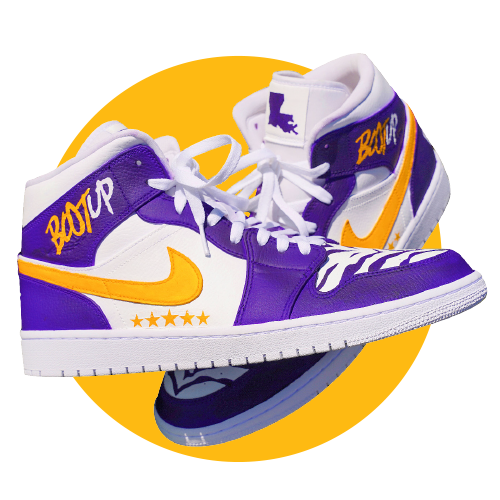 The 30-year-old LSU alumnus and former oil and gas engineer is the founder and (for now) one-man factory behind a brand that, if you follow any branch of LSU Athletics (and particularly its players’ social media), you may have heard of: Boot Up Customs.

“‘Boot Up’ is a slogan for Louisiana, because it’s the shape of a boot, and it’s also lacing up, preparing and getting ready to go into battle,” Anderson says. “It’s about attacking every day … following your passions and following your dreams.”

Under that brand, Anderson has painted portraits, sneakers and cleats for an impressive—and growing—list of both collegiate and professional athletes, including the likes of Leonard Fournette, Dylan Crews and Diontae Spencer—and even a few formidable names in the rap game.

His shoes are hand-painted and airbrushed in vibrant shades, and each detail, from delicately painted Tiger stripes to jersey numbers to abstract shapes, tells the story of the person who will wear it.

Ironically, it all started because he wanted a painting he couldn’t afford.

Jacob Zumo is another popular artist, who grew to Baton Rouge fame from a similar hustle to Anderson’s: painting portraits of celebrities. Around the time Anderson graduated from Catholic High School in 2010, he saw one of Zumo’s portraits of the late rapper Mac Miller and fell in love with it. But with an $1,800 price tag, it was well outside his budget.

“So I said, ‘Alright, then I’m gonna start doing it myself,’” Anderson says over the phone from Austin, Texas, where he now makes monthly trips from his current creative headquarters in Denver, Colorado, to work as a sales manager for a solar power company.

Zumo and Anderson would go on to become friends and collaborators, but in the meantime, Anderson worked toward his first big project.

In 2016, he painted a portrait of former LSU running back Leonard Fournette with his young daughter—Anderson’s first attempt at following Zumo’s example. With the help of some connections on the team, he shared the painting with Fournette via Snapchat–who ended up loving it, inviting Anderson to deliver it to his apartment in person.

After that, things were pretty slow for a minute, as Anderson slogged through his rigorous engineering curriculum and entered the professional workforce.

But then in 2018, two watershed projects came through that cranked the burner on his career: a portrait for rapper Russ (“one of my biggest inspirations—I consider (him) one of my heroes,” Anderson says,) and custom sneakers for former LSU basketball player Skylar Mays. The sneakers were made in honor of Mays’ late teammate Wayde Sims, whose tragic death rocked the LSU community that year.

“I don’t know if anything can ever top that,” Anderson says of the Mays-Sims project. “That was really personal.”

It was then that “the gears started turning,” and Anderson began to believe he could make an honest, profitable go of an art endeavor that, a few years prior, would have seemed like an ungraspable pipe dream. 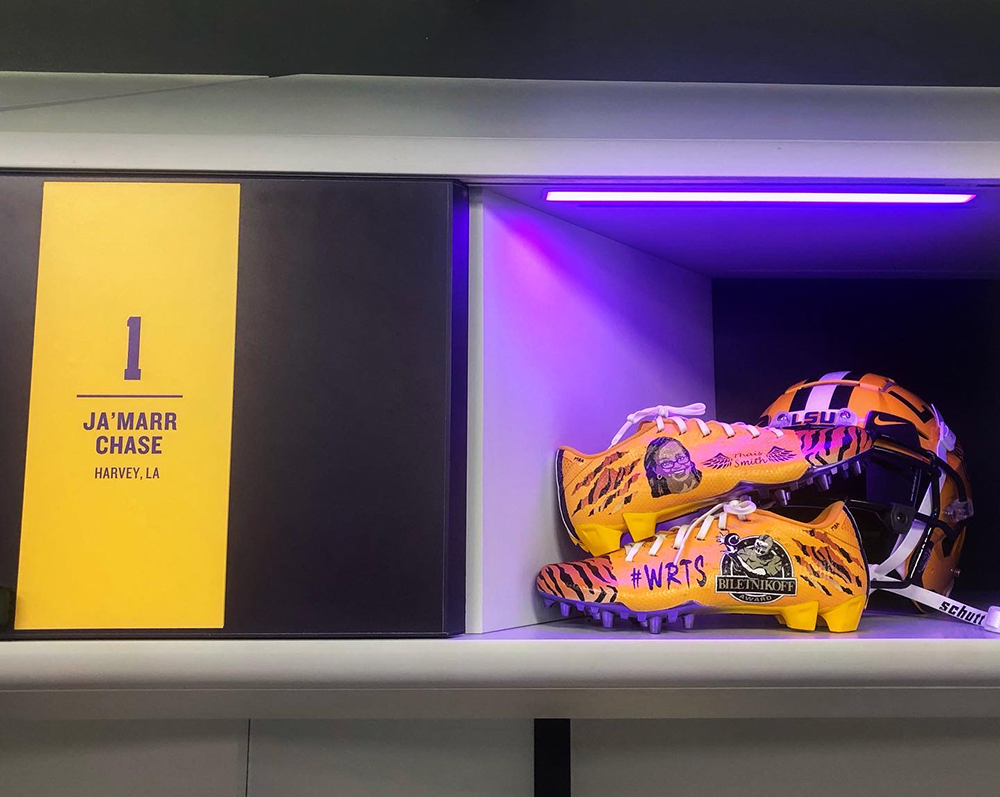 But with all that success and acclaim around the nation—and yet heftier projects on the horizon, like his first mass-produced sneaker and hoodie designs, soon to be made available to the public on his website—Anderson says it’s still the projects about, for or dedicated to Louisiana—and LSU in particular—that matter most to him.

“I have so much pride in where I’m from, in the Louisiana community, the LSU community, so being able to represent Louisiana and LSU as I do this is amazing,” he says. “I want to paint the entire state of Louisiana in Tiger stripes.” bootupcustoms.com