The line’s sequined tiger tees and bedazzled jersey-style sweaters are designed to stand out in the stadium, with their sporty-meets-high-fashion-style.

“I’ve played year-round sports my entire life,” Cory says. “I’ve always been kind of a tomboy who was into fashion, and I’ve mixed those two sides of me … whether it was dressing up to go hunting and fishing with my dad or getting really decked out for a game day.” 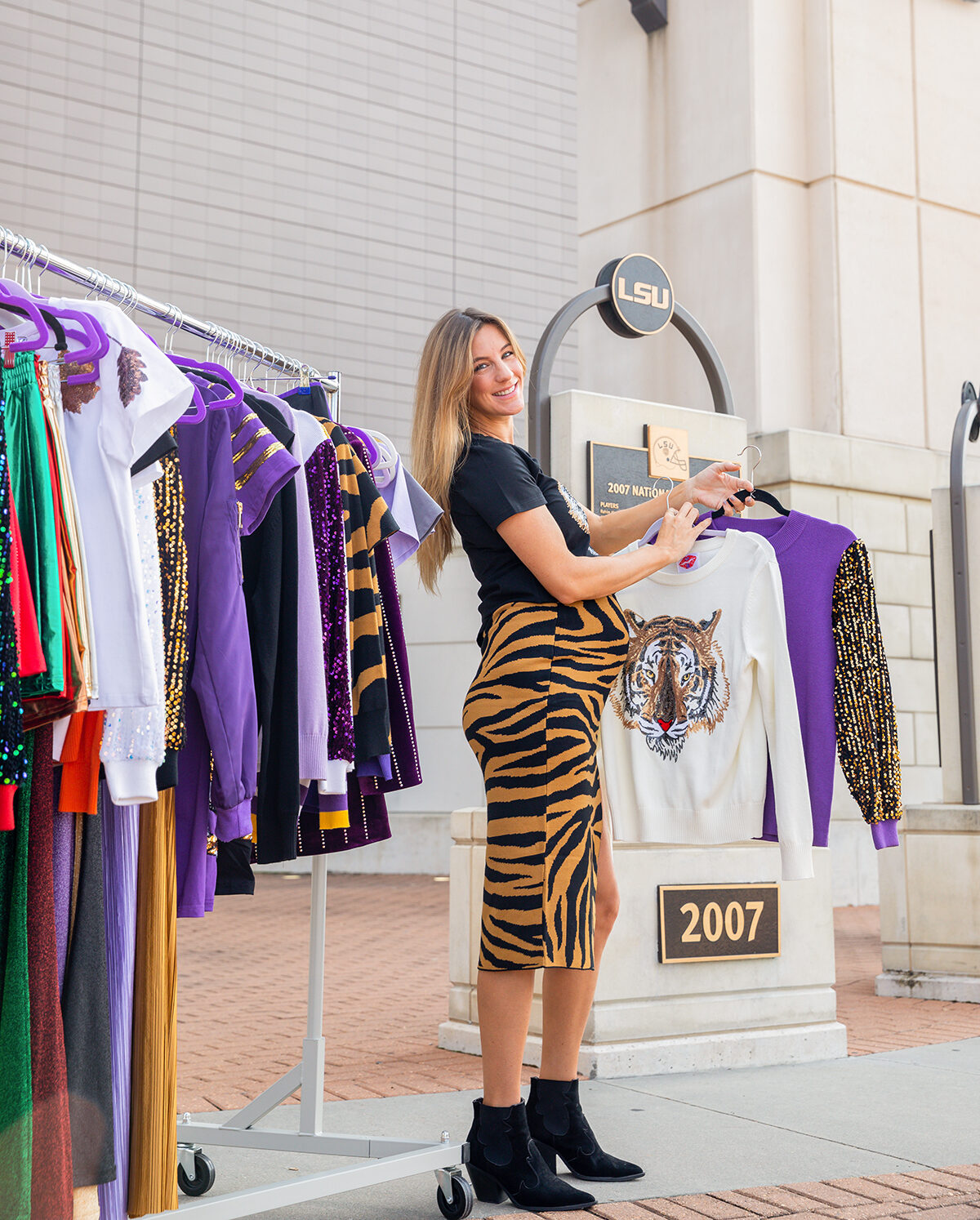 It’s what ultimately led to Sparkle City: a brand known today for bringing glitter and style to football. Cory, who is now the brand’s sole owner, says the idea for the brand began with a partner when she was still a student at LSU. When buying clothes for fall football, she found boutiques mostly stocked with generic purple and gold tops.

“Game-day fashion was cute when I was in college,” Cory recalls. “But I could never find pieces that were specifically for the game or that showcased the spirit of the team I was cheering for.”

It was through this experience that she found her new brand’s niche: designing game-day fashion that was “fun, funky and sparkly.”

In 2018, Sparkle City was launched with two sweater designs. The brand has grown ever since, now with collections for a multitude of sports teams as well as festive pieces to make a statement for any holiday or Mardi Gras party. The brand has even expanded to making pieces for bridal parties and has done custom work for Louisiana celebrities such as Big Freedia.

Cory credits a lot of that growth to LSU’s iconic football season in 2019. She remembers getting an email from an LSU staffer asking her to showcase Sparkle City pieces to some women at the football operations office. When the meeting went well, Cory began cranking out custom pieces for the LSU staff, coaches and family members she’d made connections with.

Once these famous ladies were seen wearing Sparkle City on the sidelines, the brand could soon be spotted in the crowds inside and around Tiger Stadium, too. And after Sparkle City gifted ESPN football analyst Lee Corso a custom “Corseaux” jersey sweater, he showed it off during College GameDay.

Cory says going to the 2019 National Championship was one of the greatest experiences as a business owner.

“It was the highlight of such an awesome year,” Cory says. “Sparkle City was everywhere. It was the greatest day meeting our customers. I think I cried happy tears like five times that day because all the hustle and hard work that went into that season really showed.”

Though the brand is now based in New Orleans, Sparkle City’s LSU game-day pieces can be found in boutiques around Baton Rouge like Hemline, Bella Bella, Perlis and Frock Candy.

Cory says big things are happening for Sparkle City, and ultimately she hopes that her pieces allow fans to feel beautiful and comfortable for any kind of event.

“We want to make everyone feel good in what they’re wearing, whether they’re going to a game or going to an event,” Cory says. “We want our customers to be able to dress up, feel cute and feel confident. Who doesn’t feel good when they’re wearing sparkles?” sparklecity.com