Browsing through Baton Rouge clay artist Ghada Henagan’s pottery collection, you will see plate sets with teal and mustard leaf prints, white and sandy brown planters with the outline of a pelican, baby blue hand-pinched bowls for pet food, and white mugs with a plump chicken eating feed off a green leaf.

The animals and nature etched into the pottery aren’t random, though. Each design has its own story. Henagan grew up in a small village in Lebanon. Since moving to the United States in 2006, she carries vivid memories of her hometown. She was inspired to paint chickens on her pottery after remembering a time when she was younger and her family was displaced due to a war. They had to leave in a hurry, and when her brother went back to their home a week later he grabbed the family chickens. Hoping to save them, he put them in a bag. But by the time he returned to the family, all except one of the chickens were dead.

For the 47-year-old, the chicken design represents her bittersweet memories of her family’s chickens that perished during the plight.

Though her design inspiration is personal, Henagan says her pieces are not only about her.

“I hope that people will connect to my work with their own stories or memories,” she says. 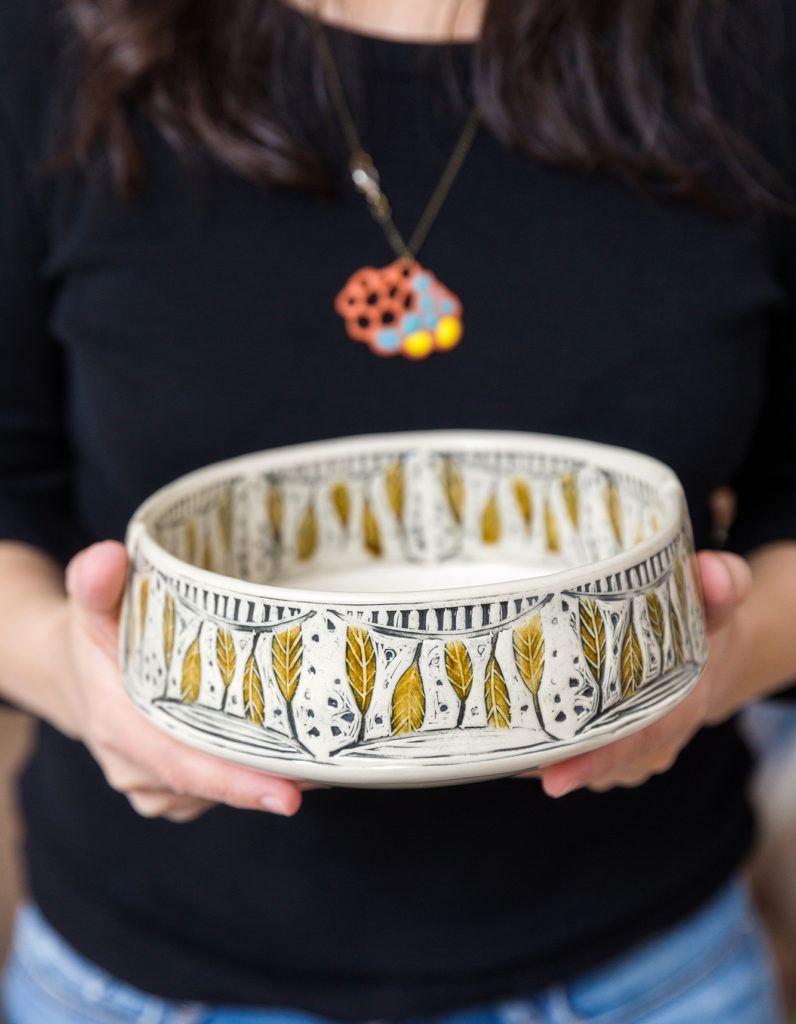 Instead of using a pottery wheel, she sculpts her pottery by hand at her dining room table. She likes the slower pace of hand building and the freedom to add texture and designs on the slab of clay before forming it.

Each piece is complete with a delicate hand-etched or stamped design, watercolor-like transparent glaze colors and a homey flair.

“I’m in love with what I do, and I can’t imagine doing anything else,” Henagan says.

Before she became a full-time clay artist, Henagan worked in the accounting department of a hospital in Lebanon. Her sister, a nun, knew she was passionate about art. She told Henagan to leave her job and create religious ceramics.

She started by creating clay crosses, candle holders and decorative tiles. It wasn’t until she moved to the United States that she learned about the large world of functional pottery. Now, she sells her work at Mid City Makers Market, Baton Rouge Arts Market and on her website.

“I hope that people find something in my shop to give them joy,” Henagan says. “If it adds a little bit of joy to their life, that’s enough for me.” ghadahenaganceramics.com