Hope Johnson’s family lives in everything she creates.

Inside her backyard studio in Central, the surface designer works on her art. Her three children are never far. Climb the studio’s wooden step ladder, and you’ll find them playing in an upstairs loft.

Some days, her kiddos keep to themselves, coloring or reading. Other times, they’ll join mom in painting.

This is how Johnson’s second textile collection—“Dear Isla,” released this March by Cotton + Steel—came together. She and her young daughter, Isla, drew swirly rainbows, suns and clouds in muted colors and pastels.

“It was that moment in motherhood where you just have to stop and paint, and ignore the house and all the things you have to do. That collection is such a tribute to her,” she says.

It’s also how her brand-new wallpaper collection came together.

Johnson wanted to turn her work into a custom wallpaper for Java Mama, the family-friendly cafe in Central she co-owns with her sister. But during a year spent mostly at home with her kids, she found herself painting more than ever—and with more than enough material to digitize and convert to her first wallpaper line.

The collection of 19 patterns—with more to come this fall—debuted in late April. The wallpaper rolls ship to interior designers and decor enthusiasts around the country.

Checked with gingham patterns and floral prints in shades of warm mustard, soothing olive and moody charcoal, Johnson wanted the designs to look plucked right out of a vintage home.

On her interiors moodboard: architectural Victorian-era houses; folky, romantic vignettes from the arts and crafts movement; and antique farmhouses from the 1800s and early 1900s. She loves a funky 1970s color palette, too.

“My aunt looked at one of my patterns and said it was exactly like what we took down at my uncle’s house in the ’70s. And it was like, the biggest compliment ever,” Johnson says. “If my designs can feel like that but a little bit modern, then that’s the goal.”

Her family is embedded in her wallpaper designs, too. On her “Forest Friends” print, sage green animals float whimsically on a cloud-colored background. Each animal’s name is written in a cursive penned by Johnson’s grandmother.

“I just love her handwriting. It’s not formal calligraphy. It’s so organic,” she says. “And if you knew my grandmother, organic is definitely a good word. She was an antique collector her whole life.” 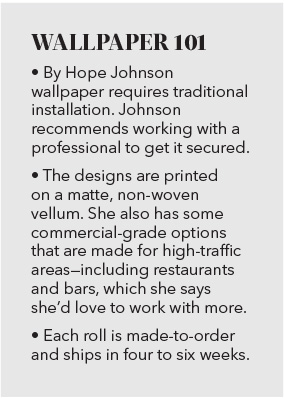 Johnson studied art at LSU and later became a stationery and wedding invitation designer. She still has two letterpresses that are nearly 100 years old. But she says her passion for art and interiors was truly born inside her own childhood home, a 1911 Victorian-style house that was originally built downtown and later moved to Central.

Today, she likens her love for homes to an “obsession.” She went as far as to create a 20-page guide to “The Habits of Being a Homebody,” a digital handbook customers can download from her website. It covers sustainability at home, the art of collecting, and how to maintain an organized space with kids.

“I’m not an interior designer, but I have always had a knack for making the home feel good,” she says. “I don’t think you have to have a degree or be an interior designer to have that feeling. I’m a big advocate for being a homebody and giving people permission to make their home feel how they want it to.”

Johnson is looking forward to the summer. She has a lot on her agenda: working on new wallpaper and textile collections, and even exploring upholstery fabrics. But the year’s sunniest, longest days are when she feels most inspired and makes the most art. Besides, her kids will be home with her all day.

“The artwork I fall in love with the most is the stuff that happens by accident,” she says. “Most times, next to my kids.” byhopejohnson.com

What attendees wore to the Baton Rouge Fashion Experience