Things have a way of working themselves out.

That’s what Denise Cone learned after her daughter, business partner and other half, Danielle Kerr, graduated from college and took a job more than 1,000 miles away in Phoenix, Arizona.

Shortly after the mother-daughter duo moved to Baton Rouge, they formed Sweet Leather Goods, a line of patterned leather bags and accessories. They sold their products for years at local arts markets before opening a brick-and-mortar in Mid City at the end of 2016.

But the store they had meticulously labored over together closed months before Kerr graduated in 2018. It left Cone in a bit of a rut.

“Danielle was my baby and my business partner,” Cone says. “So not only did my business close, but my kid left.”

It didn’t take long, though, for Cone to start a new project. Today, the artist and educator is busy working on a new line of mixed-media artwork and home goods: Meraki Handmade Goods.

It’s Sweet Leather Goods reimagined. Her work has been readjusted to fit this new stage in her life, one focused on traveling and collaborating with a brand-new business partner: her new husband.

It was during her months-long hiatus from doing art shows that she met woodworker Mike Cone through a dating app. While Mike plays many roles in Cone’s life, these days she prefers to affectionately call him her “partner in crime.”

“We were kind of in the same place in life and looking for a new direction,” she says, “so when we met, his creative bug got sparked and resparked mine. We started making things together, and then Meraki came in.”

The name comes from a Greek word used to describe putting your soul into the work you do, and it’s reflective of how the changes in Cone’s life have transformed the way she creates.

The process goes a little something like this: She and Mike will go on walks together, scouring the ground for some good pieces of driftwood. He will dry out the wood and cut it into bowls. Then, she will come in and fill the cracks with resin or throw some paint into the mix. 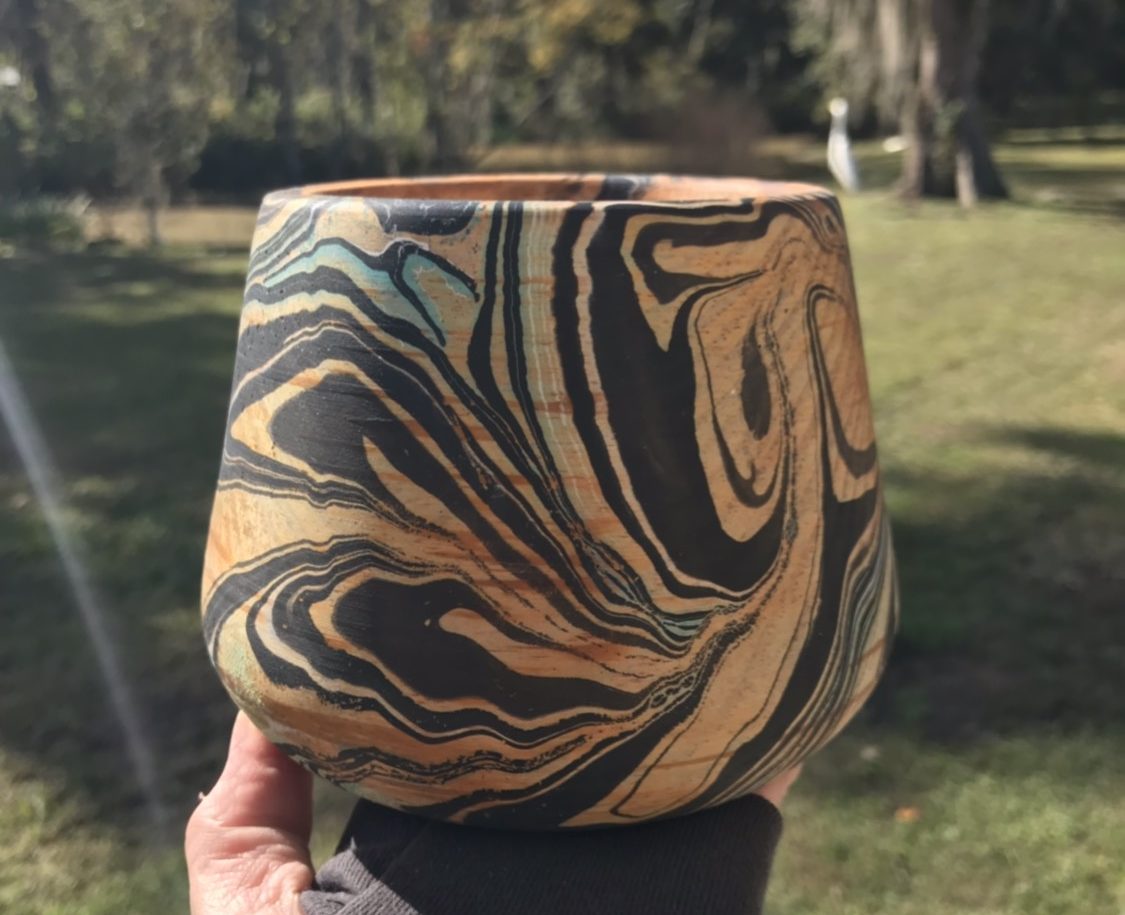 Cone will continue to make leather bags, magazine holders, journals and decorative items similar to what she used to create for Sweet Leather. Now, though, she’s also incorporating mixed-media pieces for the home. The pieces are centered on a kind of functional beauty Cone has come to appreciate over the years. Think a wooden bowl with acrylic marbling or a metal side table with a marble inset.

“Everybody likes to be surrounded by beautiful things,” Cone says.

Stepping away from running a physical shop has given Cone more flexibility in her creating, allowing her imagination to dream up one-of-a-kind pieces instead of being confined by having to keep certain items in stock.

Meraki will hit the Baton Rouge arts markets again this fall, setting up shop at the Mid City Makers Market and White Light Night once their home studio is complete. The duo will also sell their pieces at Thibodaux markets and on their Facebook page. “Usually, wherever you found Sweet Leather, you’ll find us again,” Cone says.

For now, Cone sits in her new home in Thibodaux—where she originally grew up—looking out the window as the ducks go by, allowing the simplicity of nature and her husband’s creativity to inspire new ideas. She’s just itching to put them all into fruition once their studio is up and running.

“You know what’s funny is when you’re not looking for something—that’s usually when you find it,” she says. “I lost Danielle, but I certainly gained. That’s for sure.” Find Meraki Handmade Goods on Facebook.