Susan Charlet has gotten used to it. When people first step inside her Barlow boutique, it’s always a chorus of the same exclamations: “Oh my gosh,” or “It’s so cute.”

And inevitably, the next reaction usually is: “This place is much roomier than it looks from the outside.”

The exterior looks like a compact box on wheels. Wrapped in stylish pink, yellow and blue stripes and crowned by a pink neon sign that reads “Barlow,” it’s the kind of structure that immediately catches your eye and makes you want to peek inside. Whitewashed wood floors and built-in white shelving help the interior feel light and airy. An abstract mural in blue, pink and gold—painted on one wall by Charlet’s son, Cage—adds personality.

Like a well-organized walk-in closet, everything has its place. Dresses and blouses hang neatly from rose gold-capped velvet hangers. Hats and bags are perched on shelves. There’s even a private dressing room with a floor-to-ceiling mirror and a bench. Shoppers can try on dressy-casual shirts and dresses from brands like English Factory, THML, En Saison, AG Jeans and Articles of Society.

Charlet and her husband, Don, had long dreamed of opening a clothing boutique. They even had a name: Barlow, after a boat they’d sailed on in the British Virgin Islands.

In 2019, they started work on the store. But instead of opening a brick-and-mortar, they decided to take a risk on a different concept.

“I’d been following similar (fashion) trucks out of Dallas, but I hadn’t seen anything like them here in Baton Rouge,” Charlet says. “I thought: How fun would it be to be able to bring a boutique to a high school on a Friday afternoon, so the teachers can shop on their breaks? Or to a hospital, where staff might normally get off work too late to shop at a store? We could bring it to different neighborhoods or parties and make shopping into more of an experience.”

The Charlets originally planned to build Barlow inside an old airstream, but the ceilings turned out to be too low and the space too cramped.

Instead, they built a trailer from scratch. Don sketched to-scale drawings and worked with fabricators to build the shop’s body and interior cabinetry. The process took nearly a year, but the boutique was finally ready to open by April 2020.

In the meantime, the boutique will continue venturing all over the Capital Region and beyond.

Opening in the midst of the pandemic derailed some of Barlow’s early travel plans, but it finally hit the road to the Round Top Antiques Show last fall and this past spring.

Sitting in the open fields of rural Texas, leisurely sipping margaritas at 4 p.m., the Charlets met people from all over the world—and plenty of visiting Louisianans, too. Next, they’ll drive to Nashville for a summer pop-up. More road trips are sure to come.

It’s just what the Charlets dreamed of when deciding to open a mobile shop.

“We can take it anywhere,” Charlet says.

Baton Rouge’s food truck culture has evolved consistently over the past decade. Now, other types of companies are getting in on the mobile business model.

A handful of cocktail carts roam the region, available to rent for events or parties. More recently, moveable boutiques like Barlow have begun selling items such as clothing and art.

The biggest growth yet will come with the fall 2021 opening of Urban Traders, a retail park with leasable vintage trailers in Mid City.

Pink- and yellow-hued trailers will rest underneath sun-shielding canopies in a lot adorned with murals, says developer Melanie Way. There will be picnic tables and a large screen for movie nights. Eventually, Way imagines hosting events like fashion shows.

“It’s going to have a nostalgic feel. Everybody just loves vintage campers, whether or not you’ve camped in one. They’re great spaces to be creative in,” she says. 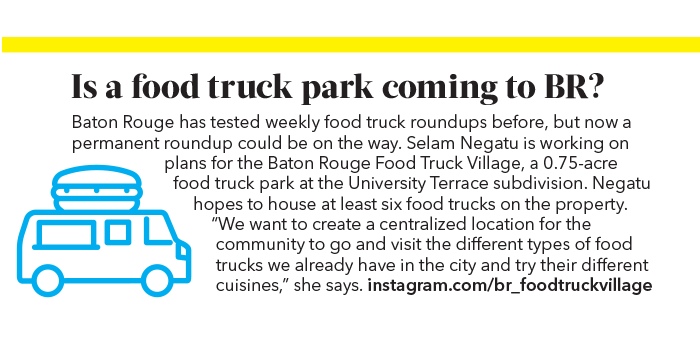 Work for the first phase is currently underway on Government Street, about two blocks from Curbside. Initially, the park will feature four boutiques, two food and beverage venues, and green space for music and movies. It is expected to be completed by September or October.

Way has pre-leased two of the spots to her own concepts: Red Stick Edit, a T-shirt and gift boutique with curated local goods; and Coffee Star/Snow, a shop serving cold coffees and snoballs.

As of press time, she was in talks with a vintage shop, a regional boutique and a specialty ice cream shop about possibly leasing some of the open slots.

“I wanted to make opportunities for creative entrepreneurs and budding business owners,” Way says. “A brick-and-mortar store is so expensive. From a business standpoint, this makes a lot of sense.”

Susan Charlet, who envisions someday opening a storefront for Barlow, had a similar perspective. She says she was attracted to the mobile model because it is much more cost effective than buying or leasing a building.

Way has been working out of an Airstream she converted into a home office more than 10 years ago, so she’s familiar with building, designing and decorating mobile spaces. She’ll outfit all the trailers herself and then lease them to tenants.

And just like Charlet drew Barlow’s inspiration from Dallas—where mobile boutiques have rolled around the city for the past decade—Way has looked to Austin’s food truck parks for ideas. In some parts of the Texas capital, you’ll find multiple food parks within blocks of each other.

“I think when visitors step into our lot, they’re going to see a welcoming, inclusive space—a place to meet their friends, bring their kids,” Way says.

Parking will be limited at the Urban Traders, but Way hopes the recently completed pedestrian-friendly upgrades to Government Street will be perfectly timed for its grand opening.

“We have to get people used to walking somewhere rather than driving,” she says. “The more development we have here, that synergy will just sort of happen.” 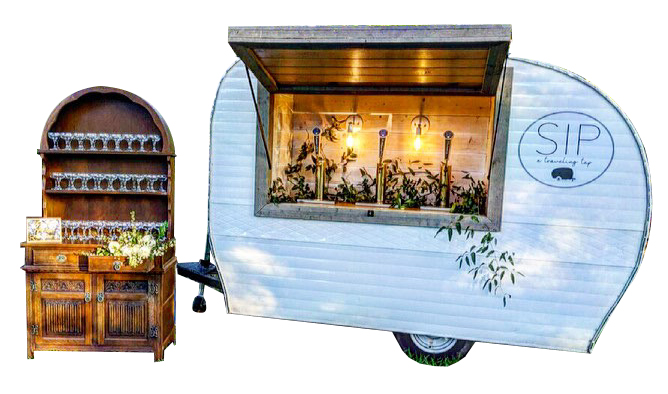 A few cocktail trailers around town:

Nearly 2,000 miles from Baton Rouge, in the middle of the Mojave Desert, David Aaron Smith and Katelyn Doherty fell in love.

The couple met while working together at Villa Anita, a two-acre Airbnb property in the remote Death Valley town of Tecopa, California.

All of its buildings are made from repurposed materials, including one rental made from pieces of a salvaged boat and another suite made entirely of glass bottles. “It’s like being inside a kaleidoscope,” Doherty says, describing the village’s “Bottle Cottage.”

During their three years together at Villa Anita, Smith and Doherty fell in love not just with each other, but with a lifestyle that emphasizes simplicity and sustainability. With little cell service and not even a grocery store in town, their days revolved around making pieces for the on-site nonprofit art museum, cooking from the village’s garden and getting lost in conversation with travelers from all over the world.

It’s the same kind of living they wanted to replicate when they relocated during the pandemic to Smith’s hometown of Gonzales. One of their first quarantine projects was converting a 1950s canned-ham-style metal trailer to a mobile art boutique.

After they gutted and restored the interior, Doherty painted the floors sage green and covered the walls and ceilings with a swirled mural. The couple affixed their artwork to the walls in carefully arranged mini galleries, each one fitted in secondhand frames. In one corner, they installed a clothing rod to stock with vintage clothing finds. A rug and some secondhand storage furniture provided the finishing touches. Art to Geaux was ready to hit the road.

Since launching earlier this year, the shop has traveled around south Louisiana, from Holden to New Orleans. The couple’s favorite experience so far was the BRtistic Festival at Tin Roof Brewery in April.

“We’ve been all around the region, but the best response and support we saw was here in Baton Rouge,” Smith says.

During an event like BRtistic, shoppers enter the trailer to the sounds of a scratchy record playing on the turntable. Doherty’s jewelry is spread on a console table, each piece handmade from recycled beads, wood or metal carved into stars, swirls and zigzags. Suede fringe jackets, crocheted sweaters, camp shirts and matching sets hang from the clothing rack.

A mix of the couple’s artwork is for sale on the walls.

They keep extra artwork tucked away in drawers. Once something gets sold, a new piece goes up on the wall.

“The space keeps evolving each hour we sit there,” Doherty says.

When Art to Geaux is not traveling, it’s parked on Smith’s family’s property in Gonzales, a sprawling lot with two bungalows and vast green fields full of leafy trees and buzzing bugs.

Just down the road, there’s a vacant building that once housed the family’s antique shop.

Art to Geaux has given the couple a taste for running a shop, and now they are thinking about reviving the old antique store in some way, too.

Smith and Doherty are not sure yet what that looks like—whether it’s restoring the store, figuring out a way to incorporate antiques into the mobile model, or even selling furniture and art directly from their home.

But if the past year has proven anything to them, it’s that nothing is off the table.

“Retail is changing,” Smith says. “Now, we’re thinking: How do we (provide that) estate-sale experience, where people can buy things off the walls?”

The couple is certain of one thing, though. Creating a mobile shop has already opened new doors and connected them to so many people.

It’s a similar feeling of limitless opportunities Susan Charlet describes when thinking of the places she’s brought Barlow. It’s how Melanie Way envisions Urban Traders building bridges within and beyond our community, too.

This is surely only the beginning of the road.