We showed up early to this spring’s inaugural Baton Rouge Fashion Experience to capture some of the unique looks of those in attendance. Hosted by Project Innovate Studios, the event was a multifaceted fashion show accented with musical performances, poetry readings and film previews. As exciting as the onstage looks were, the audience was also full of creatives and arts enthusiasts. Here, you’ll find just a handful of the styles they sported—all of them sharp, many swervy and each embodying the ever-happening intersection of art and fashion. 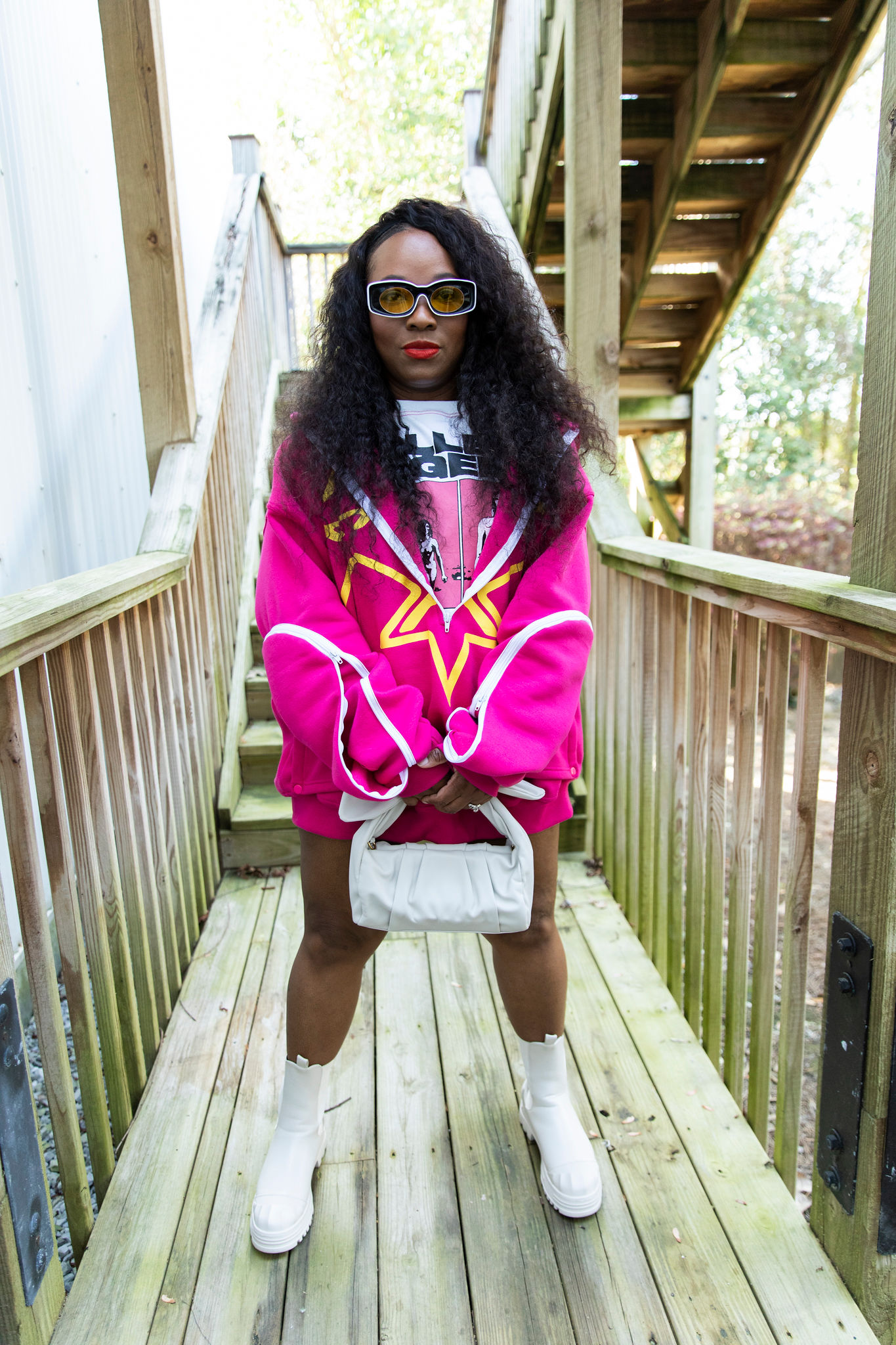 Scott, 47, is a medical office assistant from New Orleans and the mother of Pharez Scott, the mind behind GPU Terminal, one of the fashion brands featured in the show.

All-in-one hoodie (a GPU Terminal original) with detachable hood and large zipper pouches on the sleeves. The glasses were a gift from her husband.

“Edgy, trendy—and that’s about it.” And of course, she loves stunting in her son’s creations. 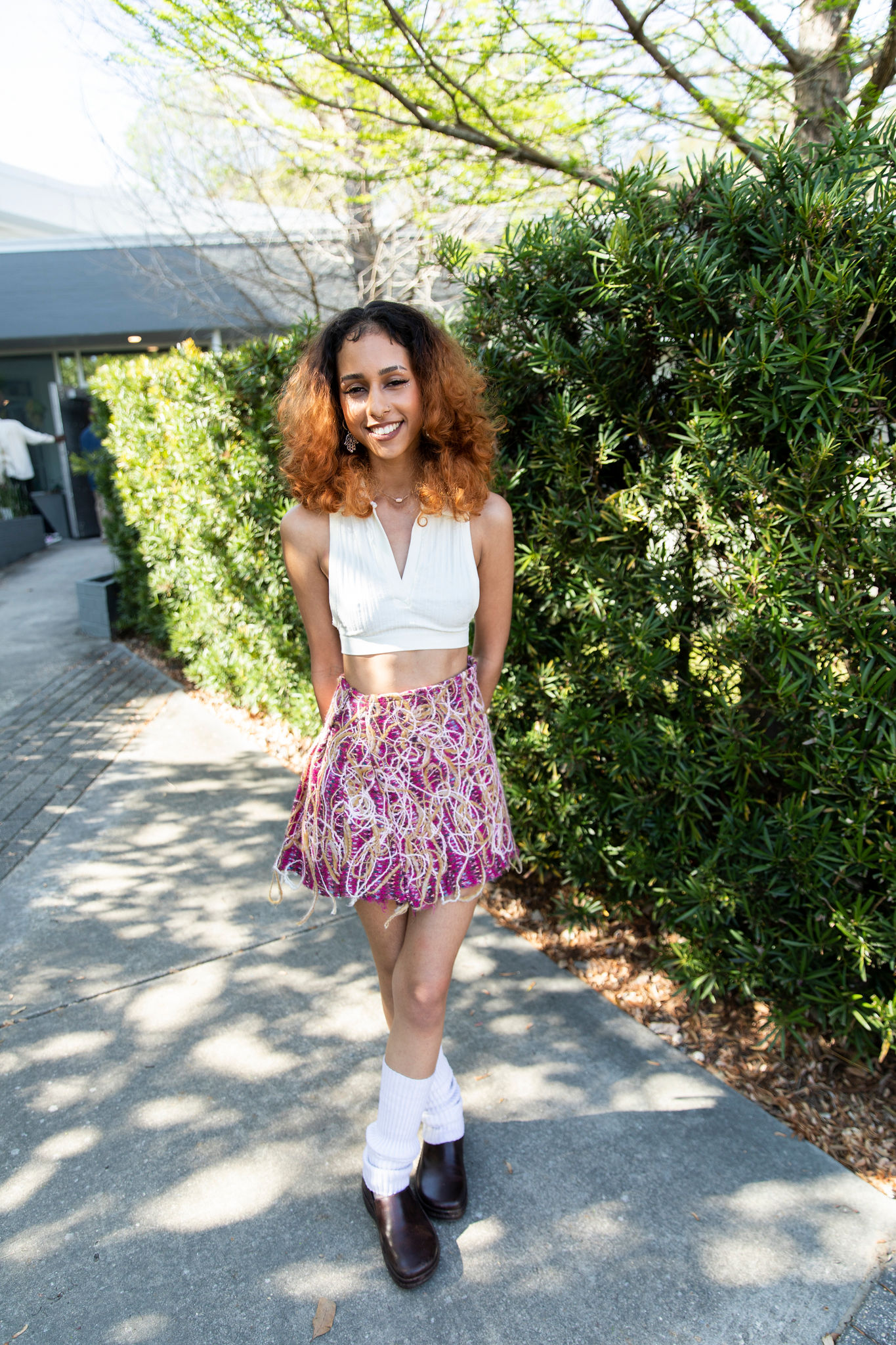 Andalib, 20, studies French at LSU and is an artist and musician. She also works as a caretaker for a young girl with autism.

The top was a loan from her friend Emma Kerwin (pictured left) and the rose-gold necklace was a gift from her friends. The skirt was from +234 (one of the designers featured in the fashion show). “We were going for a schoolgirl theme,” she says.

“I don’t feel like it’s as fully developed as I want it to be … But I’ve been loving looser clothes and styles; it’s just easier to work with,” she says. She tends to match her color palettes to her current hair color, drawing from knowledge of complementary shades that she’s developed through her work in visual art. 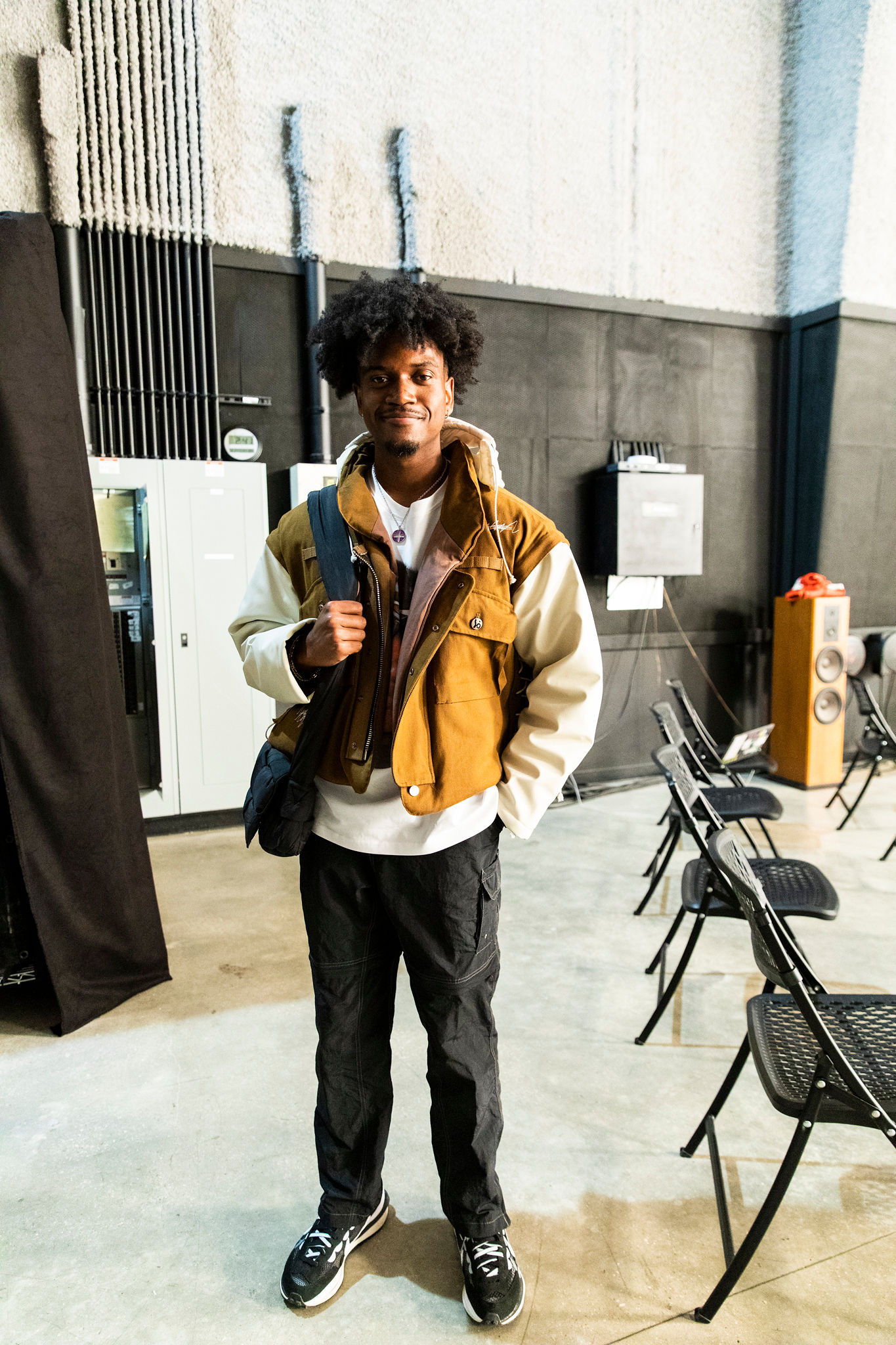 Watson is an industrial engineering major at LSU and a Houston native. He says he learned of Project Innovate through a friend who’s involved with the collective and knew he had to come to the show.

Watson has recently been exploring casual styles with an upscale, technical flare. Lots of hiking-inspired gear and nylon. 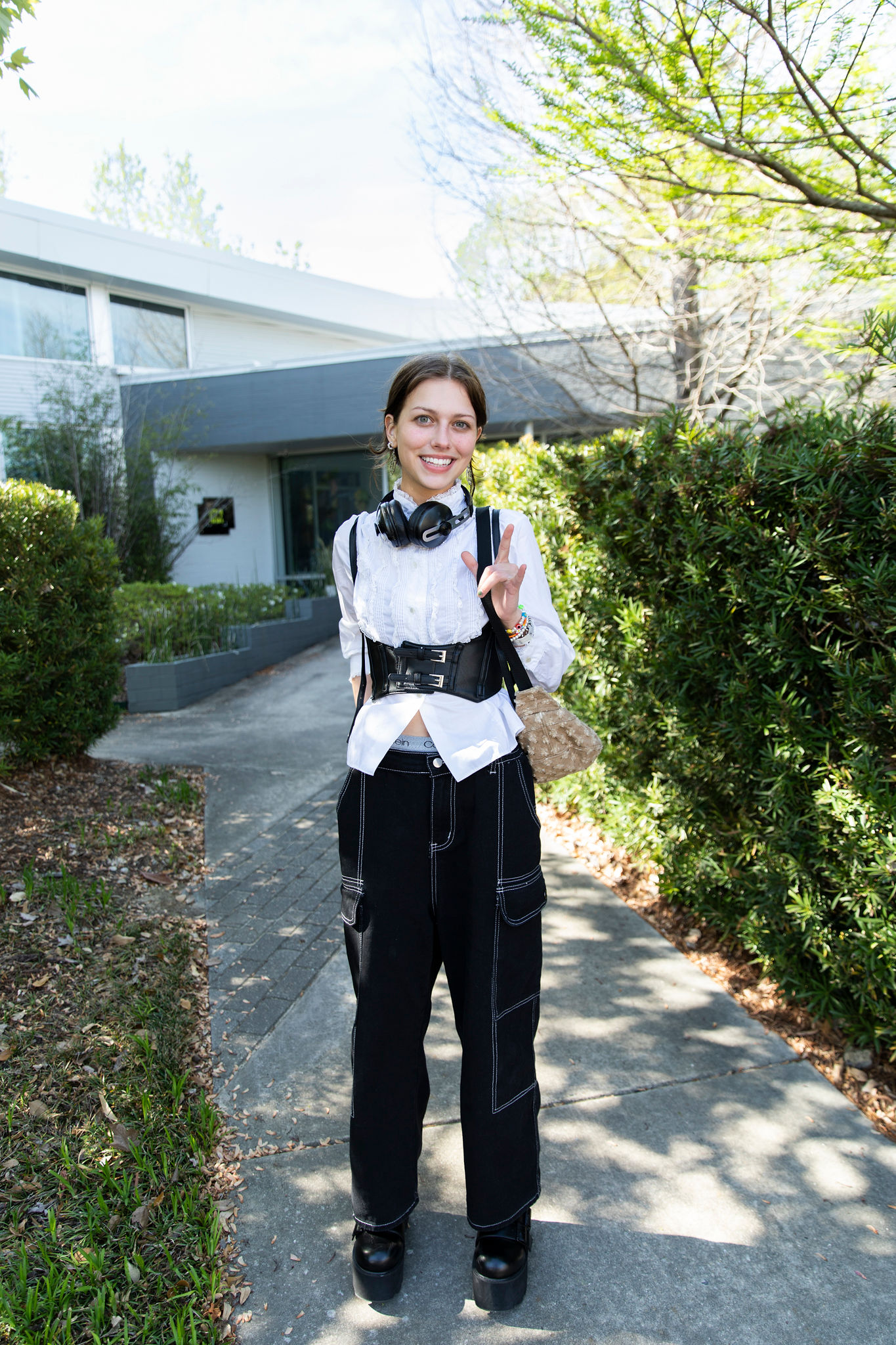 Kerwin is a 20-year-old studio art student at LSU, cashier at Private Stock and Baton Rouge native. She says she’s been watching Project Innovate Studios grow from the very beginning.

Platform shoes courtesy her mom; thrifted carpenter pants, corset and shirt; headphones by Sennheiser; handmade bracelets. The knuckle duster earrings were a gift from a friend, and the bag is a converted Supreme bucket hat (her own work).

“It’s a lot of random stuff,” she says. She’s an avid thrift-hound and “a shameless Instagram shopper.”

Williams, 20, is an artist and graphic designer from New Iberia. He sits on the Project Innovate Studios committee and designed the event’s flyers. He enjoys painting and tattoo art.

Coat from ASOS with custom graphics he painted himself; custom Nike Reaper Dunks by Los Angeles artist Warren Lora, worn out from skating and patched with his own designs. The rest was thrifted.

Williams loves to skate, so he favors rugged clothing that can stand up to hard wear. He draws heavy inspiration from street style. 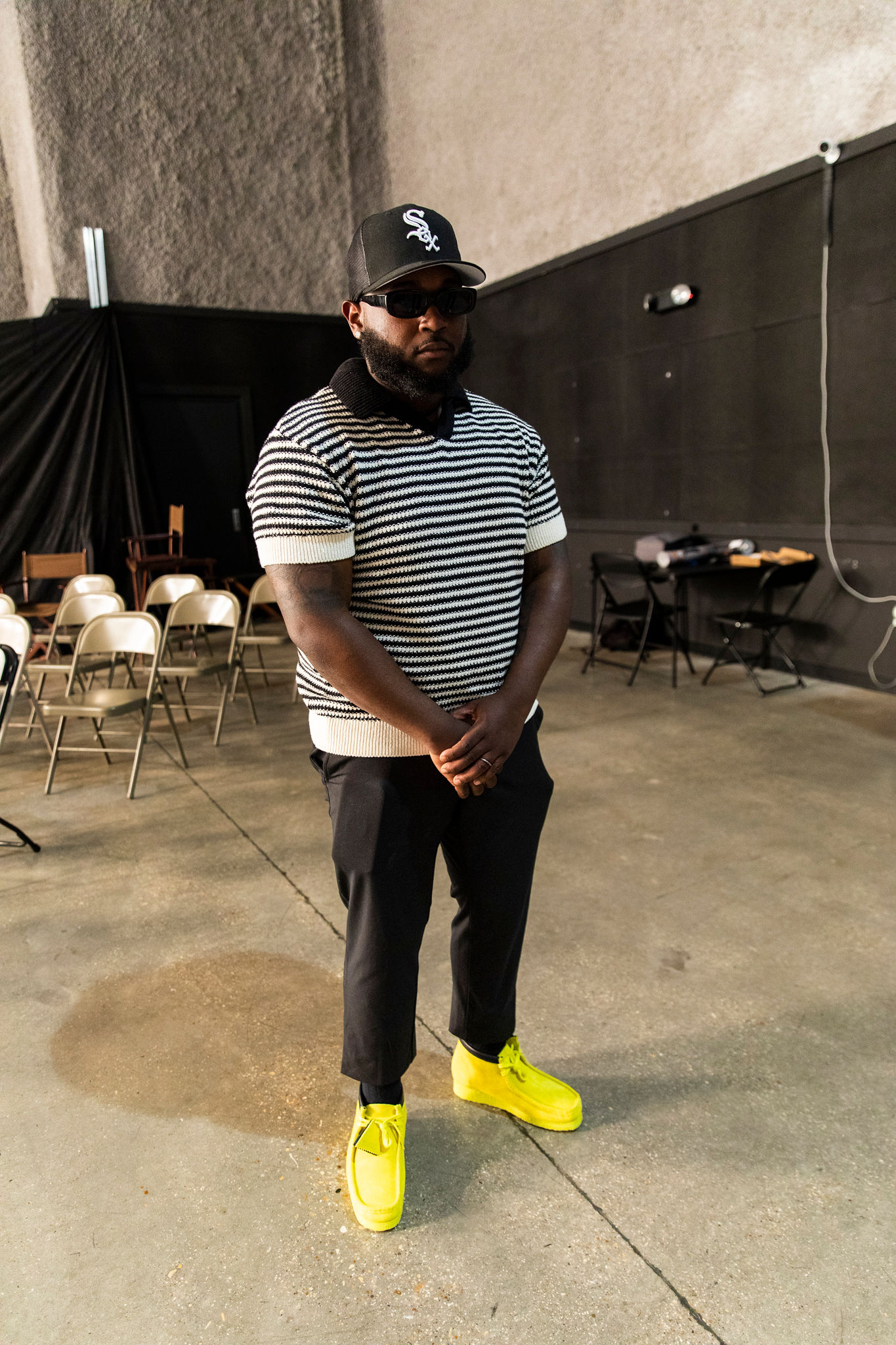 Utsey is a 22-year-old rapper from Washington, D.C., and was one of the five rappers who performed on the runway between fashion walks at the show.

“It’s kind of similar to my music: If I’m feeling a certain type of way this day, I’ll dress that way. If I’m feeling really edgy, I might just do (something crazy). But I like to keep it simple (too).” 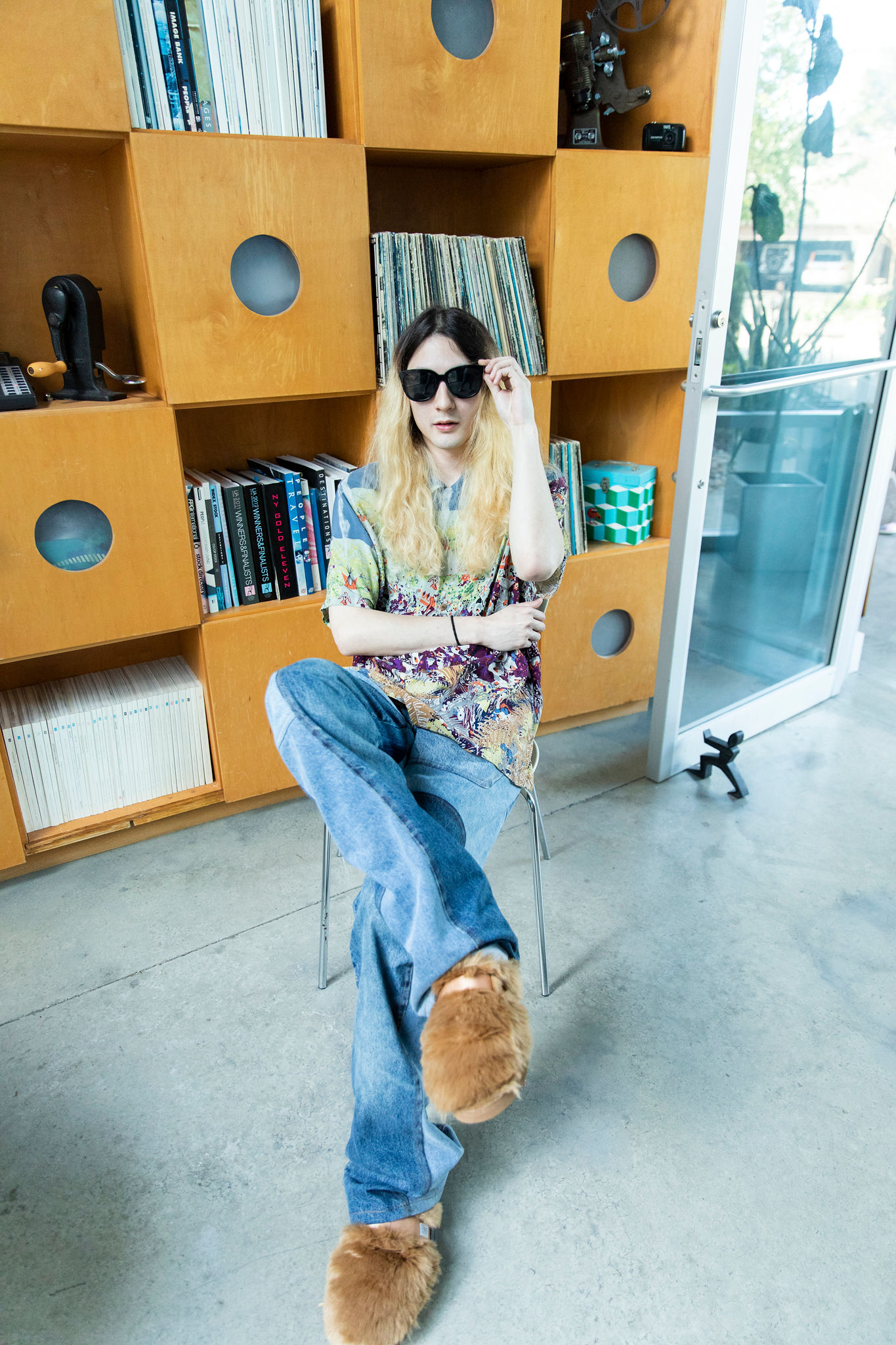 Rees, 22, originally hails from the New Orleans West Bank, graduated from LSU in fashion merchandising and works at Sneaker Politics.

Shirt from Kapital, jeans from WHO DECIDES WAR and slides from Suicoke.

Rees favors pieces that display attention to detail and quality craftsmanship—and, of course, a dose of maximalist flair. 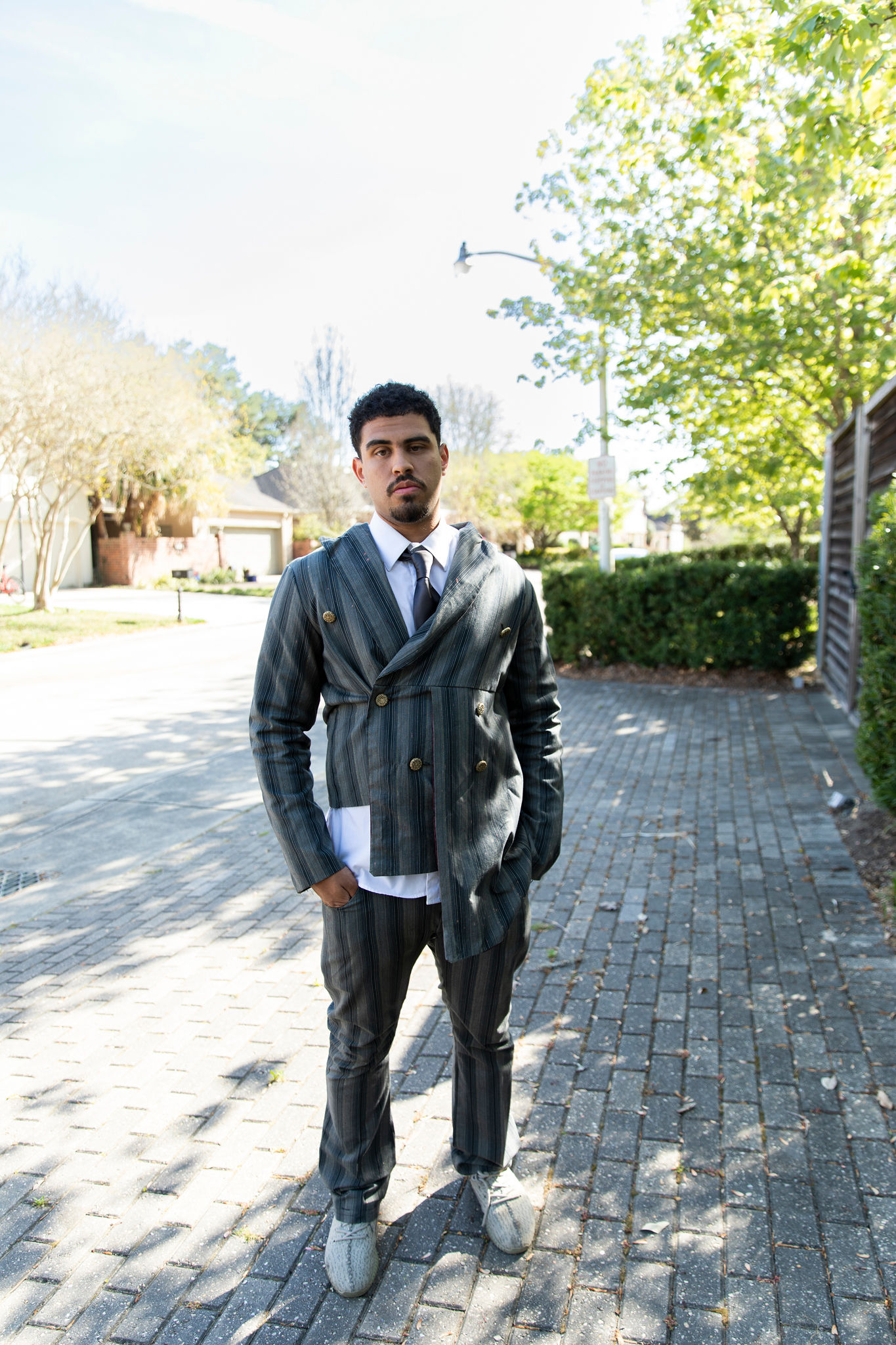 Michael is a 22-year-old fashion designer from Gretna.

His own: Michael has recently made his foray into tailoring, and this suit is one of his first creations in that vein. It’s a slim suit with a double-breasted jacket displaying layered asymmetrical panels near the waistline, complete with gold hardware to complement the green hues in the fabric.

“I don’t really go out in public and be flashy,” Michael says. “This is my first time being flashy all year. Other than that, I’m really in, like, Crocs, sweatpants, hoodies.” 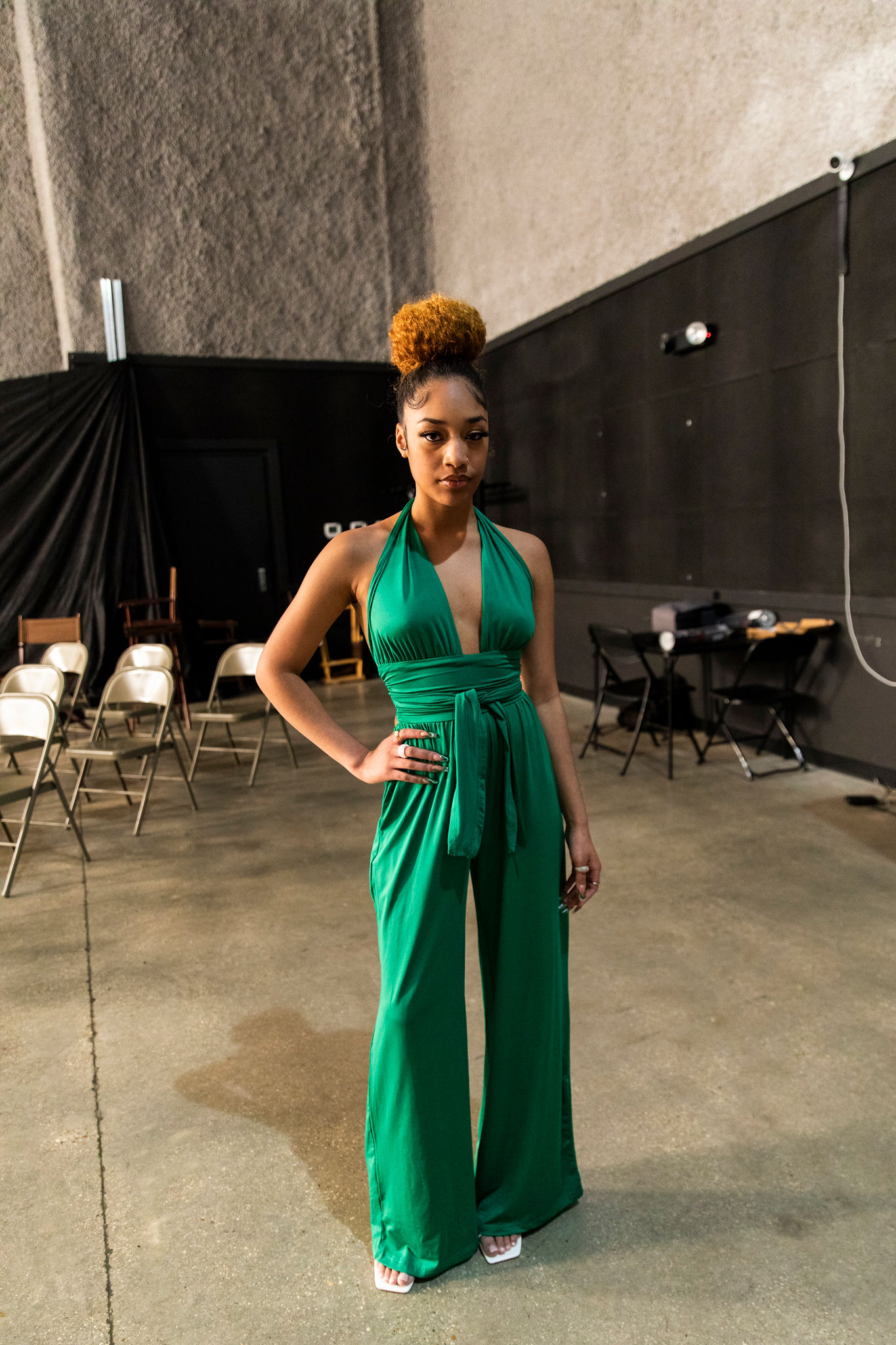 “As I’m getting older, I feel like I’m getting a little more timeless, a little more neutral,” she says. “I like to wear good-fitting basics and things that I’m comfy in—but I like to sometimes be uncomfortable just for the look.”

Burks, 22, is an artist, photographer and videographer from Baton Rouge. He’s also recently been exploring furniture design and is a member of the Project Innovate Studios committee.

A Christopher Michael original. Burks and Michael collaborated on the design, drawing inspiration from suits by Off-White and Undercover as well as images of old-school cartel bosses known as mob stars.

“I can’t really describe my style because I feel like I could wear anything.” One day it may be shorts and slides and, the next—case in point—a custom-tailored suit.

Forget the fads: 4 small steps to get fit and stay that way [Sponsored]