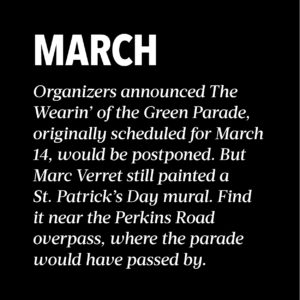 It was one the first signs things might get bad here.

With Louisiana’s count of COVID-19 cases nearing 20, rumors swirled that Baton Rouge’s biggest parade could be canceled. New Orleans had already canceled its St. Patrick’s Day festivities. So had Ireland.

Sure enough, the Wearin’ of the Green Parade was called off two days before it was scheduled to roll. At the time, organizers promised it would roll later in 2020. None of us could have dreamed then how fundamentally our lives would be altered in the coming months—maybe years, maybe forever.

But back then, Baton Rouge was shook. The parade’s statement on Facebook was shared more than 150 times. The deluge of comments expressed a mix of gratitude toward organizers for helping “flatten the curve” and despair that the Garden District and Perkins Road wouldn’t get their annual bath of green beads.

That afternoon, away from the meltdown that was happening on the internet, Marc Verret was in the middle of painting his own surprise.

Verret, whose artist name is Marc Fresh, was set up underneath a bridge along the parade route. He was armed with a roller, buckets of paint, cans of spray paint—and a brilliant mural idea. On top of a wall covered with Care Bear graffiti and swear words, he was painting the face of Billie Eilish, the teen pop star his daughter was constantly listening to.

Eilish is known for crying black tears in her video for “When the Party’s Over.” But Verret’s piece was called “Billie Irish,” and her tears looked more like a glittering Irish rainbow. The finishing touch? Wavy green hair.

“That mural was just me being funny,” he says, laughing. “I knew there’d be loads of people who would walk by it, and they’d say, ‘Oh my god, let’s take a pic by this.’”

Verret was camped out off Perkins Road painting the mural for a full day. Halfway through it, he got a call from a friend. The parade was canceled, his friend said. Verret pushed on anyway.

“I didn’t want to not finish it,” he says. “I was bummed that it wouldn’t get the sightseers. But it turned out it kind of blew up digitally.”

Yes—while no paradegoers ever took drunk selfies in front of Verret’s masterpiece, it did cause a stir on social media. Verret’s Instagram post of the mural now has nearly 4,000 likes, including Billie Eilish herself.

The reaction has made the mural a 2020 favorite for Verret, who estimates he has about 50 other murals around Baton Rouge.

The Slidell native has lived here since he arrived to study drawing and painting at LSU in 1999. After graduating, he worked odd jobs before getting involved in the film industry, creating graffiti and backdrops for sets. Soon, he was splashing colorful murals over our city’s restaurants, businesses and homes. He attributes his growth as an artist to his schoolteachers and organizations like The Walls Project.

Like many businesses, he briefly worried his work would slow down during the stay-at-home order. He is a full-time artist whose business survives on commissioned murals and paintings. But so far, there’s been just as much of a need for art as ever.

Verret spent the spring painting murals over boarded-up business windows in an eerily quiet New Orleans. He spent the summer collaborating with the artists who painted the Black Lives Matter mural at Boil & Roux’s parking lot in Baton Rouge. He’s had some personal and commercial clients sprinkled in between. He even painted a sunshine-yellow smiley face mural for a kid’s game room at the beginning of quarantine.

And Verret is still getting messages from people who accidentally stumble upon the St. Patrick’s Day mural while they’re walking in the area.

It’s made him think he should start a map of all the hidden-gem murals around town so people can explore them, especially now that we’re all spending more time outside.

Because uncovering our city’s art, he says, is like a treasure hunt. Find him on Instagram @marcfreshart