There’s an old cliche in college football that says, “If you have two quarterbacks, you have none.” In many cases, that may be true. If two players are fighting for one starting job and neither has managed to stand out, it can often spell problems for the offense. But applying that adage to LSU this season always felt unfair.

Sure, the Tigers were entering fall camp in what seemed like a pretty tight quarterback battle between senior Myles Brennan and sophomore Max Johnson. But in many ways, it felt like a win-win scenario for LSU.

That competition has been temporarily thrown out the window due to the unfortunate absence of Brennan, who suffered what was simply described by LSU as a “left arm injury.” It has since been widely reported that the Long Beach, Mississippi, native broke a bone in his non-throwing arm that required surgery, which was completed this week. 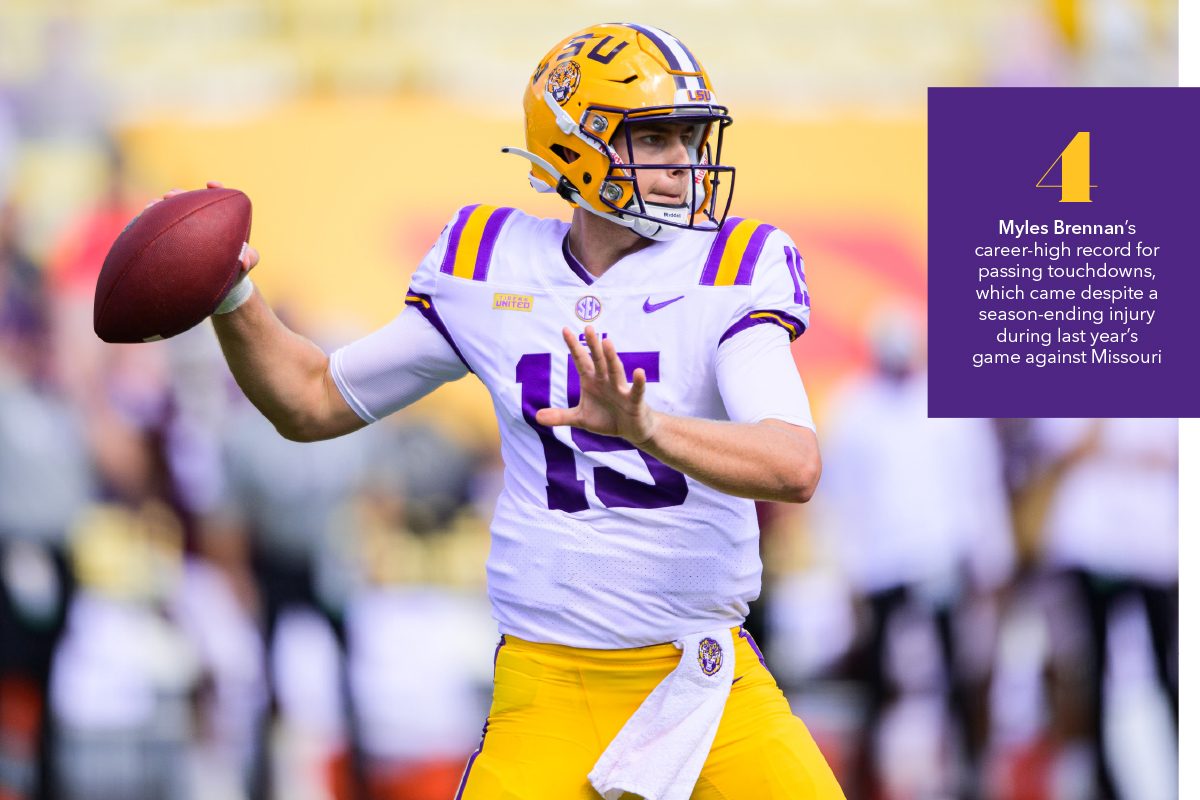 “Myles Brennan suffered a severe injury that will require surgery,” LSU coach Ed Orgeron said in a news release. “His timeline is yet to be determined. Myles has done everything we have asked of him this summer and was in the fight to be the starting quarterback at LSU.”

Surgery went really well. Thank y’all for all the prayers. Gods got me 🙏🏼

With Brennan out for the foreseeable future, the job is now in Johnson’s hands—at least for the time being.

The Tigers’ season opener at UCLA is exactly one month away, and they’ll spend all of fall camp with the sophomore signal-caller taking nearly all the first-team reps.

“Obviously, Max is going to be our starter, but he’s got to have a great camp,” Orgeron said in his weekly appearance on 104.5 ESPN Baton Rouge. “The depth chart is etched in sand. He knows he’s got to perform, but I believe in Max, just like I believe in Myles. I think we’ve got us a great quarterback, a great championship quarterback … We’ve got to keep Max healthy. That’s going to be the key.”

Before Brennan’s injury, the quarterback competition was truly beginning to heat up. On one hand, you had Brennan—the older, wiser veteran who has been on campus since 2017 and got to learn under the tutelage of the Heisman Trophy-winning Joe Burrow and the now-NFL offensive coordinator Joe Brady.

In the opposite corner was Johnson—the younger, quicker lefty who is the son of a Super Bowl-winning quarterback and salvaged the Tigers’ season in 2020 by rattling off two huge wins against a pair of conference rivals in then-No. 6 Florida and Ole Miss.

Brennan won the starting job outright a year ago before a freak injury ended his season just three games into the year—an unfortunate re-occurrence for the senior.

It was late in the first quarter, and LSU had the ball second and goal from the Missouri 2-yard line. Brennan took the snap and shuffled slightly to his right, feeling some pressure from a Tiger defender. He lobbed a pass through traffic and into the hands of Terrace Marshall for a touchdown as he took a hard hit from behind.

“My knee just jammed into the turf,” Brennan recalls in an exclusive 225 interview. “My lower half was going one way, and my upper half was going the other way. And I just felt everything kind of rip.”

Working through the pain, Brennan still somehow managed to finish the game and even set career highs in completions (29), yards (430) and passing touchdowns (four) in a brutal 45-41 defeat. His performance was overshadowed by the Tigers’ second loss in their opening three games of the year, but a closer look at his early-season numbers reveals some impressive findings.

Through those first three contests, Brennan had compiled 1,112 yards and 11 touchdowns. Had he kept that pace for the rest of the year, he would have led the entire country with 370.7 yards per game and been third in the nation in both total yards (3,707) and passing touchdowns (36).

To be fair, that is a tough assumption to make. LSU had faced three of the weakest opponents on the schedule with four ranked rivals on the horizon, but it still speaks volumes to Brennan’s development over the past four-plus years.

And if the new-look offense led by first-year coordinator Jake Peetz could capitalize on the senior signal-caller’s strengths, the Tigers may be in for a treat reminiscent of 2019’s historic numbers upon his return. 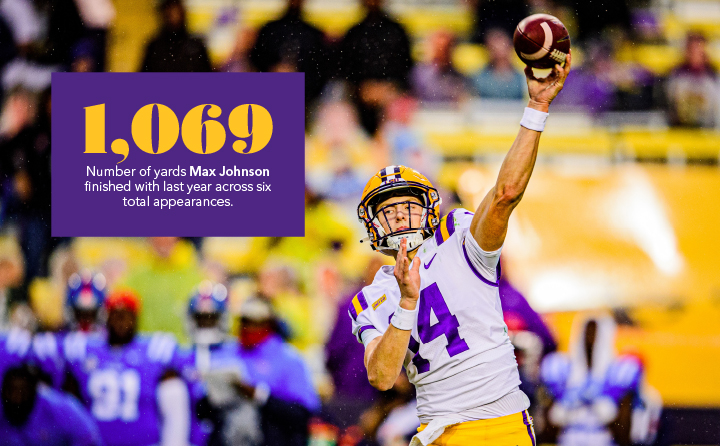 “It’s super nice that Coach Peetz came from Carolina with Joe Brady, so at least they had a year or so together to coach with each other,” Brennan says. “Coach Peetz wants to come in and pretty much try and make it as similar to 2019 as possible, while also bringing in some new additions from his own knowledge. Our main mission is going to be to get the ball out of our hands and into our playmakers’ hands, get them in space and let them make plays. That’s something we’ve done a really good job of the past two or three years.”

It’s also an area that Johnson excelled in when he was called into action following Brennan’s injury.

The true freshman got his first minutes in Week 4 against South Carolina but didn’t throw his first pass until the following week’s blowout loss to Auburn. Johnson played a backup role to fellow freshman T.J. Finley—who has since transferred to Auburn—for five straight weeks before earning his first start on the road at No. 6 Florida.

“I really wasn’t nervous at all,” Johnson tells 225. “I felt like I was pretty prepared. Coach O had a speech with us the night before the game … and it kind of just inspired all of us to just go out there and just ball and be ourselves. I feel like we all believed in each other, and we came out with the win.”

The 37-34 victory was the marquee win of LSU’s season. The headlines were stolen, of course, by Kole Taylor’s cleat, launched downfield by a Florida defender and resulting in a 15-yard penalty. It kept LSU’s final drive alive, which was capped off with Cade York’s 57-yard game-winning field goal.

But Johnson’s performance still turned a lot of heads.

He wound up finishing 21-of-36 for 239 yards with three touchdowns and no interceptions, tacking on 52 critical rush yards. It was a performance akin to that of his father, Brad, who spent 15 years in the NFL as a relative underdog before leading the Tampa Bay Buccaneers to their first-ever championship in Super Bowl XXXVII.

The younger Johnson, who started the season as the third-string quarterback, finished the year with 1,069 yards with eight touchdowns and just one interception in six total appearances.

So it’s easy to see why there was optimism on each side of the quarterback battle. Both guys have shown flashes of their skillset, and Ed Orgeron made it clear this summer he planned to give all parties a fair shot to earn the starting job.

“It’s been really good,” Johnson says, when asked about learning under Brennan last season. “Of course, we’re competing, but we’re friends, in and out of football. It’s been good to compete and learn from each other and just get better every day.”

Brennan says he took pride in becoming a coach on the field last year while he was injured, helping Finley and Johnson get up to speed each week in practice and talking them through mid-game scenarios on Saturdays.

But when he’s back to full strength, Brennan will ready for yet another competition for the starting job.

“(Quarterback competition) is nothing new for me,” he says. “I did it last year competing with the same guys, so I know I’m super capable of doing it again. Max and I have a really good relationship. It’s obvious that we all know that we’re in a competition … but I think that it’s good, because we understand that we’re also helping each other out. When we’re on the field, we’re competing, and we’re having a good time. We’re making it fun and making it worthwhile. But at the same time, we’re understanding that we are in a competition, and somebody is going to get the start.”

That job will be Johnson’s for the time being. But if we’ve learned anything from Brennan’s journey, it’s that we shouldn’t rule him out just yet.

This article was originally published Aug. 1 in the Tiger Pride 2021 issue of 225 magazine. It has been updated to reflect Myles Brennan’s recent injury.