Baton Rouge is a unique place for a large number of reasons, and the local sports scene is definitely one of them. Even if a player or coach doesn’t have some significant personal ties to the city, we will rally behind anyone who can build athletic achievement—and hype us all up.

Simply put, if you embrace Baton Rouge, it’ll embrace you right back.

From Tigers and Jags to various high schools across the area, there are dozens of stories each athletic season that bring buzz and local, state and national attention.

Since 225’s birth in 2005, we’ve been lucky enough to be a part of conference championships, national championships and even world records. Here are 15 of the biggest storylines in sports that we haven’t—and likely won’t—forget from 2005 to today.

LSU basketball makes a run to the Final Four

Led by a host of local talents, the 2006 LSU basketball team took the nation by storm with its impressive showing in the NCAA Basketball Tournament. Baton Rouge natives like Glen “Big Baby” Davis, Garrett Temple and Tasmin Mitchell became household names across the country after taking down top-seeded Duke and No. 2 seed Texas in back-to-back matchups. The marquee wins earned the Tigers a trip to their first Final Four in 20 years.

While it may not have been quite as historic as the season LSU would put together in 2019, the Tigers’ 2007 run was an unforgettable ride capped off with the national championship trophy. LSU lost two games that regular season, both of which came in triple overtime to other Southeastern Conference rivals. Some major upsets across the national landscape gave the Tigers another opportunity at the national title, and they took full advantage by beating Ohio State 38-24 (also in the New Orleans Superdome).

LSU returns to the top of the college baseball world

The 10-year stretch of success LSU baseball boasted throughout the ’90s will likely never be repeated. The program won five national titles in 10 years, setting a new standard for college baseball. It took nine years for the Tigers to get back to the pinnacle of the sport—which felt like a long time by LSU standards—but beating Texas to reclaim the throne was just as rewarding. The squad was chock-full of memorable names and future pros, from Mikie Mahtook and D.J. LeMahieu to pitchers Louis Coleman and Anthony Ranaudo.

It’s not often that a postseason loss steals national headlines, but in the case of Southern’s first-round matchup with Gonzaga in the 2013 NCAA Tournament, college basketball history was nearly made. The Jaguars entered the tournament as a No. 16 seed, facing off against the top-seeded Bulldogs. At that point, a 16-seed had never beaten a No. 1 seed in tournament history, and Southern had the game tied with less than 4 minutes to play. The Jaguars ultimately lost 64-58, but the 6-point loss marked the closest by a 16-seed to a 1-seed since 1996.

The first year under Southern University’s new head football coach Dawson Odoms started off with a bang. Despite kicking off the season with a pair of tough losses, the Jaguars went on to win seven of its final 10 games to take home the SWAC Championship for the first time in a decade. The conference title game was a double overtime thriller against Jackson State, which had beaten Southern 19-14 earlier in the year. The Jaguars got the best of the rematch.

I would never have thought I’d be the athletic director, because I was passionate about basketball. … God brought me to Southern University through basketball, but it was destiny (becoming AD).

Starting in 2014, Southern University was forced to halt its athletics due to poor record-keeping within the university. There was a massive uphill battle to climb in order for the school to get back in good academic standing with the NCAA. Then-head basketball coach Roman Banks gave up his whistle and whiteboard in order to take over as athletic director and work to bring the university back up to par. It was a remarkable transformation for a university that was in such disarray, seemingly without an end in sight. Southern will remain on probation until November 2021, so this is a story to continue monitoring.

Baton Rouge loves its sports. So naturally it was exciting news when LSU announced the introduction of its sand volleyball team in 2014. The Tigers have gone from a 6-10 record in the first season to a 31-8 mark last year, including three straight NCAA Championship Tournament appearances.

It’s not breaking any news to say high school football is just different in Louisiana. So there were some serious bragging rights building in 2015, when Lutcher High, Zachary High, Catholic High, Parkview Baptist and Southern Lab—all 225-area schools—took home their respective state championships. It was the first time since 1966 that three or more Capital Region schools won state titles in the same year.

The LSU men’s golf team’s national championship in 2015 was an impressive feat. It was the fifth national title in the program’s history, but the first since 1955. The Tigers also tied a team record with five wins on the season, matching the single-season mark previously set in 1959-60.

Les Miles out. Coach O in.

Discussing Les Miles’ future at LSU had become a regular topic of conversation in Baton Rouge around 2012 or 2013, and it was often pretty polarizing. It was hard to hate on the quirky “Mad Hatter” who had brought LSU a national title. But it was equally tough to justify some of the coaching decisions that were taking place on the field. Two losses in the first four games of the 2016 season meant the final straw for Miles, and in stepped Louisiana native, Ed Orgeron. Three full seasons into Coach O’s tenure: so far, so good.

Will Wade takes over the LSU basketball program

We are going to build something that the whole state of Louisiana can be proud of. ... We are going to do that on a culture based on acting the right way.

After some of the worst years in LSU basketball’s history, the Tigers brought in a young, bright mind to run its program. Will Wade came from a promising track record at VCU and has already shown signs of more growth in Baton Rouge. LSU went 18-15 in Wade’s first year but improved to an SEC-best 25-5 in the next. Wade’s third season couldn’t be played out because of COVID-19, but the future sure looks bright in Baton Rouge—assuming none of these rumored NCAA investigations pan out poorly.

Mondo Duplantis vaults his way into the record books

Mondo Duplantis may have only spent one season on LSU’s campus, but the excitement he drew will last a lifetime. The pole vaulter was the brother of former LSU baseball standout Antoine Duplantis and ultimately left Baton Rouge after his freshman season to pursue a professional career. He finished his collegiate career with countless records and titles to his name, including NCAA indoor champion, SEC indoor and outdoor champion, collegiate indoor and outdoor record holder and LSU indoor and outdoor record holder, among many, many others. Duplantis has since broken the world record in the pole vault, with a height of 6.18 meters.

Nothing may ever top LSU’s historic 2019 national championship

It may have been the fourth national title in LSU’s history, but this is one that’s going to hold a special place in the hearts of Tiger fans forever. Led by Heisman Trophy winner Joe Burrow (or “Burreaux,” as he affectionately adopted), Biletnikoff winner Ja’Marr Chase and Baton Rouge native Clyde Edwards-Helaire, LSU strung together a perfect 15-0 season, breaking record after record along the way. Lifting the trophy from the friendly confines of the Mercedes-Benz Superdome was another cherry on top.

August 2019: “You can tell this year is really different.” —Joe Burrow, ahead of his Heisman-, SEC- and national-championship winning season 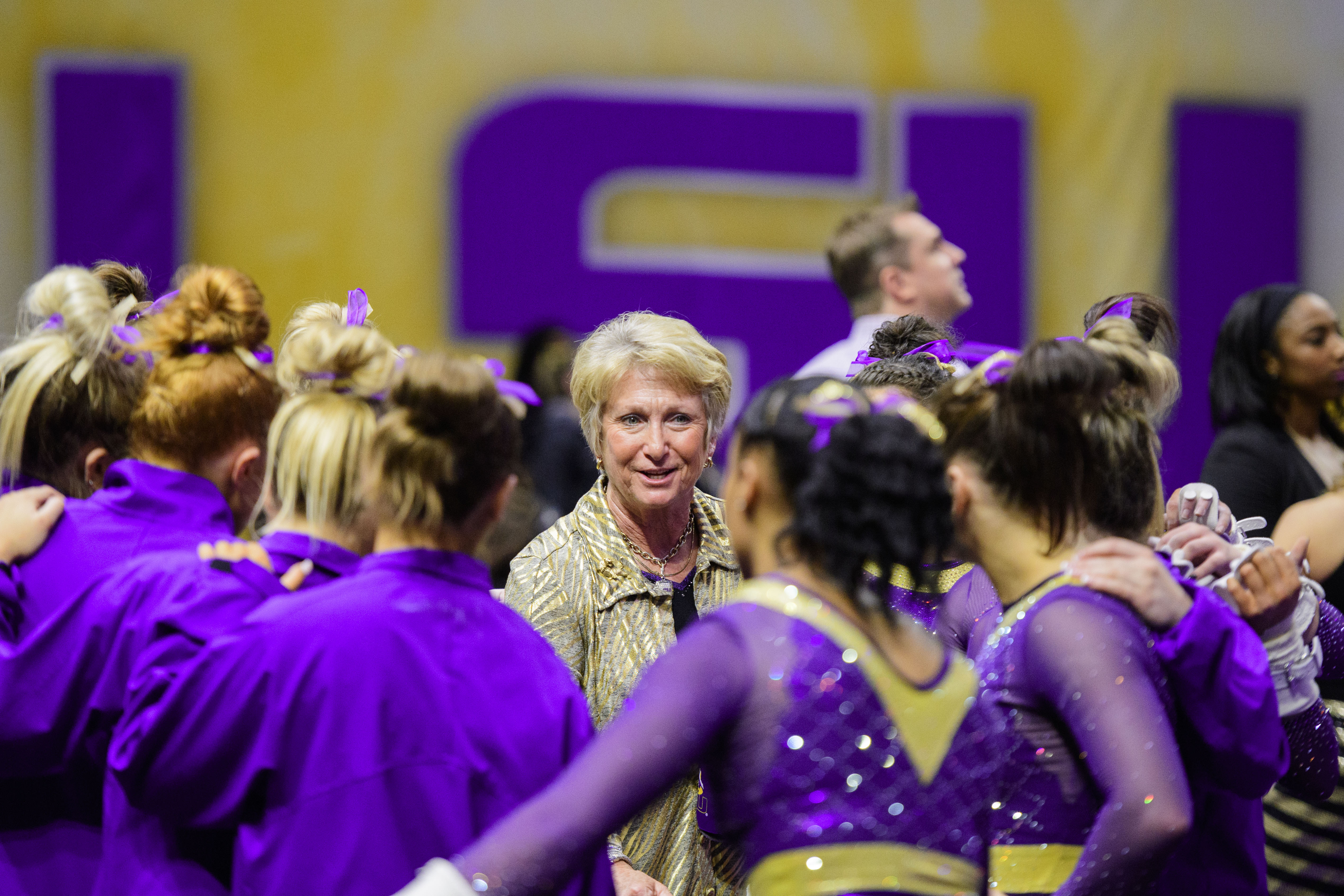 D-D Breaux has long been an icon not only on LSU’s campus, but nationwide on the gymnastics scene. She retired this year as the longest-tenured coach of any sport in SEC history and her track record speaks for itself. Breaux has helped elevate LSU to a national powerhouse, racking up more than 800 wins and 31 top-10 finishes in her career, including three second-place finishes. She won’t be running the gymnastics program anymore, but she’ll still be rocking the purple and gold as an LSU ambassador for the athletics department.

Aggust 2015: “I’ve spent my entire career selling the community on gymnastics. You don’t have to understand gymnastics to enjoy the athleticism and the aesthetics of the sport. But once you come, you become part of that excitement.” —D-D Breaux