Last year was going to be the year. Players and coaches alike could just feel it.

The LSU beach volleyball program had already seen a rapid rise through the ranks in its young, seven-year history, though the Tigers hadn’t yet gotten over the hump to snag some postseason silverware.

LSU opened the season by winning the Duke Kahanamoku Beach Classic in Hawaii—a tournament that saw the Tigers take down No. 19 Stanford,
No. 5 Hawaii and No. 1 UCLA, marking the program’s first-ever win over the two-time national champion Bruins.

“It really did feel like a fairy tale season, the way it was going,” says senior Toni Rodriguez, “like things were going to go in our favor. We were going to put in the work and the effort and the time to win the national championship. And I think we were on a good path to do that.”

The tournament title set the tone for the season, and LSU would rattle off wins in its next nine matches, including another victory against top-ranked UCLA.

The Tigers were rolling. The team had worked its way to the top spot in the national polls.

Then, like most of 2020, the wrath of COVID-19 ended the promising season just 14 matches into the year.

It was a jarring halt to a season many within the program anticipated being a historic one. 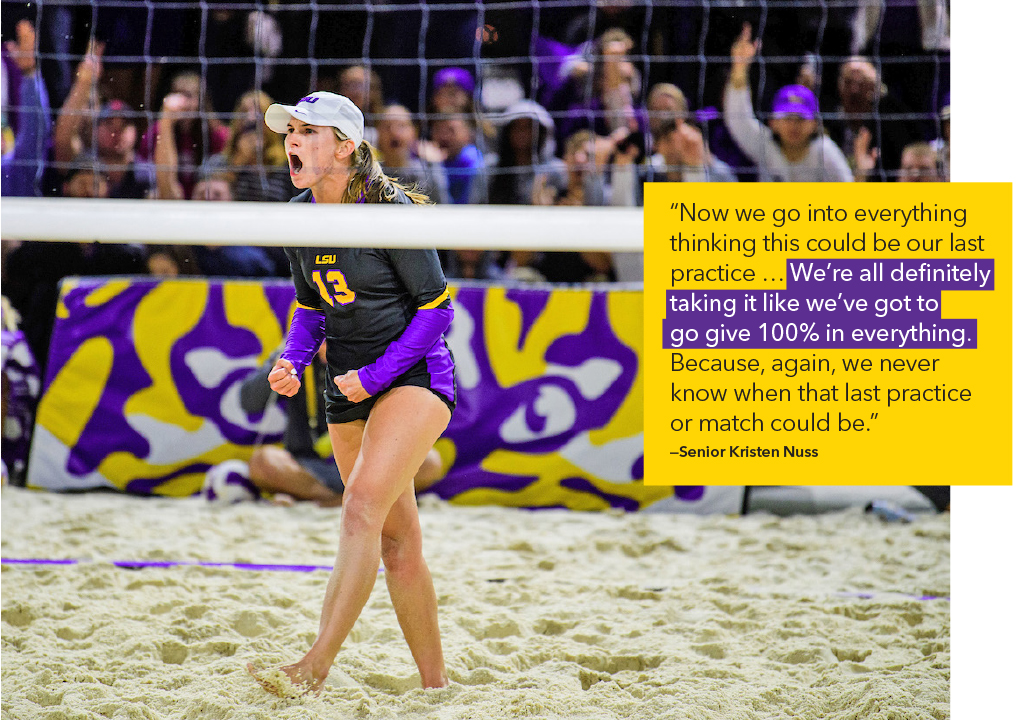 Since its inception in 2014, the LSU beach volleyball program had continually built upon its prior successes, increasing its win total and national ranking every year. The Tigers finished the 2019 campaign with a 31-8 record and ranked No. 3 in the country.

Last year was supposed to be its next step. And while that opportunity may have been taken away from the team, the Tigers have transformed the heartache into an even more focused and ambitious 2021 season.

“That is something that we’ve definitely taken from last year,” Nuss says. “Now, we go into everything (thinking) this could be our last practice, or this could be our last (weight) lift. We don’t know when the end is going to come. We’re all definitely taking it like we’ve got to go give 100% in everything. Because, again, we never know when that last practice or (match) could be.”

The good news for LSU—and in particular for seniors like Rodriguez and Nuss—is that all collegiate athletes were given an extra year of eligibility due to the pandemic. 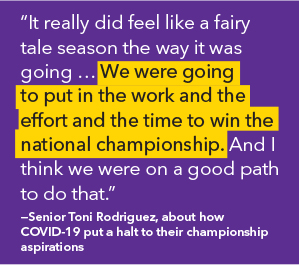 So the Tigers were able to bring back all the pieces from that hopeful season, giving head coach Russell Brock even more reason for optimism as he enters his fifth season in charge of the program.

Brock first arrived in Baton Rouge in 2014 for the launch of the program, after spending eight seasons coaching with Rice’s indoor team. He worked as an assistant coach for the first three years under Fran Flory, who was pulling double duty as LSU’s indoor and beach volleyball coach, splitting her time between the sand and the court.

She wasn’t the only one, either. When the program first launched, the majority of the roster was filled out with mostly indoor players, as well as a few students who came to an open tryout for the team.

“We were out training at Mango’s (volleyball complex) in January when it was freezing cold, and trying to teach them to play the game of beach volleyball,” Brock says. “They really had no experience, no training and obviously it was a very tiny group. We would sit and (ask) how can we start to teach these players some of the skills that will give them an opportunity to maybe have some success in a month and a half, playing against teams that had full rosters and had been training and playing for two or three years? That was probably the biggest epiphany that we walked into. This is going to be good. But right now, how do we shorten this process to get us in a position where we can play the game a little bit?”

Brock has since steadily solidified the team, putting together a full roster of top-tier talents that currently hail from 10 different states.

A handful of them are the typical beachy places you’d imagine would produce high-level sand volleyball players, like Florida or California, but an even bigger chunk come from land-locked states.

South Dakota, Iowa, Kansas, Ohio, Arizona, Texas, and, of course, Louisiana are all represented on the Tigers’ roster—speaking to the recruiting power the Tigers have built up already.

“Our job is to find the best kids in the country who can play. They’re super athletic and can get after it, and we don’t really care where they’re from,” Brock says. “We just want to try and get them down here to Louisiana and help them become great beach volleyball players. We’ve always had to go and find either a diamond in the rough or a player from a non-traditional place who had great ability, but would be open to going somewhere other than California or Florida. That’s always been a part of our recruiting process. We’re looking for the best available, and the best available may not be in those (traditional) places; it could be coming from anywhere around the country. So it makes it fun.”

Along with the slew of successes on the sand, one of LSU’s biggest recruiting tools has been the new state-of-the-art Beach Volleyball Complex that opened on campus in 2019. 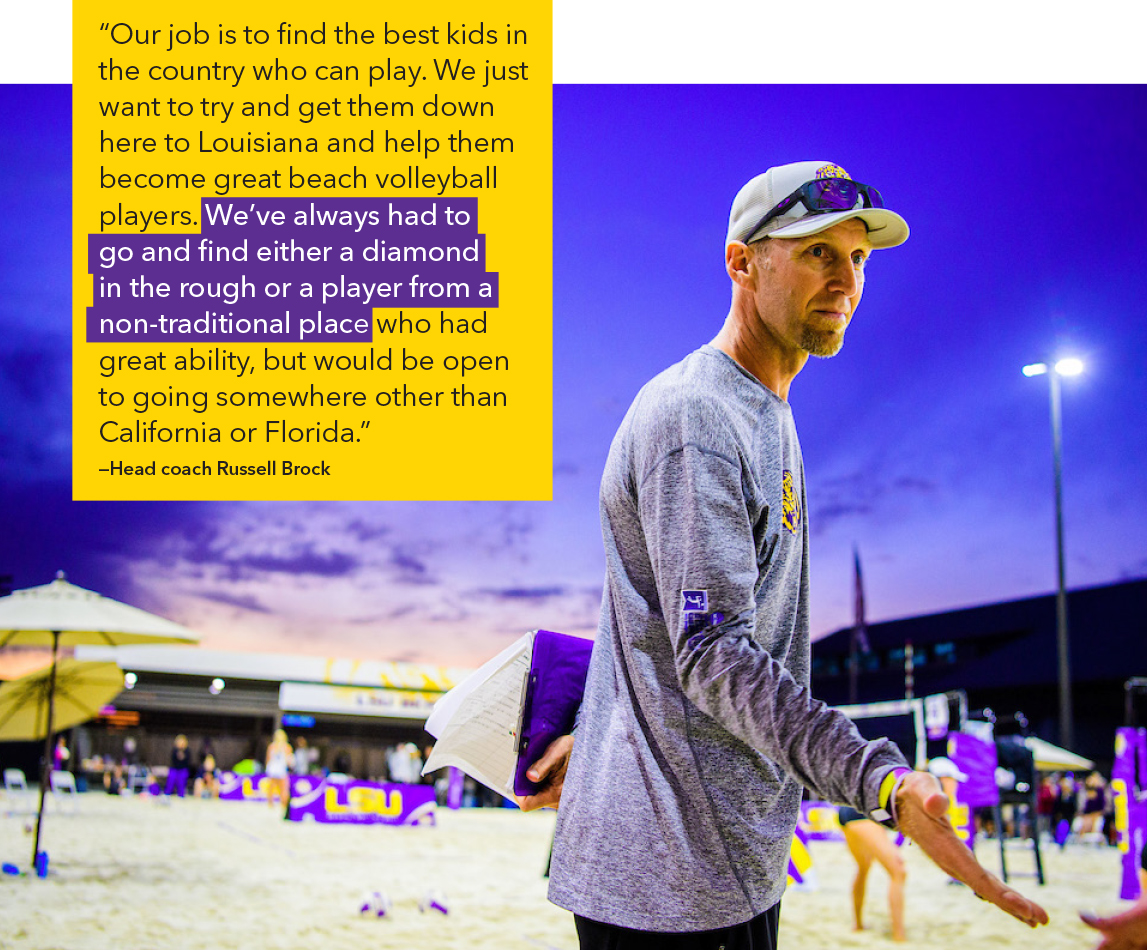 The university revitalized the old tennis stadium near the PMAC and West Campus Apartments to build one of the country’s premier volleyball venues.

The facility has a customized locker room, a team lounge and a training area, as well as six outdoor courts holding 24-inch-deep sand with an underground irrigation and wetting system.

“There’s no doubt that one of the reasons why we’ve been able to get to where we are right now is because of that facility,” Brock says. “Mango’s was great for us to be able to have a place but, in the big picture, to have that facility, to have a place to call home, to (have a place) for our fans to come and support us and for the campus to even really know, honestly, that we exist, it was great. And then to have something that’s better than anything else in the country is more humbling than anything. Our mentality every day is: We’ve got to prove that it was worth it to spend the money and to spend the time and the energy to build this facility.”

Looking at where the program sits now—ranked No. 3 in the nation and touting an 11-2 record as of press time—is a testament to the work Brock, his staff and the players have put in throughout the past seven seasons.

And if their success so far is any indication, the future sure does look bright on the beaches of Baton Rouge.

Baton Rouge's food truck scene has been quietly growing during the pandemic; here are 7 new arrivals

A local photographer's secrets to nailing your family photo shoot