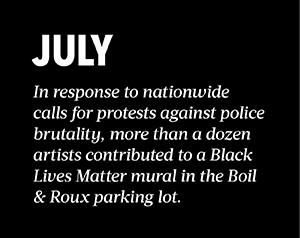 The mural in the Boil & Roux parking lot is full of vivid color, showcasing the talents of Louisiana artists in one eternal message: Black Lives Matter.

Local artist Kristen Downing curated the mural’s creation during the July 4th weekend, and organized the more than a dozen artists who contributed their own letter designs. Each letter has its own artistic flair in hues of blue, red and many more colors.

After several Black Lives Matter murals were painted in cities across the country in response to the killings of George Floyd, Breonna Taylor and Ahmaud Arbery earlier this year, Downing says she received many requests to put a Black Lives Matter mural up in Baton Rouge. She says she reached out to people, including city officials, to make this a downtown community project but felt like she was given the runaround.

“It made sense to put this mural somewhere downtown, just like other cities are putting it on major streets,” she says. “I didn’t get that approval.”

She continues, “Adrian [Hammond] from Boil & Roux heard that I was trying to do the Black Lives Matter mural. He actually funded the whole project with getting our supplies and feeding the artists.”

Downing wants artists to use their creativity to stand up for what they believe in. “We can be powerful and send out a message through art,” she says.

She designed three letters for the mural, the “B,” the “S” and the “R.” She worked with artists like Marc Verret, Lamont Coleman and Cierra English.

“I’m a portrait artist; I tell our stories, African American stories. I’m the voice for the voiceless.”

Downing’s own design for the “S” includes the words “stop killing us” outlined in white and set against a black background. Her “B” design features the faces of Black people killed by police.

The project has been a way to give back to the artist community, Downing says, particularly for artists who haven’t previously had a platform to create such large pieces. Many of the artists she spoke with said that this was their first major project. And, she says, after the project, a lot of them got other mural commissions.

It was meaningful to her that everyone who worked on the mural project is from, based in or associated with Louisiana, and many were local to Baton Rouge.

“If I have a door open up for me, it’s only right that I open up the door for other creators, especially the local talent,” she says. “The people with a platform have to provide that space.”

“People should speak,” she continues. “Use your voice, let your voice be heard. Never stay silent. And no matter if you’re on the frontline of a protest or sitting behind, we all have a part to do to make a change.”