Here at 225, we spend a lot of time on Google Maps. Whether it’s fact-checking the address of a new restaurant, getting directions to an upcoming development we got a news tip about, or scouting Street View for a photo-worthy location for a fashion shoot, we’ve become geographic mavericks.

And just like scrolling through an Instagram feed might lead you down an hour-long rabbit hole of images, zooming around Google Maps can send you on a virtual road trip around the city.

Over time, we’ve come across peculiar things as seen from above. And as journalists do, we start asking questions.

Here are a few interesting sights and sites we’ve been investigating. Do you have a spot around town you’ve always wondered about? Send us an email at [email protected], and we’ll look into it!

Prime real estate on the lake

With all the attention to revitalizing the LSU and City Park lakes—and the enviable rows of expensive lake-facing homes—it’s crazy to think there’d be any space left untouched. But for years there’s been a small peninsula of land off limits to development. Overgrown with trees and invasive plant species, a rundown sign on East Lakeshore Drive marks it as the LSU Bird Refuge. There’s scant information available online about the site, but LSU Lab School environmental science instructor Steven Babcock shed some light on it. For years, he’s brought students out to the refuge, paddling across the lake on kayaks so they can study and document its plant species and water quality. Recently, they’ve upgraded to drone flyovers to count and spot its live oaks and invasive plant species like the Chinese Tallow, whose leaves turn bright red in the fall.

The refuge provides nesting grounds for migratory birds such as egrets, herons, pelicans and ibis. Early renderings of the revitalization of the lakes show the refuge mostly undisturbed by the planned dredging, new pedestrian paths and boardwalks—which indicate this pristine spot will likely stay in its natural state for years to come.

Bar on the bayou

It’s a little jarring to see one of those cocktail icons—indicating a bar or nightclub—smack in the middle of a swamp with no visible roads nearby. While not necessarily a swim-up bar, the Prop Stop on the Tickfaw River is only accessible by water. A long dock stretches along the south bank of the river for boaters to tie off and stop in for a Swamp Burger, the “Worm Bucket” cocktail, live music, and what its website refers to as a back deck “notorious for the ladies getting wild and crazy.” So if you want to party like MTV’s Spring Break circa 1998 and have your own mode of nautical transportation, you’ll find the Prop Stop not far from where the Tickfaw spills into Lake Maurepas. 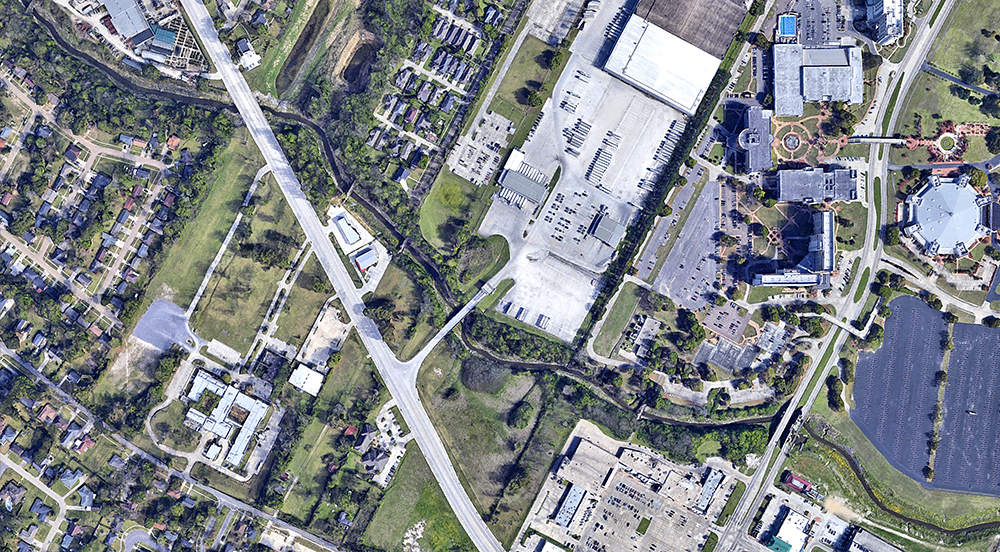 There’s a stretch of Perkins Road between Essen Lane and Bluebonnet Boulevard that criss-crosses Dawson’s Creek. At four or five spots along the creek are narrow bridges obscured by trees and overgrowth that appear just wide enough to fit a car across. One is hidden behind Bluebonnet Village Shopping Center; two others are behind the strip center next to LA Boilers Seafood. Were they meant as pedestrian bridges for the neighborhoods across the creek?

Melissa Glasscock at the city Department of Transportation and Drainage looked into this for us and suspects they date back to the 1950s and ’60s, when much of the land was utilized as rural farms and cattle pastures. Drainage and construction of new roads may have cut off landowners from portions of their property, so the city built these small bridges and gave them over to the property owners to privately maintain. They aren’t meant for public access, Glasscock notes.

Off Scenic Highway near the city landfill sits what at first looks like a standard race track. Closer inspection shows a grid of streets, stoplights and even a cul-de-sac in the center of the track. Yet there are no homes or businesses around—almost like a residential development that never took off.

It’s actually part of a facility run by the Louisiana State Police known as the Joint Emergency Services Training Center. The complex provides law enforcement and other agencies with emergency and first-response training so they can expertly navigate the twists and turns of true-to-life neighborhood streets.

If you’ve ever wondered how police officers prepare for a high-speed chase, this is likely where they got those expert skills. jestc.org

What was once 1,800 acres of farmland and cattle pastures has slowly transformed over the years as Baton Rouge grew around it. Now relegated to 250 acres and nestled between shopping centers and apartment complexes, the home of Live Oak Arabians still feels sprawling if you drive past its dark wood fence and manicured oak trees along Jefferson Highway. The property has been in the same family for generations, but it was current owner Phil Witter who started breeding championship show horses and cattle here in 1972. The ranch has raised more than a thousand winning purebred Arabians in national and international competitions.

In recent years, Witter has renovated the historic main house, built a small chapel and added other amenities to host weddings and events and make the pastoral setting more accessible to the public. “We have something so out of the ordinary here,” he told inRegister in November 2020. “A farm inside the city—that’s special, and we want to share it.” liveoakarabians.com

The side hustle: Baton Rouge has its own brand of holiday fare

There is no 'silver bullet' solution for flood problems, experts at Smart Growth Summit say