While the COVID-19 pandemic forced us to disconnect socially, it also created more opportunities for people to connect online.

The situation presented a unique challenge for arts organizations. They tend to rely on in-person experiences where audiences can see, hear and interact with art and performances.

That’s hard to replicate online. But it should come as no surprise that creative people will still find creative solutions when performances and exhibitions get canceled.

“Those of us who work in the arts talk about the power of art and creativity to make people’s lives better, and here we are with a situation where that’s magnified greatly,” says Jason Andreasen, executive director of Baton Rouge Gallery.

Read on for examples of how these organizations have used an online art showcase and other ways to connect with the community virtually.

When Baton Rouge Gallery temporarily closed its space at BREC’s City Park, the staff decided to launch an online exhibition not just of work from its 60 professional artist members—but from budding artists across the city.

“We didn’t feel good about just throwing up our hands and saying, ‘We’re closed.’ We wanted to still be of service to the community,” says Executive Director Jason Andreasen. “A lot of people are at home with all of this unplanned downtime. And they might still want to create something, and they still want to share it.”

“The Flat Curve Gallery” is open to submissions from anyone in the community—adult or child. They can upload images of their work for free as long as it was created after March 13.

And since its launch, the virtual gallery has received nearly 350 submissions. Sketches, black and white photos, watercolors, digital art, chalk art, doodles and arts and crafts have all graced Baton Rouge Gallery’s website and social media. That includes 2-year-old aspiring artists side by side with professionals whose work has appeared in major museums.

Since that overwhelming response, the gallery started a twice-a-week Facebook Live series that highlights and interviews participating artists.

The gallery had to prematurely close its March exhibition and cancel its annual juried exhibition of high school artists, which usually falls in April. But Andreasen says the Flat Curve Gallery has been a testament to how the community appreciates local arts groups.

“We’re encouraging people to continue to support those arts organizations in town,” he says, “and remember that when things got dark, you were able to turn to the arts. I hope that people will remember that when we get through this.” batonrougegallery.org

The orchestra’s springtime calendar was packed with performances as well as a farewell to its retiring longtime music director and conductor Timothy Muffitt. But with the season postponed and a stay-at-home order in place, it was impossible for musicians to perform together.

So the orchestra started sharing solo concerts on Facebook, featuring its cellists, violinists, pianists and even a percussionist on the marimba.

Executive Director Eric Marshall got in on the fun, too, showcasing his opera background as he sang a number from the musical Camelot.

“Live collaboration in symphony is really difficult to do digitally,” Marshall says. “But to have some music going on at this time is important for all of us.”

The orchestra was gearing up to announce its upcoming season and launch fundraising campaigns. But fortunately, the summer is typically when the orchestra takes a hiatus, and the staff will have a chance to regroup.

And its performers still get to flex their musical muscles from home with the video series.

“We can’t last this way forever,” Marshall says, “but we are in good shape to weather this storm.” brso.org 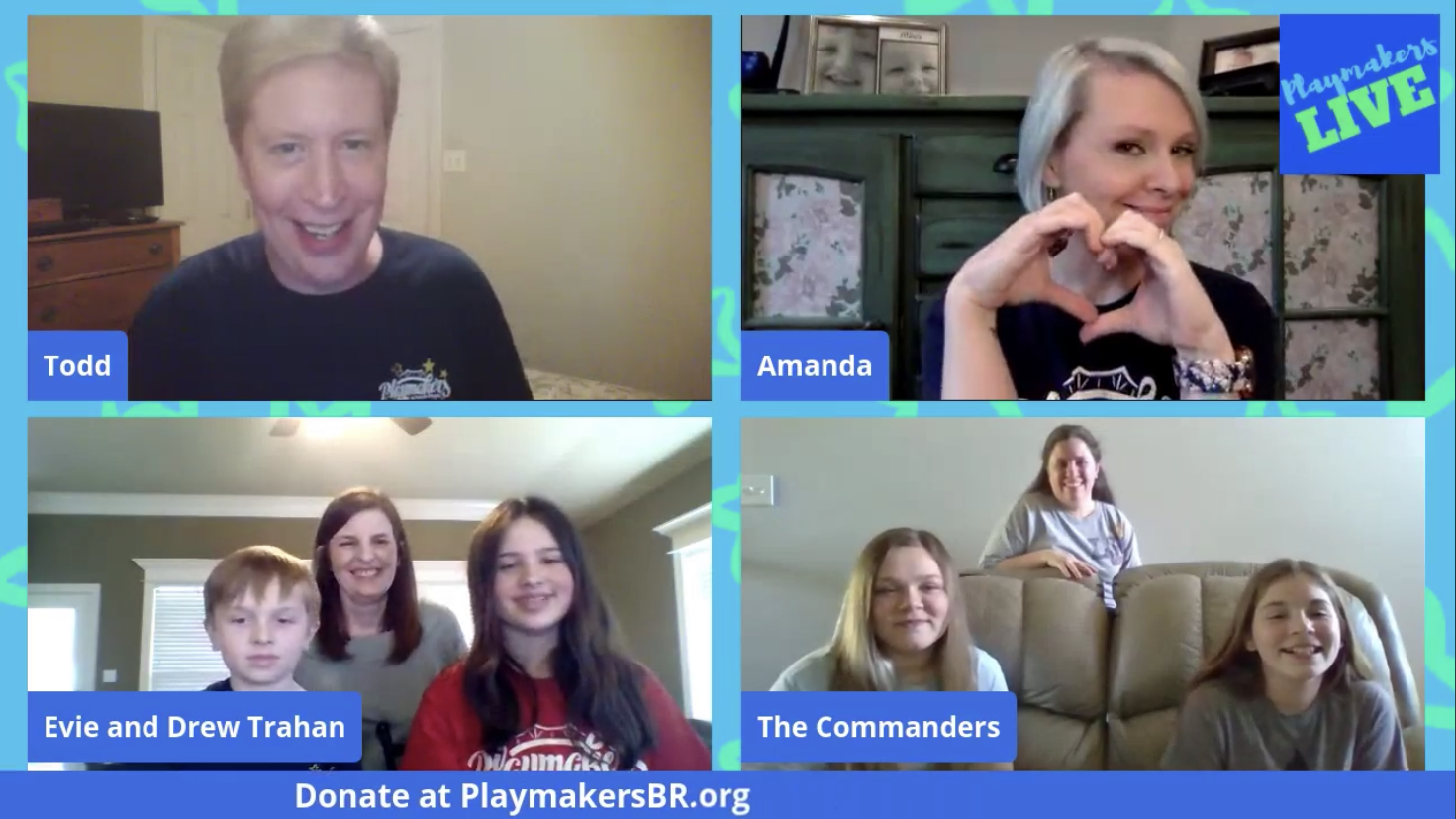 Theater is all about the excitement of a live stage show. But in response to COVID-19, Playmakers Executive Director Todd Henry started going live on Facebook from his home.

As part of the series “Playmakers Live,” Henry welcomes guests remotely for a variety show, talk show and musical theater showcase all in one.

“It’s a great way for our alumni, our kids or anyone who wants to come on and tell a story, sing a song, give acting lessons or dance lessons,” Henry says. “And even with all these productions [from other arts organizations] that had to close down, if they want to come and perform a song they didn’t get to do, they can do that, too.”

Playmakers caters to young actors and audiences, and was gearing up for its summer musical School of Rock in May. That’s been put on hold, and so has its biggest financial endeavor each year, summer acting classes.

“Everything is paused right now but not all of our bills are, and that’s the reality of it,” Henry says. “We’ve had a pretty great year so far, but that will only go so far.”

In the meantime, Henry and the Playmakers crew are keeping spirits up and kids entertained online.

“We’re trying to stay as positive we can,” Henry says. “I’ve gotten so many emails from parents saying how great it was for their kids to see us on their computer screen.” playmakers.org

Everyone loves a little competition. The longtime theater organization was inspired by March Madness to develop a bracket of its own: “Quarantunes.” Participating performers were drawn at random to compete in a head-to-head battle with a musical number of their choice on Facebook. Viewers made donations to the theater in exchange for a vote for their favorites.
See TBR’s Facebook page for the videos

The organization’s Dancers’ Workshop normally serves as a feeder school to cultivate talented ballet dancers. The workshop quickly moved training online for its students and company members, hosting free classes for them through the Zoom app. batonrougeballet.org

The improv and experimental theater organization found new ways to get the laughs going. The group hosted free virtual improv “jam sessions” on Zoom open to anyone regardless of improv background. latcocomedy.com

The downtown museum is giving children a way to express themselves creatively at home with the launch of an online museum. There, visitors can find downloadable coloring pages inspired by its exhibitions. It’s also posted virtual experiences of its popular children’s activities, such as the Traveling Trunk Show. virtual-lasm.org

Mary Ellen Slayter, CEO of the local content marketing business, is a big supporter of local music. So she and the Rep Cap team launched a weekly Facebook Live series, “Remote Talent,” with area musicians performing a virtual set. A plus for musicians: Rep Cap is paying the bands their regular performance fee. Find Rep Cap on Facebook

The Arts Council kept arts education going by sharing resources on Facebook. It also partnered with the Louisiana Division of the Arts to survey local artists about how they’ve been impacted. On Instagram, the Arts Council encouraged people to make a 15- to 30-second video washing their hands along to their favorite song. artsbr.org

Editor’s note: These are highlights and not meant to be a comprehensive list.

This article was originally published in the May 2020 issue of 225 Magazine.