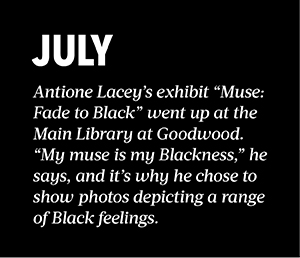 There are some things Black men just can’t talk about. And that’s what Antione Lacey wants to amplify in his work.

“We are told from a young age to never show emotions. To man up,” Lacey says. “But what exactly does ‘man up’ really mean? It’s just hard to be vulnerable in some cases without being seen as weak.”

As a photographer, poet and designer, Lacey has often struggled with feelings that his work wasn’t good enough for others to see. But he recently made himself vulnerable in the biggest way possible: bravely showcasing his pieces in a July exhibit at the Main Library at Goodwood.

Just a few steps from the library’s entrance, patrons couldn’t miss his “Muse: Fade to Black,” display. Black-and-white framed photos and printed poems stood out against a gray wall. The stories were divided into three sections, each depicting a different emotion.

Black joy, which Lacey says is Blackness in its truest form, was represented in moments like artists breakdancing on Bourbon Street.

Black pain was depicted in visuals from a local protest following George Floyd’s death. The heartache seemed to reverberate from the photo, a pain that Lacey says is universal in the Black community and is felt mentally, physically, spiritually and emotionally.

Black love is the bridge between it all. “It keeps us whole in between the joy and pain,” he says. “It is pure.”

Lacey’s favorite image from this section is a maternity photo representing new life. The couple’s hands rest on the mother’s pregnant belly, forming the shape of an ankh, an ancient Egyptian symbol that translates to mean “life.”

Lacey prepared poems to go with each section. He chose to print his photos in black and white, because he says the tones complement the soulful moments he captures.

But there is one image in color. It’s a depiction of a Black man’s bloodied arm on the ground. Scrawled across his skin are the words “not another hastag.” Hashtag is intentionally missing the “h,” to represent those killed by police. Hashtags are another thing that became part of Black culture without anyone ever asking for it, he says.

Lacey began working with the library on the exhibit at the beginning of 2020, but it was put on hold during the stay-at-home order. After the library reopened—and George Floyd was killed—he reexamined which images he wanted to show and what he wanted the exhibit to convey.

All the positive feedback he’s gotten from the exhibit has done wonders for Lacey’s confidence. He’s grateful for all the people who have bought prints. He smiles when he thinks of those who have emailed him to say how nice it was to see a fresh face at the library, or to thank him for bringing everyday experiences to light that aren’t usually discussed.

“It took me a while to overcome my artist’s anxiety, to stop viewing myself as not being great,” he says. “But I am great.” visionaryblessings.com