By the time LSU baseball’s season was slated to begin, it would have been 11 months and nine days (346 days to be exact) since the Tigers last took the field at Alex Box Stadium.

So what’s one more day going to hurt?

LSU and its fans have had Friday, Feb. 19, circled on their calendars for the past month in anticipation of opening day at the Box. But—just as it did for the majority of last year—COVID-19 had other plans.

Due to “COVID issues” within its team, Notre Dame will no longer make the trip down to Baton Rouge this weekend to participate in the round-robin style series. This late cancellation caused a shift in the weekend’s original schedule and now forces the Tigers to wait one more sunrise before throwing out the season’s first pitch.

LSU now kicks off its season Saturday at 1 p.m. against Air Force. The Tigers will face the Falcons again Sunday at noon before wrapping up the weekend series Monday night against Louisiana Tech, with first pitch set for 6:30 p.m.

“I’m going to be anxious until we strap on the uniform and get to play a game against somebody,” says LSU coach Paul Mainieri. “It’s been a chaotic week dealing with all these things. Fortunately we didn’t just have one team on our schedule this weekend.”

It’s an exciting group of players that will be donning the purple and gold this season, headlined by a few standard stars that are already in discussion for postseason national awards. Whether you’re one of the lucky few able to make it into Alex Box or watching while bundled up in the warm confines of your living room (all of LSU’s games can be streamed on ESPN+) , here are a few Tigers to keep your eye on this opening weekend. 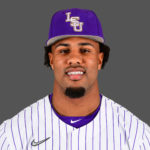 Hill is the headline name for this 2021 LSU unit. He was just recently named to the 55-player preseason watchlist for the Golden Spikes Award, given each season to the top amateur baseball player in the country. He’ll be the Tigers’ regular Friday starter for most traditional weekend series after showing glimpses of his arm talent in both 2019 and 2020. He was named a third-team All-American by Collegiate Baseball newspaper for the shortened 2020 season, allowing no runs and just one hit in 11.2 relief innings, while recording five walks, 17 strikeouts and two saves in the process. He also held opponents to a .028 (1-for-36) batting average on the year. His fastball has previously been clocked at up to 98 mph, and if he can channel that velocity again in 2021, the Tigers will have a bonafide ace on the team. 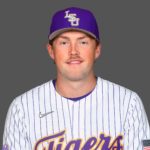 Many LSU fans probably remember Beck for the long, flowing, bright blonde hair that would bust our from under his hat when he took the mound. The senior (and his hair) have made appearances in countless numbers of pivotal situations for the Tigers throughout his college career. His locks may be gone, but Beck is not. He was granted an additional year of eligibility for 2021 after COVID-19 ended what would have been his final year on campus after just 17 games. It’s still yet to be seen exactly what kind of role the right-handed pitcher will play this year, but Beck brings value beyond the baseball diamond. He earned the prestigious No. 8 jersey for the Tigers, given each season to the upperclassman who “exemplifies the spirit of LSU Baseball through his leadership and dedication to the program.” If the Tigers hope to make it back to Omaha for the College World Series, they’ll need the leadership of Beck and the other veterans to help guide them there. 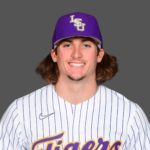 On the other end of the eligibility spectrum from Beck sits a highly-touted freshman class headlined by Crews. The Longwood, Florida, native was rated as the No. 13 prospect in the country, according to Perfect Game, which makes him the highest-ranked player to attend college this season (most highly ranked prospects sign professional contracts straight out of high school). Mainieri said Crews, who can slot in at a number of positions, will get the start in right field for LSU this weekend. Not only is the 6-foot, 200-pounder a top-tier athlete, he’s already shown off some of his bat power throughout the offseason. He had the highest exit speed (the speed of the ball after it hits the bat) of anyone on the team in multiple scrimmages in January, hitting as high as 110.5 in one of them. Be sure to keep all eyes on 3. 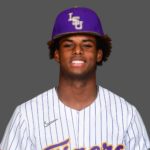 It’s always going to turn a few heads any time there’s a multiple true freshman penciled in as an opening day starter for LSU. Morgan may not have been quite as highly ranked as Crews coming out of high school, but don’t let that take away from his talent. The Brother Martin alum was regarded as one of the best hitters to come out of the New Orleans area after compiling a .488 batting average with three home runs and 27 RBIs as a junior. He had season-ending elbow surgery at the start of the 2020 season, which also knocked him down several recruiting rankings. Mainieri says Morgan, who stands at 6-foot-1, has been one of the brightest spots for LSU throughout the offseason, and he’ll get the start at first base for the Tigers this weekend.

With names like Hill, Landon Marceaux and A.J. Labas, it’s no wonder LSU’s starting rotation catches a lot of eyes and steals a lot of headlines. But taking an even deeper look at the Tigers’ pitching staff reveals multiple well-known names who will be called upon to start, extend or close ballgames throughout the season. Guys like Ma’Khail Hilliard are back, having previously been one of LSU’s most consistent starters in past years. Fellow senior Devin Fontenot, who was a third-team All-American in 2020 has taken over the important role of the team’s closer. And familiar faces like Beck, Trent Vietmeier and Aaron George have all proven their worth in the past. The Tigers also have four left-handed pitchers—up from the one they had in 2019—and are welcoming nine true freshmen into the pitching staff, giving them even more options throughout the season. If this unit can come together, LSU will have one of best pitching staffs in the country.

Sponsored: How to be part of inRegister’s Weddings issue