After witnessing the mesmerizing play of LSU’s Heisman Trophy winning quarterback Joe Burrow in 2019, Tiger fans have endured two frustrating seasons of injuries and inexperience at the game’s most important position.

Myles Brennan started off the 2020 campaign strong, throwing for over 1,100 yards and 11 touchdowns in three games, before suffering a season-ending injury. The Tigers started two true freshmen the rest of the year. 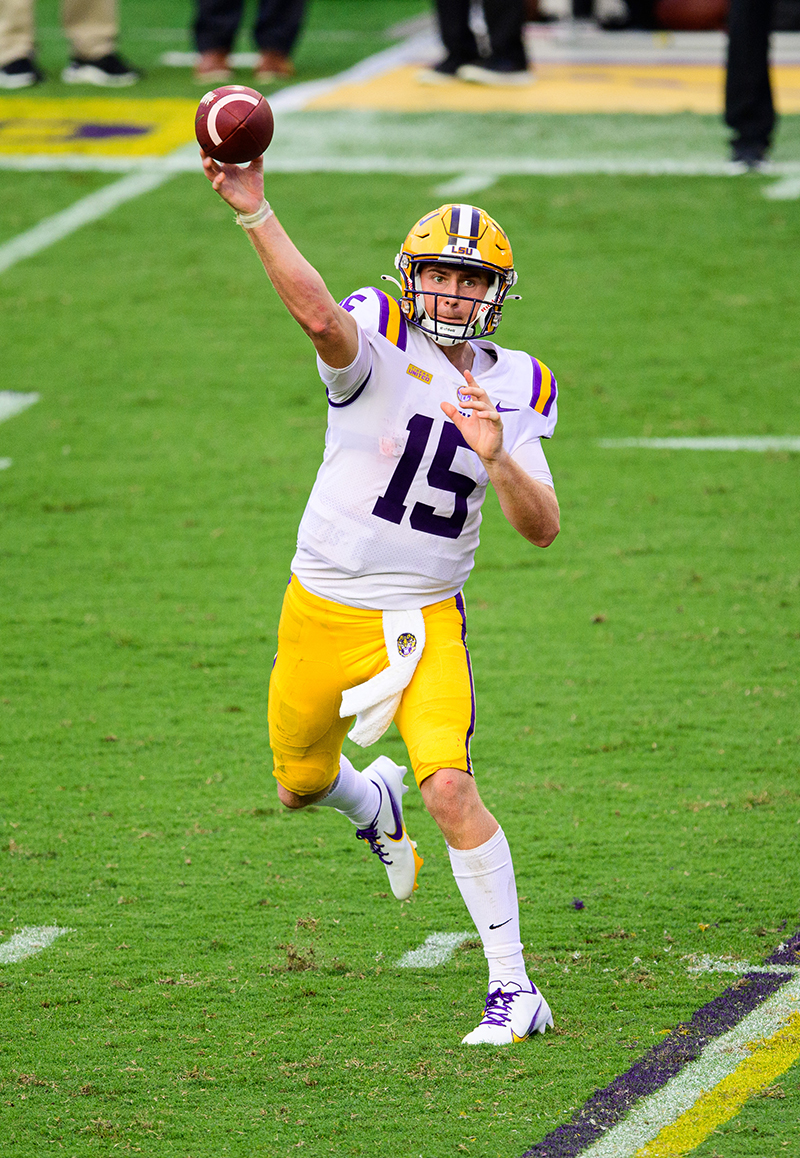 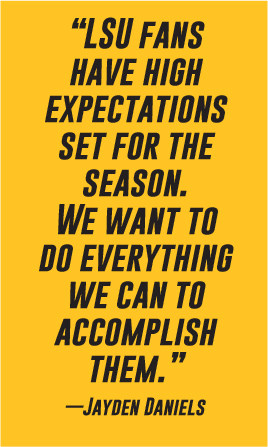 Brennan returns to LSU for his sixth year, hoping to stay healthy and win back the quarterback job he briefly held two seasons ago. This year, however, Brennan faces a much more improved and experienced quarterback room. Along with Nussmeier and top recruit Walker Howard, a new challenger for the role of Tiger signal caller has emerged this offseason: Jayden Daniels.

A three-year starter at Arizona State, Daniels arrives in Baton Rouge brandishing an impressive set of dual-threat quarterback skills. Last season, Daniels completed over 65% of his passes for more than 2,300 yards and 10 touchdowns, while rushing for more than 700 yards and six scores.

While Brennan showcased his impressive arm strength and accuracy at the beginning of the 2020 season, most Tiger fans would not be fooled into thinking he’s fleet of foot. Brennan is a prototypical pocket passer, standing tall in the pocket, dissecting the defense with an array of strong throws.

Daniels is made for the chaos of a play breaking down, making split-second decisions, thriving as the pocket collapses, and nimbly extending plays with his feet, either to buy more time to pass or by navigating and outrunning the defense to pick up a first down.

“For me, it’s like the quarterback that can make plays with his arms and legs,” Daniels says. “That throws first but can use his legs as a weapon to keep the defense off balance.” 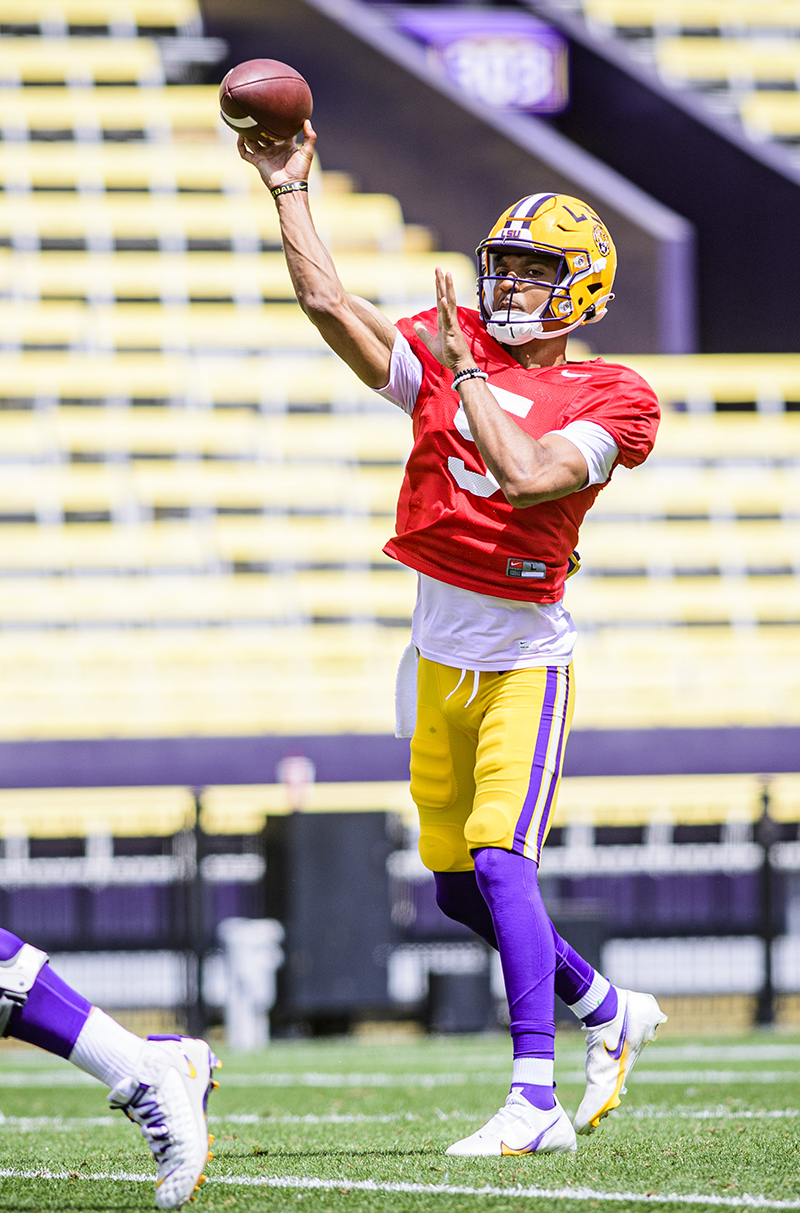 Toss in the two younger, inexperienced LSU quarterbacks, and for the first time in several years, LSU has an intriguing quarterback battle for head coach Brian Kelly and offensive coordinator Mike Denbrock to oversee.

“Our offensive system is based off of how much the quarterback can handle,” Denbrock explains. “We operate our best and at the highest level when the quarterback can kind of take the keys to the Ferrari and run with it. Whoever demonstrates throughout the course of fall camp that they can handle the job, not only physically but mentally, can give our offense that type of leadership. That type of competitiveness that everybody looks for from a really good quarterback is going be key to us having success.”

Denbrock has four quarterbacks with varying levels of experience and a diversity of styles at his disposal and one major decision about who to hand the keys to this season. In Denbrock’s previous job as offensive coordinator at Cincinnati, he oversaw the development of quarterback Desmond Ridder, who emerged as one of the top dual-threat quarterbacks in the country the past two seasons.

On the surface, Daniels’ skillset would appear to better fit the Ridder mold, but Denbrock and Kelly are in the enviable position of having multiple choices at quarterback to incorporate into their offensive system.

“Fortunately, we’re versatile enough in the system that coach Kelly and I have worked together on for over 30 years, that whoever ends up winning the job, we can play to the strengths of the person that wins it,” Denbrock explains. “Whether that’s Myles or whether that’s Jayden or Garrett Nussmeier, Walker—any of those guys that ends up coming out of this competition as the guy. We will tailor what we do and how we do it based off of their strengths and therefore, since the ball runs through the quarterback and in every office, the system gives us the best chance for success.”

Quarterback competitions are nothing new for Daniels. As a freshman at Arizona State, he won the starting job and never relinquished the reins for three years.

“A quarterback competition is always good because it keeps everyone on their toes, and you’re always going to get the best out of everybody each and every day,” Daniels says.

A self-described “reserved kid,” Daniels exudes a subdued confidence, evident by the command he exhibits on the field.

The past two seasons, LSU has been forced to start multiple quarterbacks because of injury and youth. Regardless of who wins the starting job for the Tigers this fall, coach Kelly and Denbrock already have the upper hand on the most important aspect of the quarterback room: depth.