Four walls and a bed—a modest one-bedroom apartment with a little kitchen and neighbors down the hall. For many, these are just the basics of starting out on your own for the first time, but for the occupants of Diversity House, they’re life-saving.

Though only 7 percent of the total youth population identify as lesbian, gay, bisexual or transgender (LGBT), those youths do represent 40 percent of homeless youth in the country. Many of these kids find themselves on the streets after being rejected by parents or foster homes because of their identity, and it can be hard to find a new home that welcomes them for who they are.

The crisis isn’t just about fitting in—62 percent of homeless LGBT youth will attempt suicide, and 58 percent have been sexually assaulted, according to the Center for American Progress.

Diversity House, Baton Rouge’s newly launched housing and rehabilitation facility for homeless LGBT youth ages 16 to 21, aims to change these numbers, starting from the South. It’s the first shelter of its kind on the Gulf Coast.

Rafael de Castro took over in 2013 as executive director of Youth Oasis, a shelter for youths ages 10 to 25, and he’s launched Diversity House as an offshoot of Youth Oasis after witnessing firsthand that something big was missing from the community.

“I had noticed that a lot of our requests [from the state] for kids to house were kids that identify as LGBT,” says de Castro. “When you start looking at the statistics, and you start identifying the tremendous need for helping LGBT young adults, and [you see] that there were really no residential resources for them, we decided to develop a program to offer housing options for them.”

Opened in early March, Diversity House currently houses five young people, with space for 10 total as the program grows. In addition to a safe place to live, the house provides guidance in everything from day-to-day life skills to finding a job or getting a degree.

Inside the one-bedroom apartments allotted to each resident, cooking skills get sharpened and budgets get balanced. For some, Diversity House is the first time they’ve had their own personal space, and they’ve spread their lives out into the corners of these little homes with teddy bears, photographs and all the knickknacks they’ve been able to carry with them this far.

Resident social worker Carrie Patterson works closely with each resident, and even this early in the program, she’s already seen many “powerful little moments” of growth in them.

“What I’m seeing right now is kids coming in for the first time in a long time, or for the first time ever, where they have some emotional space for processing all those different issues,” Patterson says. “It’s not only not worrying about where their next meal is going to come from or where they’re going to sleep for the evening, but also actually being able to do some of that soul searching that kids their age should have the ability and space to do.” 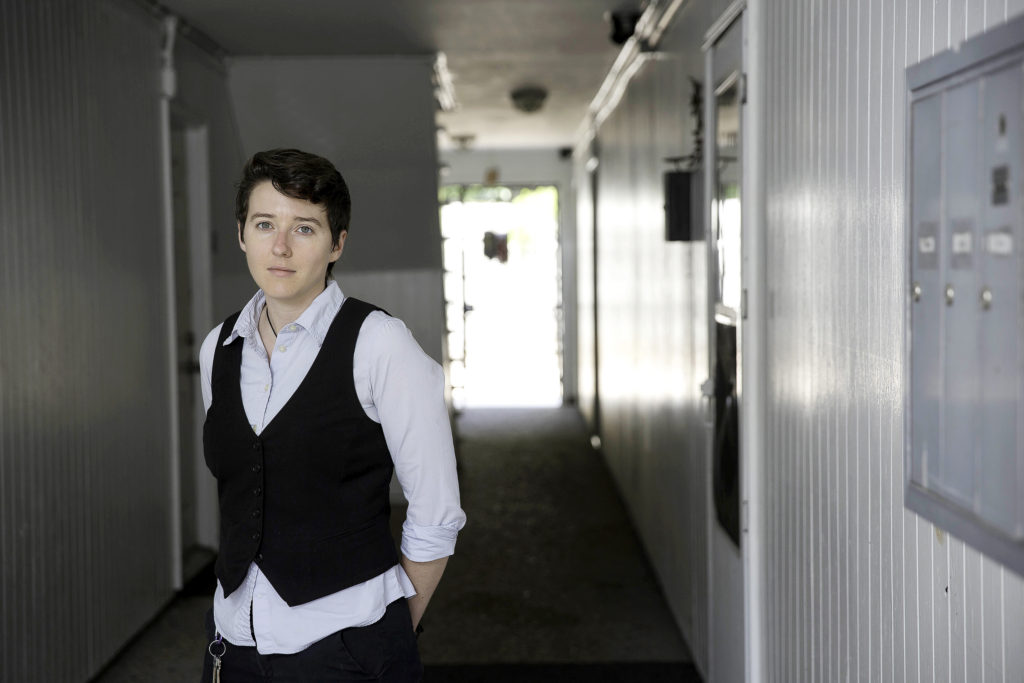 “Their sexual orientation, gender identity, gender expression, that’s kind of a non-issue here. I’d really like to talk about why your grades are so poor but your standardized test scores are so high, and let’s talk about that without talking about why you’re wearing nail polish or the gender of the person you’re dating.”

Each resident is required to work or attend school full-time for the length of the 12- to 18-month program, and common areas, counseling sessions and group workshops keep them connected to other residents and program workers like Patterson.

“The one thing that Diversity House can provide that maybe other placements, settings, caretakers have not been able to provide is that their sexual orientation, gender identity, gender expression, that’s kind of a non-issue here,” Patterson says. “I’d really like to talk about why your grades are so poor but your standardized test scores are so high, and let’s talk about that without talking about why you’re wearing nail polish or the gender of the person you’re dating.”

Still in its early phase, Diversity House will continue to add residents and expand its menu of services as the year progresses. De Castro says with the help of generous individuals and organizations like HIV/AIDS Alliance for Region Two, who helped remodel and paint the facility, there’s plenty more in store for this ambitious project.

“This program was just an idea that I brought to our board in early September of 2015, and it became a reality by the end of January,” de Castro says. “The Baton Rouge community, whether it’s LGBT or non-LGBT, has been so receptive to our program and so helpful in donating and the things that they’ve done that this program would not have been possible without them.

I think it’s a testament to Baton Rouge and where we’re going. … You would think with the fact that it’s never been done before that there would be some hesitation, but it’s been really, really amazingly accepted and supported in the community.” diversityhouse.org