Editor’s note: This story has since been updated to correct the full name of the story’s subject. It’s Natalie Baily Smith. 225 regrets the error.

Many dance legends have tackled the challenging choreography of the musical Anything Goes over the years. Now, local choreographer Natalie Baily Smith gets to add her name to that list when it hits the stage at Theatre Baton Rouge this month.

The musical was first produced in the 1930s and given Broadway revivals over the decades. It tells the tale of an ocean liner en route to London and the forbidden love between stowaway Billy Crocker and heiress Hope Harcourt.

For Smith, it’s an opportunity she’s been waiting for all her life—filled with iconic Cole Porter songs and show-stopping dance numbers from a cast of nearly 30 performers and actors.

The Baton Rouge native began her journey as a dancer at age 3, soon discovering jazz, then lyrical dance, then tap. But she was most drawn to jazz—especially once she became an LSU Golden Girl in 2005.

About three years later, she took the stage for the first time with Theatre Baton Rouge in its rendition of Chicago. Veteran Broadway choreographer Michael Gorman was in charge of the dance numbers, and his past work with the likes of Bob Fosse made him the perfect teacher.

“[Gorman] saw this whole picture and story and brought it together with all of us as different chess pieces,” Smith says. “It was kind of like magic, watching him work. That kind of sparked my interest more than anything.”

But Smith says she was never a star dancer in her early dance classes. “It’s something I had to work really hard at, so the thought of me putting something together for other people to do was something I couldn’t even see [myself] doing,” she says.

Still, she pushed through self doubt and acquired the skills over time.

In 2009, the then-25-year-old choreographed her first show, Little Shop of Horrors at Ascension Community Theatre. Next up was RENT at Theatre Baton Rouge in 2010.

“You need to see something you’ve seen in your mind and on paper come to life and create a story,” she says. “It was a magical experience. And ever since then, I just got addicted to it.” 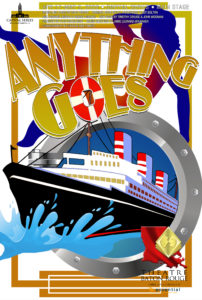 During the audition process, Smith works with the directors to understand the music and what they need from different characters.

She says the Anything Goes auditions gave her plenty of strong dancers to work with, and she’s been given a lot of freedom with the production’s many dance numbers.

Because the musical is set in the 1930s, she was able to tap into some iconic dance styles. “It’s fun working in that realm, that time period,” she says, “because you could do your own stuff but still add those classic dance moves.”

“Blow, Gabriel, Blow” falls under Smith’s forte of dance just because “it’s one of those jazzy, sexy” types of numbers. But she feels the pressure when working on the musical’s title song—“That’s the number that everyone wants to see, and it’s a tap number.”

Tap is one of the more rhythmic types of dance, so she has to consider the sounds of the tap-dancing sailors’ shoes when arranging the movements to add a certain umph throughout the song and to be visually stunning.

“This is going to be very intense because it’s not a super long rehearsal period. They [the performers] are going to be pushed pretty hard,” she says. “I definitely want people to come out and see what they’re able to pull off. This one should be pretty impressive.”