The greatest field goal in LSU football history was going to be good no matter what, all 57 yards of it. The ball had plenty of room to spare as it cut through the fog and split the uprights at the University of Florida’s Ben Hill Griffin Stadium last Dec. 12.

Tigers place-kicker Cade York says he wasn’t even bothered when the hometown scoreboard operator tried to distract him by using a display with blinking white lights. When the kick was in the air, “in between flashes you could see the ball carrying, and I just kind of took off and let the emotions take over after that,” he recalls.

Florida still had one more chance, but ultimately LSU came away with a 37-34 victory. It was the highlight of an otherwise disappointing season, in which York was a star.

The 6-foot-1, long-legged York, who grew up in the Dallas suburb of McKinney and played soccer from ages 4 to 17, finally went all-in on place-kicking before his junior year in high school.

But becoming a college star with a chance to kick in the NFL was the farthest thing from his mind at that time.

“I didn’t start training like (I needed to) for football until after that season,” York admits.

What really changed everything was the success he had at a kickers camp. He was told kicking was his future, and in the next year, York was the top-ranked kicker in the nation. 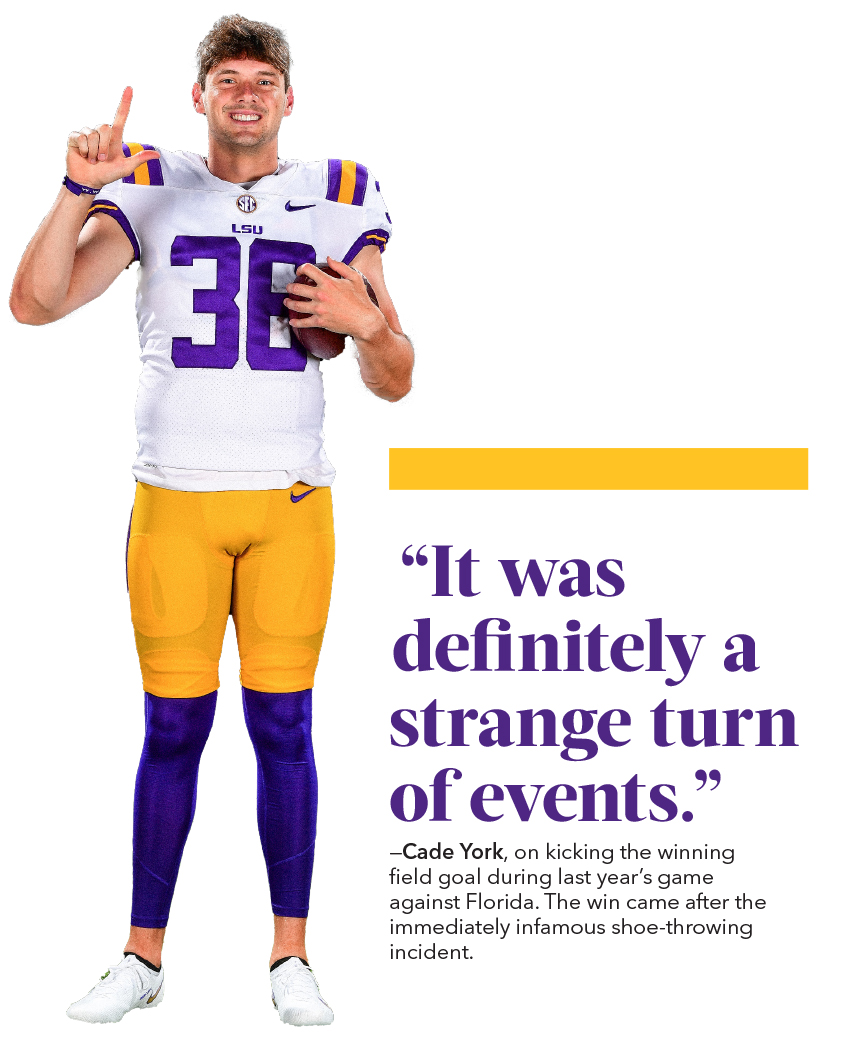 It paid dividends for the program right away.

As a freshman in 2019, York hit 21 of 27 field goal attempts—including a 52-yarder against Ole Miss—and led the nation with 89 extra points as the undefeated Tigers won the national championship.

In 2020, the team struggled, but York made 18 of his 21 field goal attempts and was perfect on all 36 extra-point tries.

This included, of course, that school-record boot against Florida. The score was tied 34-34 and the Tigers’ possession appeared to end on the LSU 25 with an incomplete pass.

“I took my helmet off,” York recalls.

But inexplicably, Florida’s Marco Wilson threw downfield the shoe an LSU player had lost on the field. The resulting unsportsmanlike-conduct penalty cost the Gators 15 yards and kept the drive alive.

“It was probably time to get a few practice swings in,” he says. “It was definitely a strange turn of events.”

York had hit from 75 in practice, but that was off a tee with a wind at his back. But he knew 65 was realistic.

Six plays later, with 27 ticks left and the ball on the Florida 39, York lined up for what would be the longest field goal in LSU history into a fog so thick he could only see the bottom of the uprights.

“That field goal started out as a ‘May Day’ situation. The clock was running down, and we didn’t have any timeouts left, but luckily they called one,” York says. “Otherwise it would have been running out there, taking my steps and kicking it.”

Instead, LSU had time to breathe. Punter Zach Von Rosenberg caught the snap, set it down, and York hit it clean.

“I hit it like it was a normal field goal.”

York, named a second-team All-American, would love to kick one even farther. But, he says, “I’ll just keep making what they give me, I guess.”

This article was originally published in the Tiger Pride 2021 issue of 225 magazine.

Pasta is a weeknight salvation. Here are 7 easy ways to enjoy it

Once a Tiger, always a Tiger: Building a school legacy that lasts [Sponsored]