Business runs in Artie Varnado’s blood. Her mother was the owner of two local women’s clothing boutiques, Denise’s and Foxy’s. Her father started Brown & Brown Custom Clothiers, a longtime Baton Rouge custom clothing store, in 1974. After her father passed in 2019, her two brothers took over the shop.

Surrounded by business-savvy family members, the women’s soccer player had always been inspired to one day launch her own company. In October 2020, she started Finley & Co., a functional apparel and accessories brand. She was motivated by her experiences as a mother of three and wanted to create accessories that make parenting easier.

Reflecting back on her days as a women’s soccer player at LSU, she attributes a lot of her professional skills like organization, time management and maintaining a goal-oriented mindset to lessons she learned as an athlete.

“As a student athlete, you have to map out your time,” Varnado says. “You’re either in class, practice, lifting weights or doing homework. There’s always something.”

The 37-year-old has played sports for as long as she can remember. In high school, she ran track and played soccer at LSU Lab School. From 2001 to 2004, she majored in kinesiology and was a forward on the women’s soccer team at LSU. 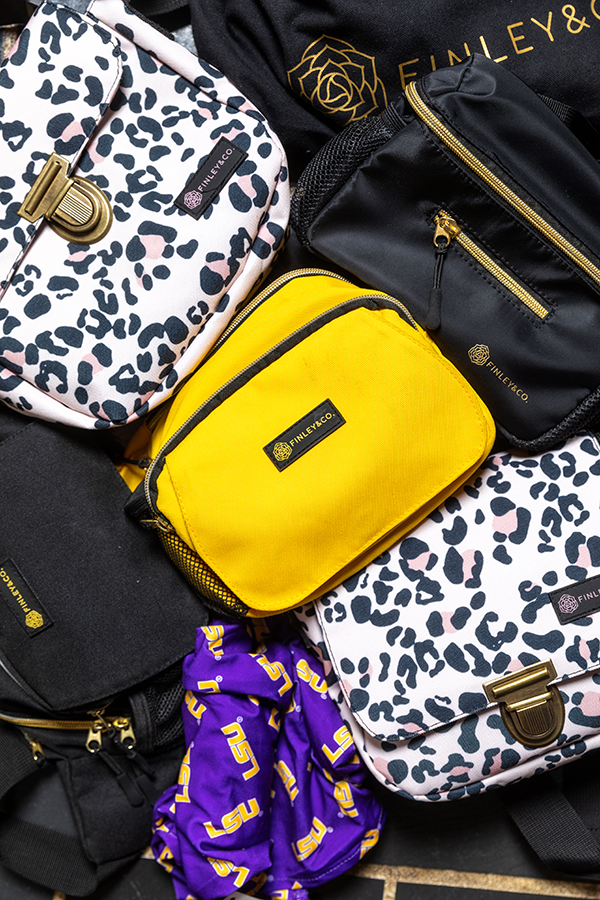 During her senior year, she was at the top of her game. Varnado started in all 20 of that season’s games and was named the team’s Offensive MVP for the third time in her career. She broke school records that still stand today, scoring the most career goals and the second-most career points in LSU history.

After she graduated from LSU, Varnado transferred her dedicated work ethic and hunger for achievement from the soccer field to the professional world. She has been a physical therapist for 13 years. In March 2020, she became an area manager at Senior Therapy Solutions, where she trains patients, oversees properties and provides physical therapy services at senior assisted living facilities.

Physical therapy was her first profession but not her last. When she’s not working at her full-time job or spending time with her family, she’s often juggling responsibilities for Finley & Co.

When she came up with the idea to start Finley & Co., named after her 2-year-old daughter, she had multitasking mothers in mind. Varnado designs accessories like fanny packs and crossbody bags with easily accessible pouches for necessities like baby wipes, cards and cell phones.

“I wanted to help women and parents not be so bogged down by a bunch of bags,” Varnado says.

She started by making hands-free diaper bags and eventually expanded to multipurpose infant car seat covers. Her products have been sold online and at local shops like H Kyle Boutique, Wanderlust by Abby and Le Mercantile de Louisiane. This summer, Varnado plans to release two new products: a waterproof infant cover for car seats and a breastfeeding cover with arm holes and a front zipper for easier mobility.

Varnado isn’t slowing down anytime soon. In addition to her professional life, she and her family started nonprofit Suiting 101 in December 2020 in honor of her late father, Eugene Brown Sr.

The organization aims to help at-risk and underprivileged youth through SAT and ACT test prep, mentorship programs, workshops and clothing drives. On April 17,  the nonprofit held its first suit drive at Goodwood Library, where they received gently used suits to donate to reentry programs for former inmates and organizations that work with at-risk people.

“I plan to build a legacy for my family,” Varnado says. “I’ve got two boys and one girl, so I want to pass down a business to each of my children.” shopfinleyandco.com