There’s a word Jonathan Brown keeps coming back to when talking about his career as an artist: “trippy.” It’s “trippy” to be able to afford his own home and support three young children solely with his art, or to receive an official certificate of commendation from the mayor of Baton Rouge for a mural he painted.

For Brown, who works under the artist name Skinny Dope (a fitting tag for the slight-statured artist), it all seems surreal. He speaks of his accomplishments not as the just dividends of hard work and artistic excellence, but as gifts that have simply tumbled into his path. He’s a stranger to the idea that art can yield a bountiful career—even though his own art has done just that.

“I feel like I’m blessed,” he says today, sitting in his living room. A childrens’ playpen is to his left and an array of his work adorns the wall to his right. “Or I’m in tune with the universe, or whatever you want to call it. I’m on the right path.” 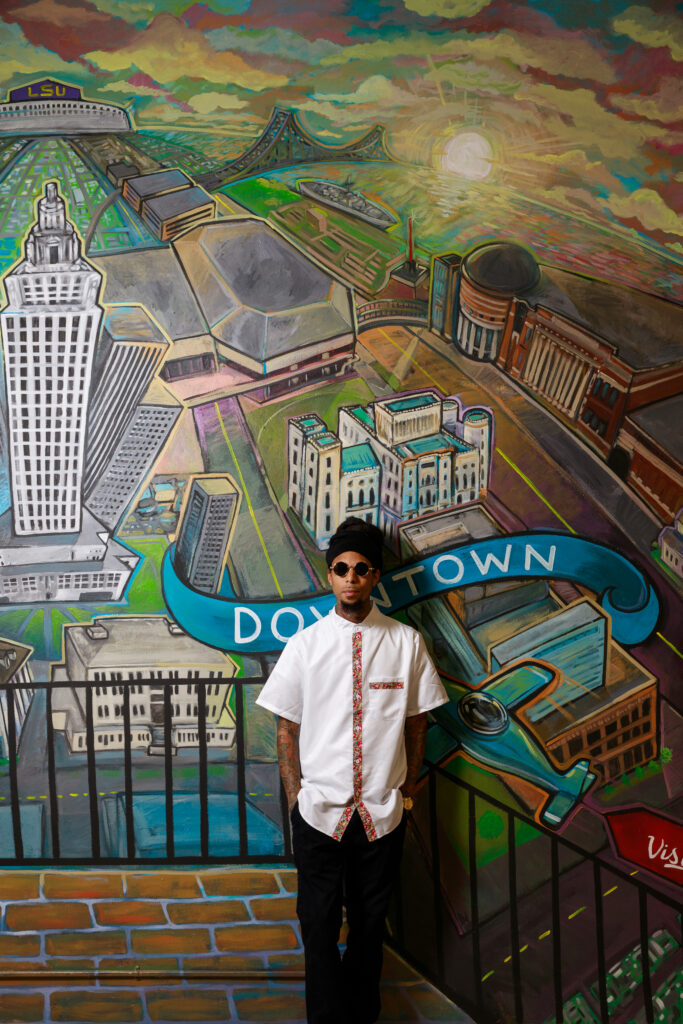 “I didn’t even want to live in Baton Rouge when I first moved here, and now it’s like I’m part of Baton Rouge.”

Whether by providence or his own ambition, the 30-year-old painter, muralist and occasional tattoo artist has been having a fruitful go of things.

The mayor’s certificate of commendation was awarded to Brown for a mural he painted on the Jewel J. Newman Community Center in Scotlandville, completed last December. His colorful Visit Baton Rouge mural of the State Capitol and Baton Rouge neighborhoods is prominently on display at the Raising Cane’s River Center. Before that, he was commissioned by The Walls Project to contribute to a mural of Alton Sterling on North Foster Drive shortly after he was killed in July 2016.

His work is on display all over the Capital Region, where he’s been commissioned by businesses, restaurants and non-profits alike. But to list his manifold works—even just the murals—would require a story of its own.

“He’s always been driven,” says New Orleans artist Terrance Osborne, a longtime mentor to Brown. “He does what artists do when they’re ambitious: He collects ideas, and he pays attention to what he’s seeing.”

From his first exposure to art as a toddler from his mother, an elementary school art teacher, to the love for graffiti that first sparked his eye for eccentric color palettes and bombastic imagery, to his stint as a tattoo artist, Brown has been collecting ideas for a long time. He’s developed a proper arsenal of inspiration, and through his mentorship from Osborne and his own tireless work, he’s honed the tools to execute it.

Brown says it wasn’t until recently that he began to come into his own. Any artist will say it takes a good while to drill down into the well of one’s own vision, but Brown has put in the work—the study, the practice, the meditation—to finally reach his own.

Now, he looks forward to a proper debut in his first solo exhibition, which he says is near on the horizon. Find him on Instagram at @skinnydope_