He knows the comparisons are coming. It’s inevitable with the illustrious name written across his back.

But ever since the start of his basketball career, Shareef O’Neal has been working to create a legacy of his own beyond simply being “Shaq’s son.”

He heard it countless times on the recruiting trail: ”We want you to be better than your dad.”

Not only is that a nearly impossible task, but it’s not the path O’Neal envisions for himself.

As a four-star power forward prospect, O’Neal committed to UCLA out of high school. He played in 13 of 31 games as a redshirt freshman, averaging just 10.2 minutes, 2.2 points and 2.9 rebounds per game before deciding to transfer out of the program.

He felt it wasn’t quite the right fit for him in Los Angeles and ultimately decided to make the move to LSU. He knows the challenges that come with being an O’Neal in Baton Rouge, but he also felt that—ironic as it may sound—being a Tiger gave him a chance to get a fresh start. 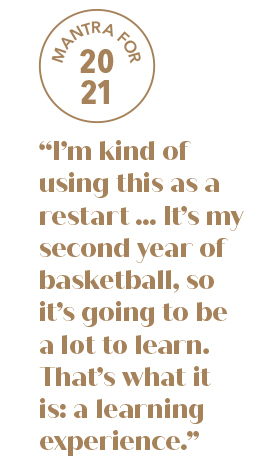 “I feel like when I went [to LSU] to visit, the people there didn’t really talk about my dad one time,” O’Neal said this summer. “Even though there’s a statue outside the stadium. That’s kind of what stood out to me. [They said] ‘We want you to be Shareef. People here love you.’ The LSU family is just really supportive, so I felt like that was the best option for me.”

It’s still early in his Tiger career, but the 20-year-old has already featured in all of LSU’s games this season. O’Neal was averaging 3 points and 5.3 rebounds per game as of early December.

He’s listed as a 6-foot-10 power forward and has already garnered high praise from head coach Will Wade, despite having to adjust to what O’Neal called a “scrappy” style of basketball in the SEC.

“Shareef has been very, very good,” Wade said at a press conference earlier this season. “He’s making shots. He’s a very good offensive rebounder. He’s got good stuff when we give him space in the long post. He’s the best guy we got [defending] the ball right now in the press. He gets deflections. He’s long; he’s athletic. That really sets the tone for your press when you’ve got those guys up there that can make it hard to get the ball inbounds.”

Wade has put together an exciting roster with high expectations for the 2020-21 season, and O’Neal looks to be a big part of that success. And even though his dad’s name will forever hang in the rafters of the PMAC, O’Neal is hoping to make some history of his own.

Editor’s note: LSU Athletics did not respond to interview requests in time for 225’s deadline. All of O’Neal’s quotes were sourced from a previous interview with Bleacher Report.