When she was a kid, Bellizaire was always rearranging the bedroom she shared with her sister.

Despite her early love of interiors, she didn’t imagine she’d grow up to become a designer.

She never predicted that by 2020, her work would have graced magazine covers or that she’d speak on a panel alongside design maven Emily Henderson. Back in her childhood bedroom, where she stacked and unstacked the bunk beds, she didn’t know she was prepping for future “big reveal” moments with clients. Or that campaigning to her mom about paint colors was building the groundwork for public speaking appearances.

“I didn’t realize what I did so naturally was something people struggled with,” says Bellizaire, 41.

After graduating from LSU with a degree in communications, the New Orleans native instead began a career in public relations. Her jobs took her to Texas and eventually back to Baton Rouge, working for companies ranging from Cox Communications to the Louisiana Lottery. By the time she waspregnant with her second child, though, she found herself helping friends pick paint colors and leaning into her love of decor.

“Maybe this is a thing,” she thought.

She started working toward design certifications and attending every conference and training she could. She sought mentors. And she launched a blog to document everything she was learning.It’s the blog she credits with setting her apart as a designer. 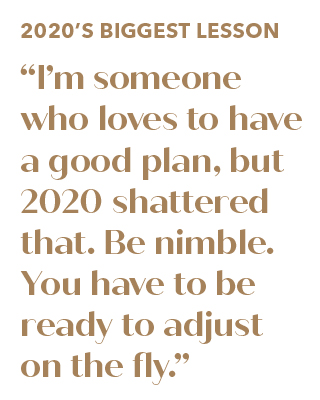 Although interiors was her second career, she leveraged her communications skills to bring her business to the next level.

In 2013—after more than a decade working in communications—she launched Arianne Bellizaire Interiors. It turned out to be a pivot that would later equip her for success in the Year of the Pivots. She’s proud to say 2020 was her business’ best yet.

In the spring, as we were all spending more time at home, interest in design skyrocketed. Bellizaire hosted virtual consultations with clients. In the summer, national shelter publication MyDomaine featured her on its list of “Inspiring Black interior designers we should all be following.” And in the fall, she spoke alongside Henderson—who has long been one of her design idols—for a Black Interior Designers Network panel.

Her recent projects have been all about what works for clients’ lifestyles during a pandemic, when parents are hosting less and homeschooling more.

“People think design is a luxury or that it is superficial. Or they want something that looks like a magazine without realizing that is unlivable,” she says. “Give yourself permission to make a space that is perfect for you. Home should be a place you want to spend every waking moment.”

Because as much as last year taught us, Bellizaire says one of the most enduring lessons will be this: “The way you design your home matters.” ariannebellizaire.com