The past couple of months have been quite a challenge for all of us. For families, this time has meant everyone occupying the same close quarters, and even under the best of situations too much togetherness can get a little stressful.

Considering our current realities, we decided to take this month’s recipe feature in a different direction.

We dug back into our archives to find recipes that could double as fun family activities with preparation requiring multiple hands.

Making meal prep a part of family time is something we have done with our now-almost-grown children for years. It helps make the chore of cooking dinner easier. But we’ve also found it’s a bonding and learning experience for both parents and children.

Fresh, homemade pasta takes just a few minutes to assemble, and the result is well worth the effort 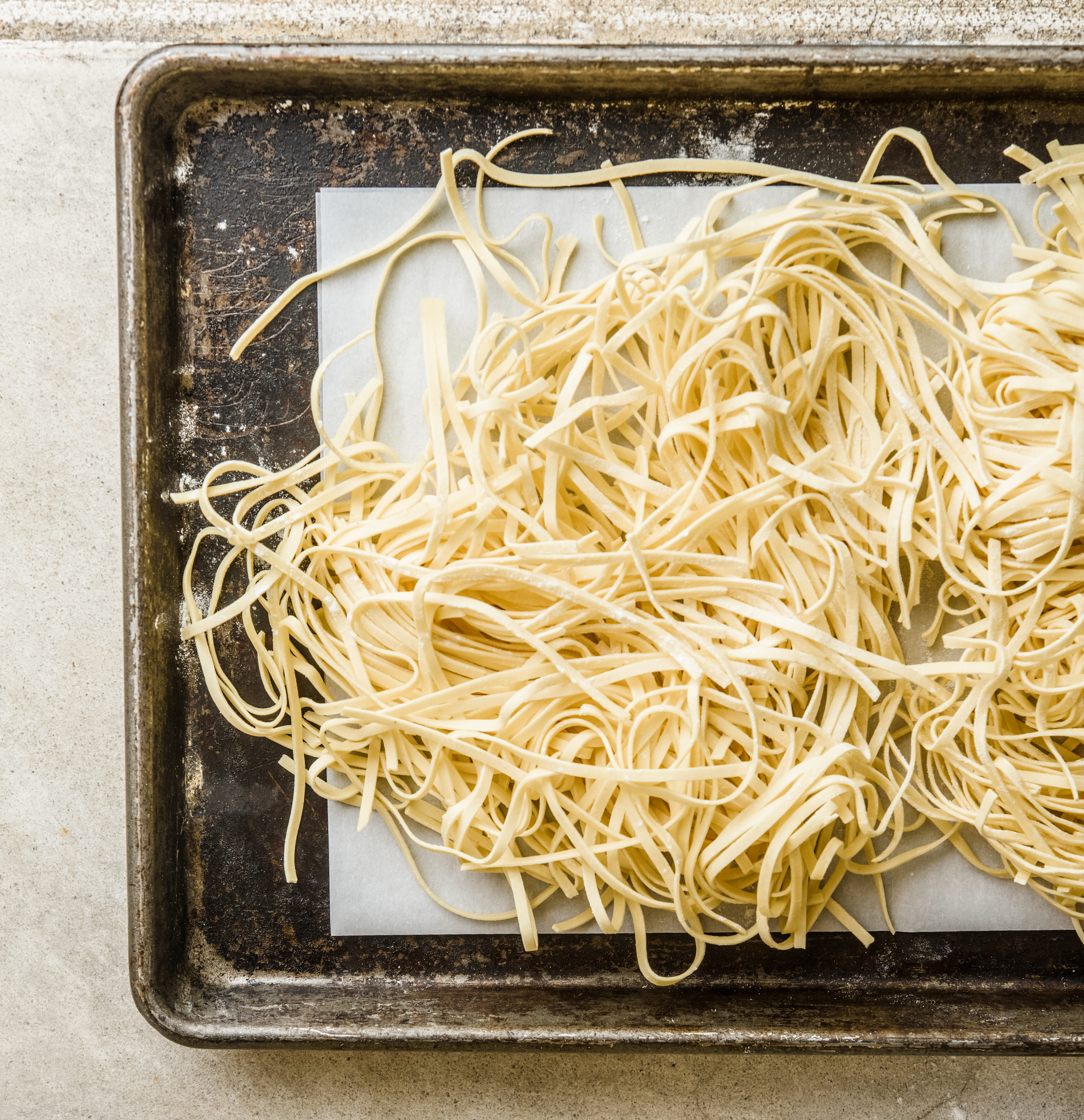 BASIC PASTA DOUGH
Use this simple recipe as the starter for our two fresh pasta dishes.

1. Sift the flour and salt together and place into the bowl of a mixer. Place the dough attachment onto the mixer.
2. Use your fingers to make a well in the middle of the flour. Pour in the eggs.
3. Turn the mixer on low and add the olive oil. As the dough begins to mix and come together, add the water, one tablespoon at a time, until the dough forms a ball and begins to pull away from the sides of the bowl.
4. Bring the speed up to medium, and continue mixing for 3 to 4 minutes or until the dough ball is smooth and everything is well incorporated.
5. Remove the dough from the mixer and wrap in plastic wrap. Allow the dough to rest before working with it.

FRESH RIBBON PASTA WITH ROASTED RED PEPPER PESTO
This pesto sauce is a great alternative to basil pesto and is a bit heartier. The smoky hint of the roasted red peppers along with the salty bite of the cheese made this our new favorite go-to sauce. It’s delicious as a topping for fresh pasta. 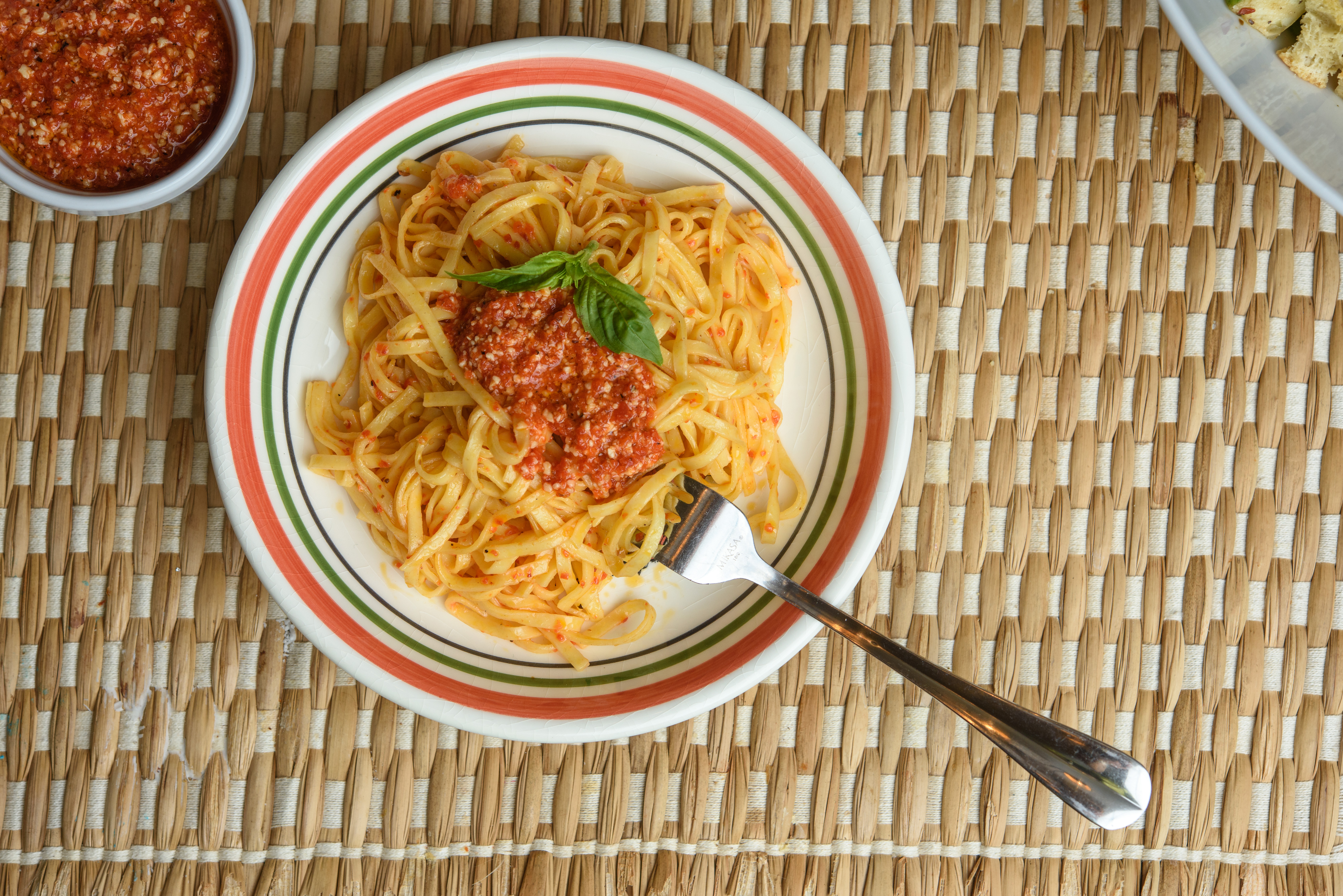 1. In a food processor, combine the garlic, almonds, salt and red pepper flakes. Begin pureeing. With the machine running, pour in half the oil until a paste forms.
2. Turn off the processor, scrape down the sides and add the roasted red peppers. Turn the food processor back on and continue pureeing until smooth.
3. Turn off the processor again, and pour in the remaining oil and Parmesan cheese. Pulse a couple of times to blend. Pour the pesto into an airtight container. It will keep in the refrigerator for up to 1 week.

To prepare the pasta:

1. Divide the pasta dough into 4 pieces. Set your pasta machine on the thickest setting. Dust 1 piece of the dough with a little flour and begin rolling it through the machine into a sheet. Continue rolling out the dough, reducing the thickness level on the machine as you go.
2. Once you have reached your desired thickness, run the sheet through the attachment side to cut the pasta into ribbons. Sprinkle the pasta with a little flour to prevent it from sticking together. Place it on a baking sheet in a thin layer until you are ready to cook.
3. To cook, bring a large pot of water to a rolling boil. Add a teaspoon of salt.
4. Drop in the fresh pasta. Stir to prevent sticking. Boil the pasta 3 to 5 minutes or until it is just tender. Drain well. Immediately toss the warm pasta in your favorite sauce or pesto, and serve.

SPINACH RAVIOLI
The method for making these raviolis is pretty simple, and leads to a stuffed pasta just like the pros do it. The spinach filling is creamy and salty, adding delectable heft to this dish. 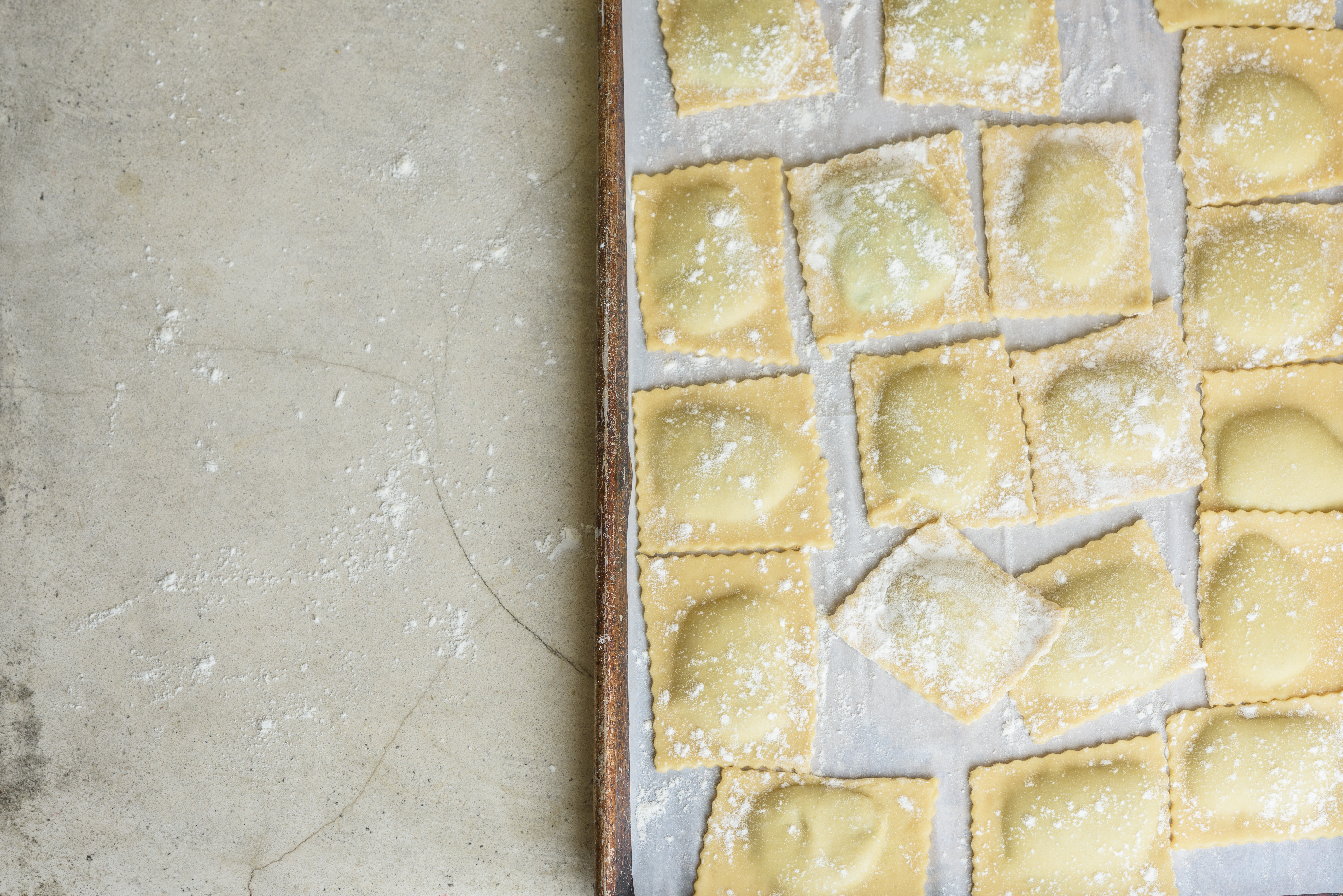 To make the filling:

1. In a food processor, coarsely chop the spinach.
2. In a large skillet, heat the olive oil on medium. Sauté the shallots and garlic for 1 minute.
3. Add the chopped spinach, salt, pepper and dried herbs. Cook until all the liquid has evaporated. Turn off the heat.
4. Fold in the ricotta and Parmesan until the mixture is combined and creamy.
5. Fold in the beaten egg. Allow the mixture to cool completely before filling the raviolis.

1. Cut the pasta dough into eighths. Follow the directions on a pasta machine to roll out the dough into 15- to 16-inch long sheets that are about 5 inches wide. (This should make 6 raviolis per sheet.) Lay the sheets on a flat surface dusted with flour. Place a damp towel over the pasta sheets to keep them from drying out.
2. Leaving a 1½-inch outer border and working so that there is an inch between each mound of filling, place 6 even teaspoons of spinach filling in a row down the middle of the dough. Brush a little warm water around each mound. Lay a second sheet of rolled-out pasta on top.
3. Gently press around each ravioli to get rid of any excess air. Then use a sharp knife or a pastry cutter to cut out 2-by-2-inch raviolis.
4. Sprinkle a little flour on a baking sheet and place the raviolis in a single layer until you are ready to cook. Continue the steps until you have used all the pasta sheets and filling. You should end up with 36-40 ravioli.
5. To cook the ravioli, bring a large pot of water to a rolling boil. Add a teaspoon of salt to the boiling water and drop in the raviolis.
6. Stir to prevent sticking and cook for 3-5 minutes or until the raviolis begin to float to the top. Drain well and toss with your favorite warmed red sauce.

These recipes originally appeared in the August 2017 issue of 225. 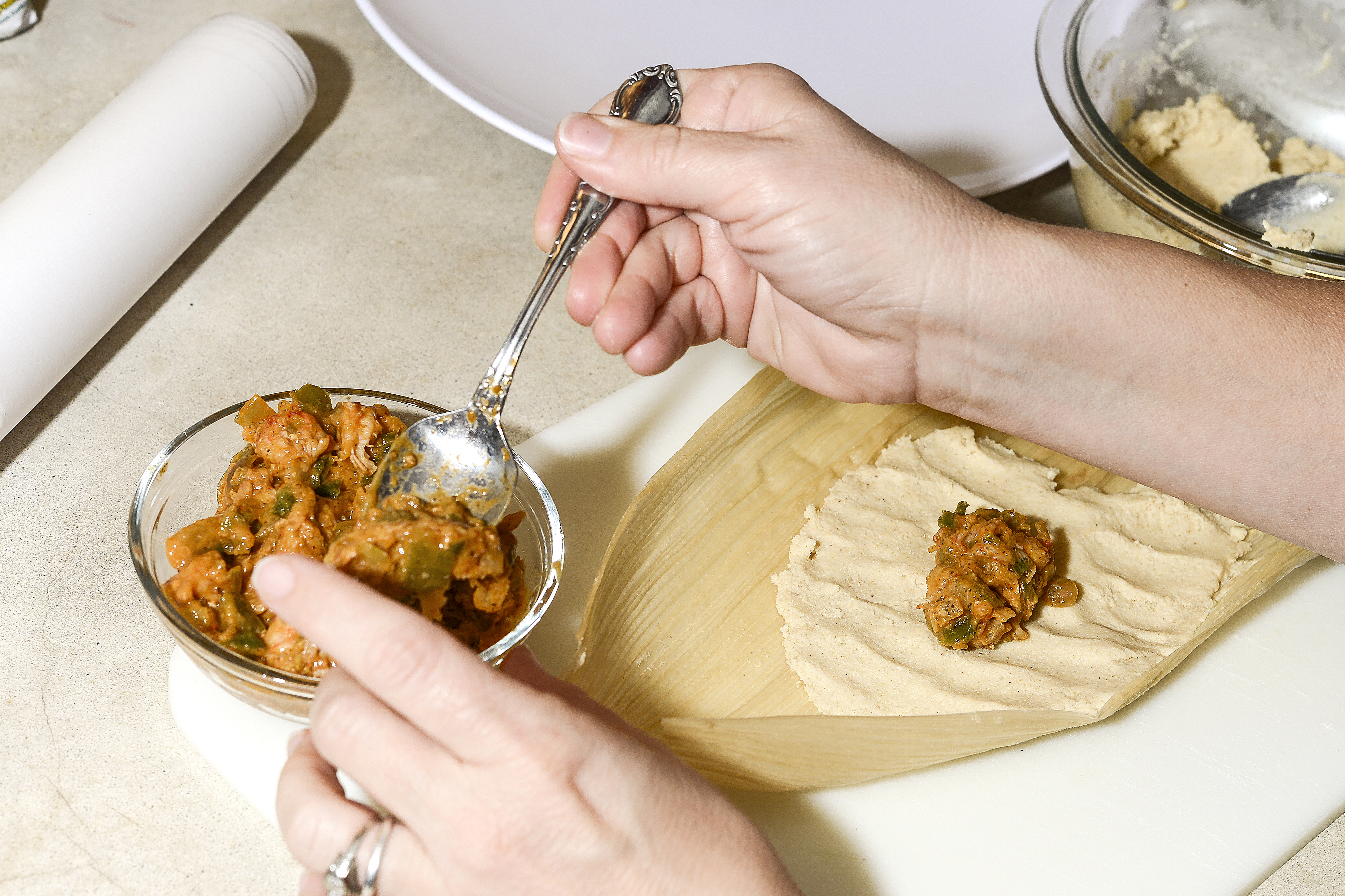 These might seem a bit unusual, but they are a lot of fun to make when you have plenty of hands to help you cook! The filling can be made a day in advance. The corn flour used to make the masa and dried cornhusks are easy to find in local supermarkets on the Hispanic or Latin American aisle. You can also use parchment paper, and the result is every bit as delicious. Double the tamale recipe and freeze half to steam another time.

For the crawfish filling:

1. In a skillet, heat the vegetable oil. Sauté the onions, bell peppers and jalapeńo over medium-high heat for 3-4 minutes.
2. Add in the flour. Continue to sauté for an additional 2-3 minutes.
3. Fold in the crawfish tails, chopped green chilies and water. Stir until everything is incorporated.
4. Add in the rest of the ingredients. Reduce the heat to medium low.
5. Allow the mixture to come up to a simmer, stirring to prevent it from sticking.
6. Simmer for a couple of minutes, or until crawfish are cooked through.
7. Remove the filling from the heat. Allow it to cool while you make the masa. 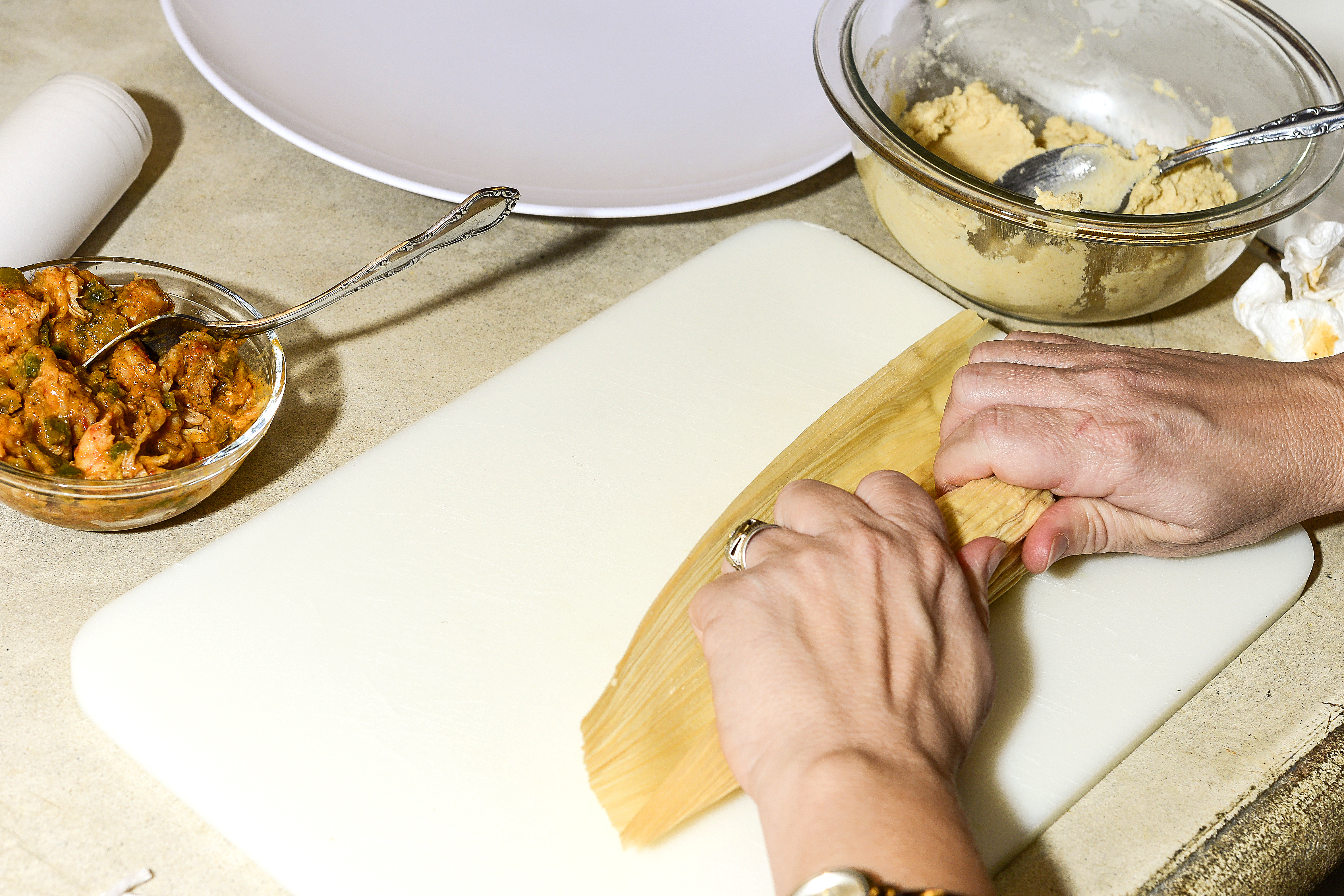 1. In a large mixing bowl, sift together the flour, baking powder, salt and seasonings until well blended.
2. Using a pastry cutter or a fork, cut the shortening into the dry ingredients until the mixture looks like wet sand.
3. Using a wooden spoon, stir in the broth until a dough is formed and is about the consistency of peanut butter.
4. Cover the dough and allow it to rest until the crawfish filling is cool enough to handle. (Both the filling and masa may be made a day in advance). 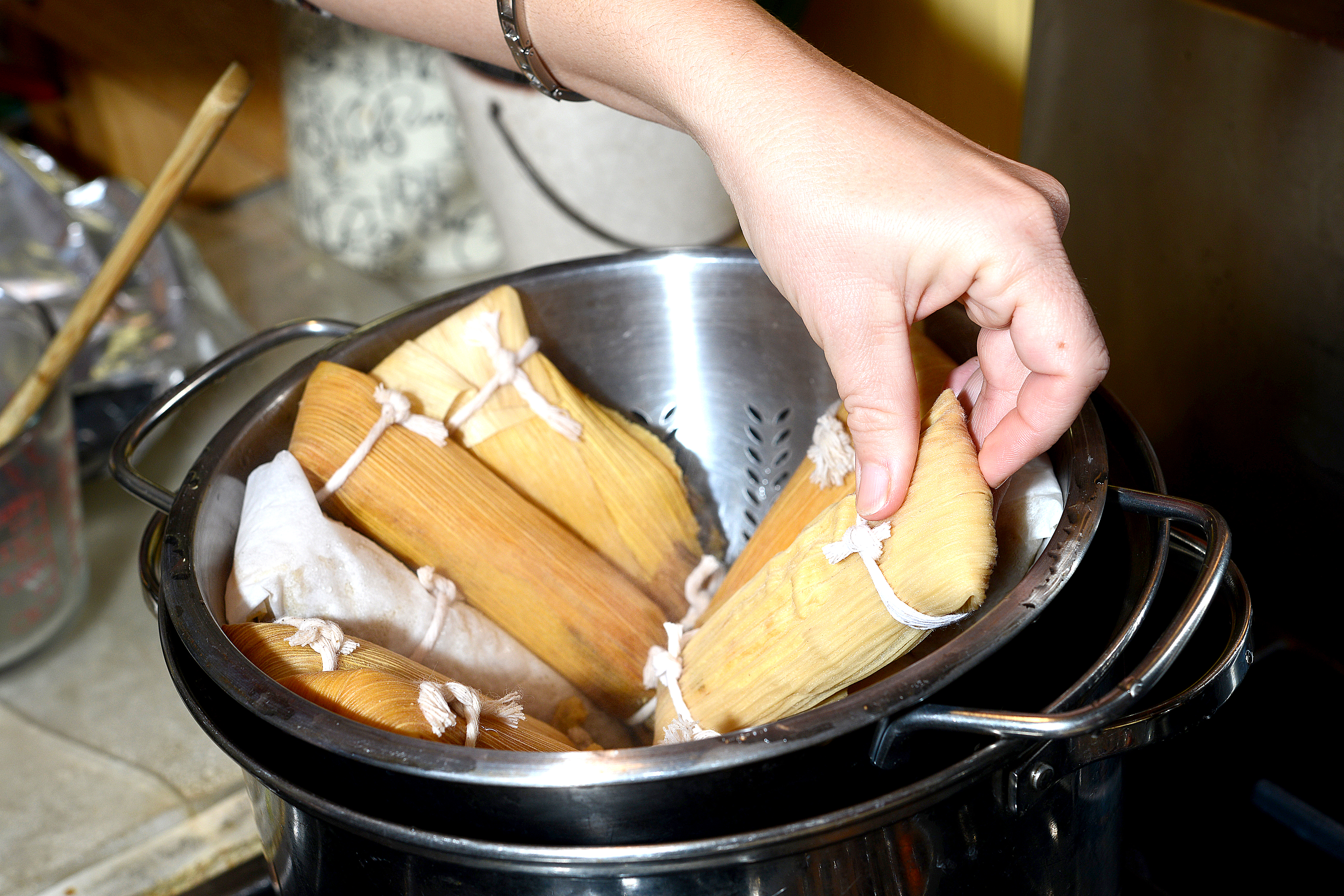 To assemble and cook the tamales:

1. One hour before you are going to assemble the tamales, bring a large pot of water to a boil.
2. Once the water is boiling, turn off the heat and place the dried cornhusks into the boiling water. Allow the cornhusks to soak for 1 hour or until they are quite soft and pliable.
3. To set up your assembly line, drain the cornhusks and pat them dry. Have kitchen twine and a pair of scissors ready along with the prepared masa and filling.
4. Select the larger cornhusks to work with, and note that you can put two smaller husks together to form one big one. A husk about 12 inches long is needed to make a 6-inch tamale. Lay the husk smooth side down and place about a tablespoon of the masa near the top or the wider end of the husk. (Make sure to spread the masa, leaving 2 inches from the top and 3-4 inches from the bottom of the narrow end.)
5. Press the masa down one-fourth inch thick all the way to the edge nearest you into a 6-by-6-inch square. (There will be an inch or so of the husk left uncovered, which will leave you plenty of room to roll the tamale).
6. Spoon in a little of the crawfish mixture into a strip down the middle of the masa, leaving a border of the masa on all sides.
7. Fold the tamale up like a taco so the filling is covered by the masa. Begin to roll the tamale tightly, gently squeezing as you go until the tamale is completely rolled up.
8. Fold up the narrow end over the seam followed by the wider or top end. Lay the tamale down and tie it in the middle with a piece of kitchen twine. Place the rolled tamale into a steamer basket or colander and repeat the previous steps to roll your next tamale.
9. To finish the tamales, place the steamer basket or colander into a large pasta pot or steam cooker. Pour enough water into the pot to cover the bottom of the pot but not high enough to reach the basket itself.
10. Cover the pot and bring the water to a boil. Steam the tamales 35-45 minutes or until the masa is set but not too dry.

This recipe originally appeared in the March 2013 issue of 225.

Where to grab a meal this weekend in Baton Rouge

Use basil from your home herb garden for this refreshing gimlet