“It was pepperoni, of course,” he says.

It was the 1960s when Wesley first sank his teeth into that gooey cheese. He was just a kid, and his father, Bobby, had recently purchased the restaurant from its original owner, Joe Alesce.

From an early age, Wesley learned all the ins and outs of the restaurant from his dad. Well before his 18th birthday, he was a pro at cleaning tables, making pizzas and working the counter.

So when Bobby died in 1996 after a long battle with cancer, Wesley was ready to run the show.

While the world outside Pastime’s walls has evolved over the years since, much has stayed the same. Many staff members have worked there for decades. Generation after generation of the same families will bring their kids for pizza and po-boys.

And the pizza recipes are 70 years old. Inside the kitchen, toppings are layered over the dough and sauce first, and then the cheese is added as the final touch. It’s the traditional way, “like a real pie,” Wesley says.

Pizzas are cooked on a stone deck, and when they come out of the oven, the crust is crispy and the cheese is bubbly. The most popular flavor, Boudin Pizza, even has a registered trademark.

But for a restaurant so devoted to tradition, it has never hesitated to keep up with the times. Wesley is the kind of owner who personally responds to every review on sites like Yelp. Before food trucks became a big trend, he’d bring a mobile pizza oven to kids’ baseball games and parks to make pizzas onsite.

And when the pandemic arrived in Baton Rouge a year ago, the restaurant was just as quick to adapt. During the stay-at-home order, it set up tents in different neighborhoods for drive-thru pizza pick-ups. It also introduced pizza kits, boxes full of everything customers need to build a homemade pizza.

“I remember having Chef Boyardee pizza kits as a kid. And when you’re little, no matter what you put on there, it always tastes great because you made it,” Wesley says.

The pizza kits took off like wildfire. Last March and April, the restaurant was selling up to 225 per week. They are now a permanent menu offering, as well as pre-made, take-and-bake pizzas. 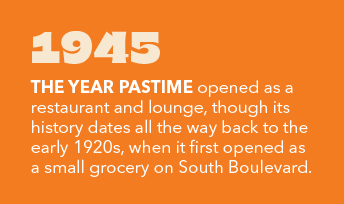 In the months since, Pastime has continued to dream up ways to provide fun for families during the pandemic. Since so many children have missed out on birthday parties, the restaurant offers a kids’ pizza-making experience. Children can work alongside the kitchen team to craft their own pizzas. They’re allowed to build it however they want—even if it’s designed in a way that might melt all over the oven.

“When we give it to them, they say it’s the best pizza they’ve ever had,” Wesley says with a laugh. “I’m training future pizza makers for Pastime.”

Even 75 years in, Pastime is innovating.

But that’s the way the restaurant has been from the beginning.

Back when pizza was still a novel concept in much of the United States, Pastime was one of the first to introduce it here.

“When nobody in Baton Rouge knew what a pizza was, we were making them here in this little restaurant,” Wesley says. “We like to think we paved the way.” pastimerestaurant.com

How a small church in St. Amant is inspiring inclusivity amidst isolation