Two Roombas roll past the metal shelves, humming over the soothing music playing in the fairly small growing room. A big neon sign glows overhead. On shelves, green shoots pop out of black trays. Everyone who passes through the room wears aprons and gloves to comply with regulations. Welcome to Micro Pharms.

The small business grows and sells microgreens locally, specializing in more than 20 types of the small herbs. Micro Pharms is USDA certified, and also certified naturally grown, which means no synthetic fertilizers, pesticides, herbicides or GMOS are used.

The products range from micro kale to radish shoots to amaranth. Each tray is germinated in covered cases, and then grown for about seven to 14 days before being harvested and packaged. The room is kept warm, and the water used for the plants filtered before use.

Christopher Pham—owner, founder and sole employee—started Micro Pharms about five months ago when he decided to start eating healthier and had trouble finding microgreens in the Baton Rouge area.

Right now, he sells about 30 trays a week, packing them into containers of two servings each. The packaging is his own design, keeping with a theme of cute baby microgreens. Pham is also currently working with Rouses and Southside Produce Market, hoping to expand his reach.

Since he started, he has been working both at the shop and at his day job as a car salesman. While it’s a little challenging to do both, he says it’s all about the ”hustle,” really. He enjoys being with the plants.

“Basically coming here and being with the plants, it’s my little sanctuary,” he says.

He walks around the room and points out all the different sproutings, talking about the flavors of chives, pulling out some packages of microgreens from the freezer. One favorite is amaranth, the bright pink grain pictured on his logo. He’s also growing edible flowers, which take longer than microgreens.

This new space, which he’s only been in for a month, is already decorated with large prints created by Pham’s sister, who is an artist. 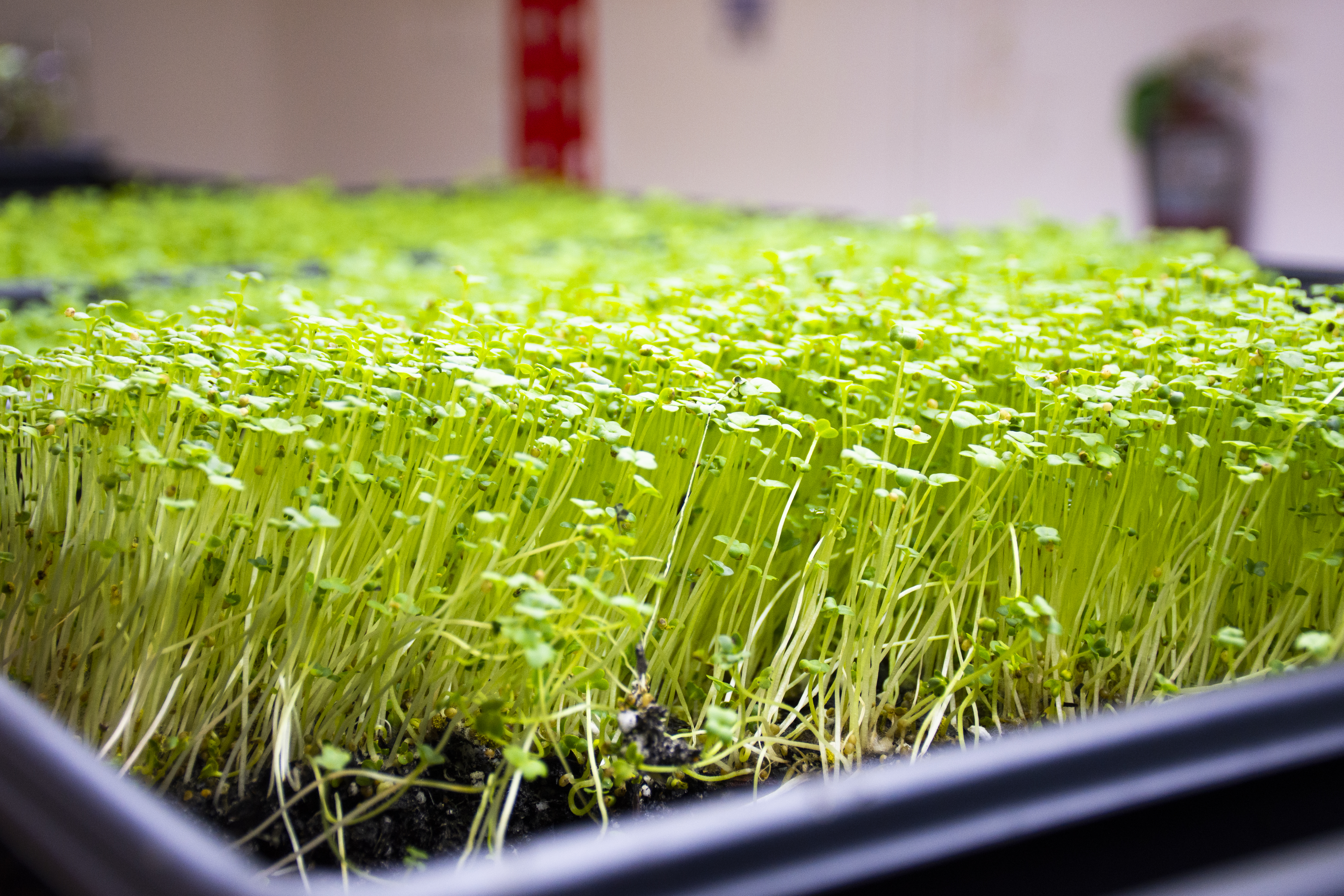 Pham says he saw the microgreens trend first in New Orleans, and wanted to bring it back to Baton Rouge when he realized how difficult they were to find here.

“There’s not that many places that grow it here, so it was hard to get them,” Pham says. “With me here in the middle of Baton Rouge, I can just hand them out to customers, easy peasy for them.”

One of the more unusual uses of his products comes from the restaurant Wing Fingers in Lafayette, which puts radish shoots from Micro Pharms on top of its hot wings. Locally, you can find the Micro Pharms greens in dishes at places like Soji: Modern Asian and Umami Japanese Bistro.

For the most part, Pham says people buy his produce because they want fresh, healthy greens.

If you want to pick up some greens or see him in action, Pham will be making “magic noodles,” which are noodles colored a bright blue by pea flowers, at the Oct. 16 Night Market at Soji: Modern Asian.