St. Patrick’s Day is right around the corner. And for many of us here in Baton Rouge, that conjures happy memories of a cool spring Saturday enjoying Mary Lee doughnuts and bloody marys in the morning, boiled crawfish and green beer in the afternoon, and the Wearin’ of the Green parade somewhere in between. It’s one of our favorite Baton Rouge events! Alas, thanks to the ongoing pandemic, we’ll have to forego the festivities for a second year in a row.

Still, we have to make the best of it, so we decided to celebrate this holiday by making a truly authentic Irish meal.

Irish cuisine has become much more refined in recent years, and there’s plenty to like about it. What we really appreciate about this style of cooking, however, is that it is simply good, hearty, stick-to-your-ribs kind of food. We went totally traditional and made a soda bread and an Irish-style beef stew. For our sweet treat to top off the meal, we went with a more modern twist on Irish cooking and made a rich brownie fortified with what else but Ireland’s most famous brew: Guinness stout.

It’s no wonder with the cold wet climate in Ireland that stews are served year-round, though the weather was not actually the main reason it became such a popular dish. It was a one-pot dish filled with ingredients that were inexpensive and readily available, such as lamb, onions and lots of potatoes. Other root vegetables were sometimes added, like carrots or turnips, for flavor. Everything was thrown into a large pot and simmered down with a little water, broth or beer for a few hours. The result was a hearty, inexpensive meal that would keep families well fed. As Irish immigrants came to America, lamb was replaced by beef, which was more popular and readily available. We have created a delicious rendition of this dish and adapted it to work in a slow cooker. This stew gets its rich flavor from a combination of Guinness stout and beef broth. If you do not have a slow cooker, you can use a heavy Dutch oven or a large pot with a tight-fitting lid. 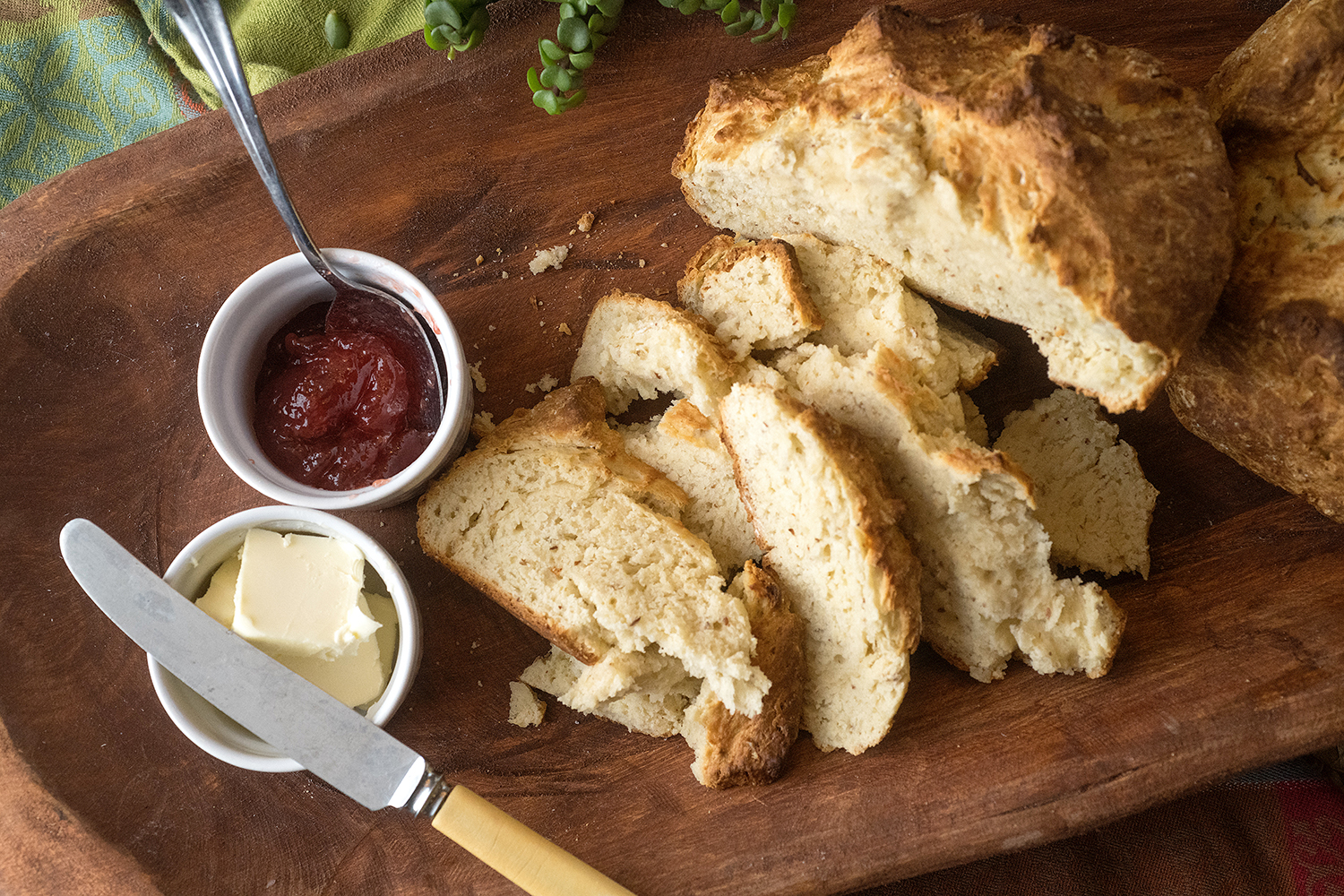 Soda breads have been a staple in parts of northern Europe since the 1830s, when sodium bicarbonate (baking soda) was first introduced. It replaced the need for using yeast as a leavening agent in this type of bread, reacting with the acid in the buttermilk and creating bubbles that allow the bread to rise as it bakes. In Ireland, which was a poor rural country with limited access to ingredients, soda bread quickly became a household staple because it only requires flour, buttermilk, salt and baking soda. A traditional soda bread is dense and moist with an extremely hard crusty outside, making it hearty and filling. We experimented with several different recipes to create our own version. Adding butter and an egg helped enrich the bread, while making it a bit more tender and silkier. Many recipes call for sugar to help offset the bitterness of the baking soda. We added honey instead because we liked the consistency. We also incorporated a little rolled oat and milled flax seeds to bump up the bread’s hearty side. 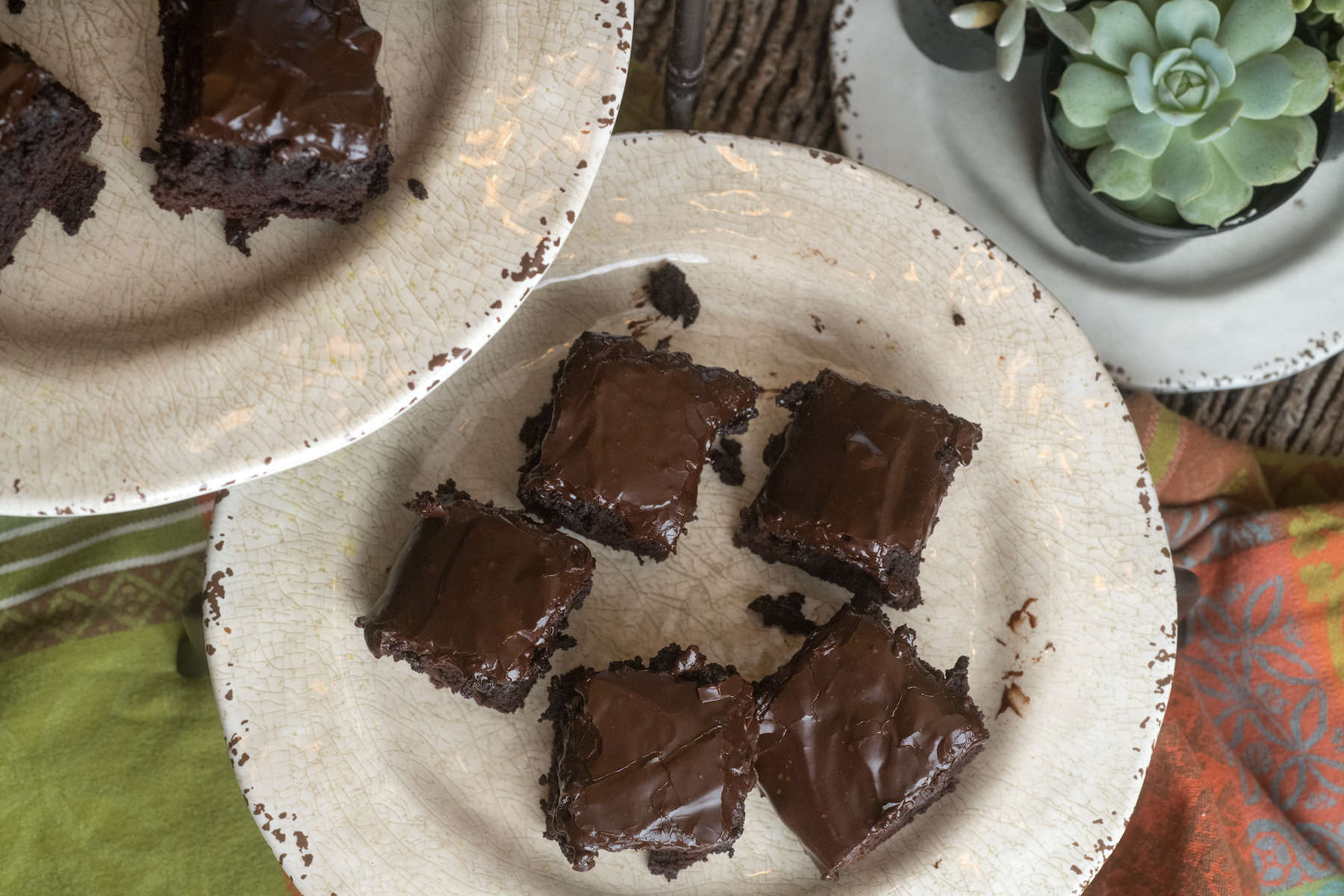 Nothing finishes off a meal like a little something sweet, and these brownies are definitely a chocolatey treat. They are just the right balance of fudgy brownie and moist chocolate cake. The addition of the Guinness helps to deepen the richness without making them too intense. This is a fabulously rich dessert with a sophisticated flavor profile that will bring out the chocolate lover in anyone—and they’re super simple to make. Your friends won’t believe they’re homemade.