Editor’s note: This story has been altered since it was first published. The owners of the bar have gone through a few name changes and have landed on The Lost Cove.

The Cove bar served Baton Rouge with its book-sized cocktail list and extensive beer menu for more than a decade. The CitiPlace spot was somewhat under-the-radar but accumulated a solid crowd of regulars over the years. So, when the pub announced last fall it would be closing and opening a new location elsewhere, we couldn’t help but feel a bit nervous. How long would it take to reopen? And would a new bar mean an end to the old comforts so many loved and cherished?

Luckily, our worries were met with relief as we got to check out The Lost Cove on Essen Lane, which is holding its grand opening this Friday. Impressive dishes, a large assortment of beer and spirits and a staff eager to help serve as the foundation to this new pub, which mixes new and old features.

The Cove’s team initially closed down their longstanding bar due to building maintenance issues, and the owners searched for a standalone location that would usher in customers old and new. When French Quarter Daiquiris on Essen Lane closed after more than two decades in business, The Cove team knew they had to act fast.

General manager Jeff Barnett says the staff completely gutted the entire space, ripping up flooring, replacing sheetrock and ultimately transforming it into the warm pub that stands today. The large daiquiri machines were replaced by a full wall of unique spirits, the neon beer signs switched out with modern lighting fixtures and wall decor. 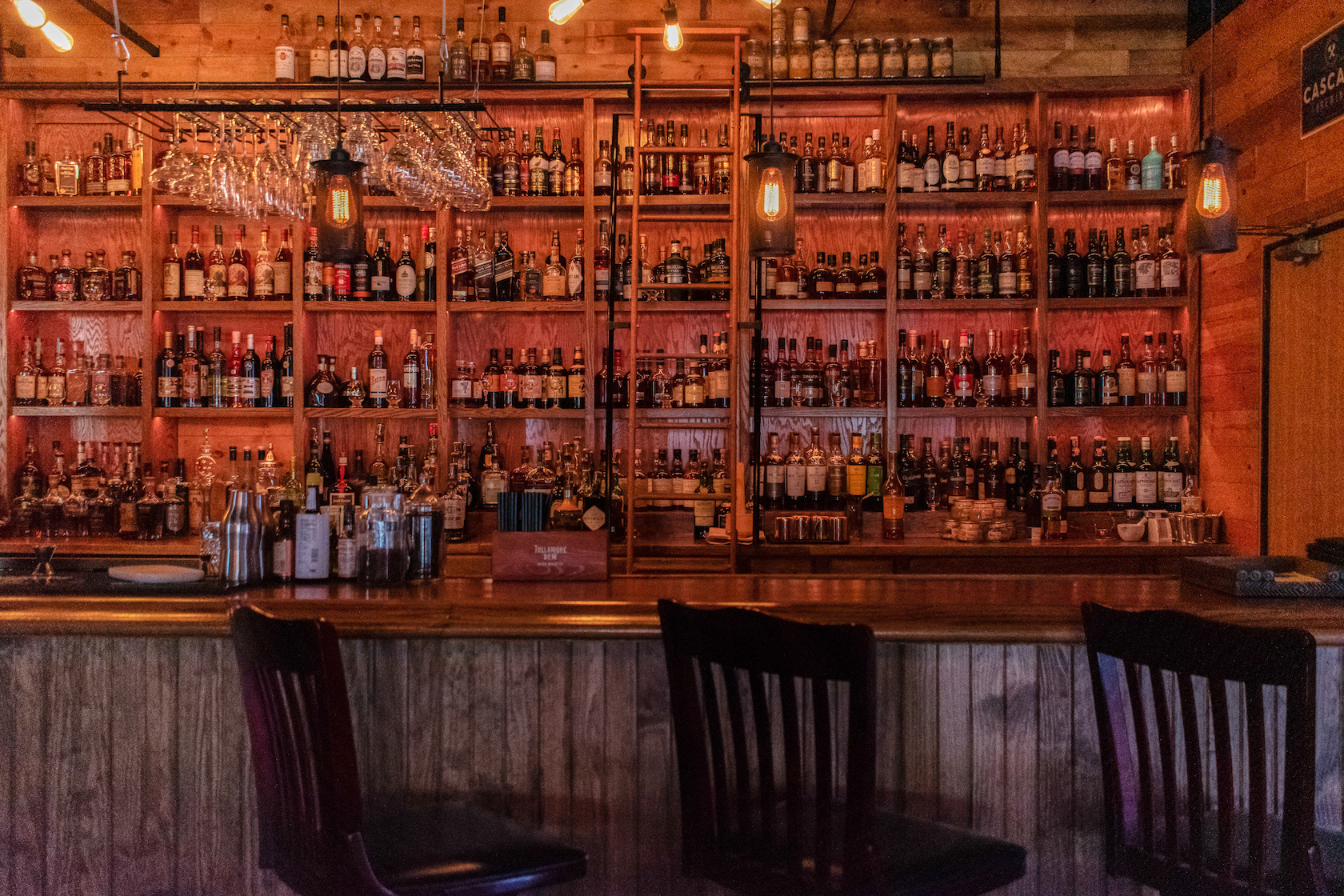 The updates result in a completely new space, oozing charm and relaxing vibes with wood accents and brown leather couches. The interior also complements the practically endless drink options The Lost Cove offers. The pub carries a hefty lineup of beer, many locally made or unlike what is typically offered at any bar around—something fans of The Cove have come to expect. Sticking to the brand, The Lost Cove also carries more than 700 spirits, with a large cocktail menu of traditional classics as well as seasonal drinks making use of all those scotches, bourbons, rums, tequilas, absinthe and even mezcal.

But let’s talk about the grub. With a new name and location comes a first for the bar: the introduction of a food menu. From sandwiches and an intricate Brussels and hummus dish to a fresh house salad and a flourless chocolate cake, the bites add an entirely new experience.

I tried the Boutine Fries, house-cut fries topped with boudin, cheese curds and practically drowned in pork au jus. The dish was savory, warm and delicious—a guilty pleasure in every bite. I also tried Phil’s Spicy Sausage Poor Boy, which consisted of a crawfish boiled sausage, Brussels slaw and spicy ketchup all stuffed in a thick pretzel bun. The intermingling flavors and the inventive use of ingredients made this dish less of a standard pub dish and more of a culinary work of art.

Of course, I wanted something a little sweet to round out my trip, so I opted for the House Crema Cake. A dense, condensed milk-soaked cake with blackberries, cream-cheese icing, and a French Truck Coffee crema glaze. It created a rich and indulgent dessert that only emphasized the bar’s skill for really good food.

All in all, The Lost Cove has somehow combined nearly everything good from the old location with outstanding new additions, creating some sort of mega-pub that offers whatever you need—bites, brews or bourbon.

The bar is currently undergoing a name change and hasn’t updated its website with the new name. As of press time, the owners confirmed the name The Lost Cove.