I recently hosted some former Baton Rouge residents who now live out-of-state, and they were naturally excited to chow down on some Louisiana favorites. I suggested Jed’s Local, knowing a po-boy lunch was right up their alley.

The interior of this space in the Goodwood Shopping Center has been transformed with an industrial feel, wood accents and historic black-and-white photos on the walls documenting the New Orleans streetcar worker strike of the 1920s.

I was surprised by how few tables were spread around the dining room. However there were several stools along the front bar positioned at a wide bank of windows—perfect for a quick solo lunch. The overall vibe is more of a quick lunch spot, anyway, though the restaurant does offer a curated bar in case lunch turns into happy hour.

At first glance, the menu looks overwhelmingly heavy, with fried this and cheese/meat/gravy-smothered that. It even offers french fries covered in red beans. Whew! But there is a handful of lighter offerings of grilled seafood platters and protein-topped salads. If your meal must be light but still delivered between bread, there’s even a flavorful Grilled Shrimp Banh Mi. 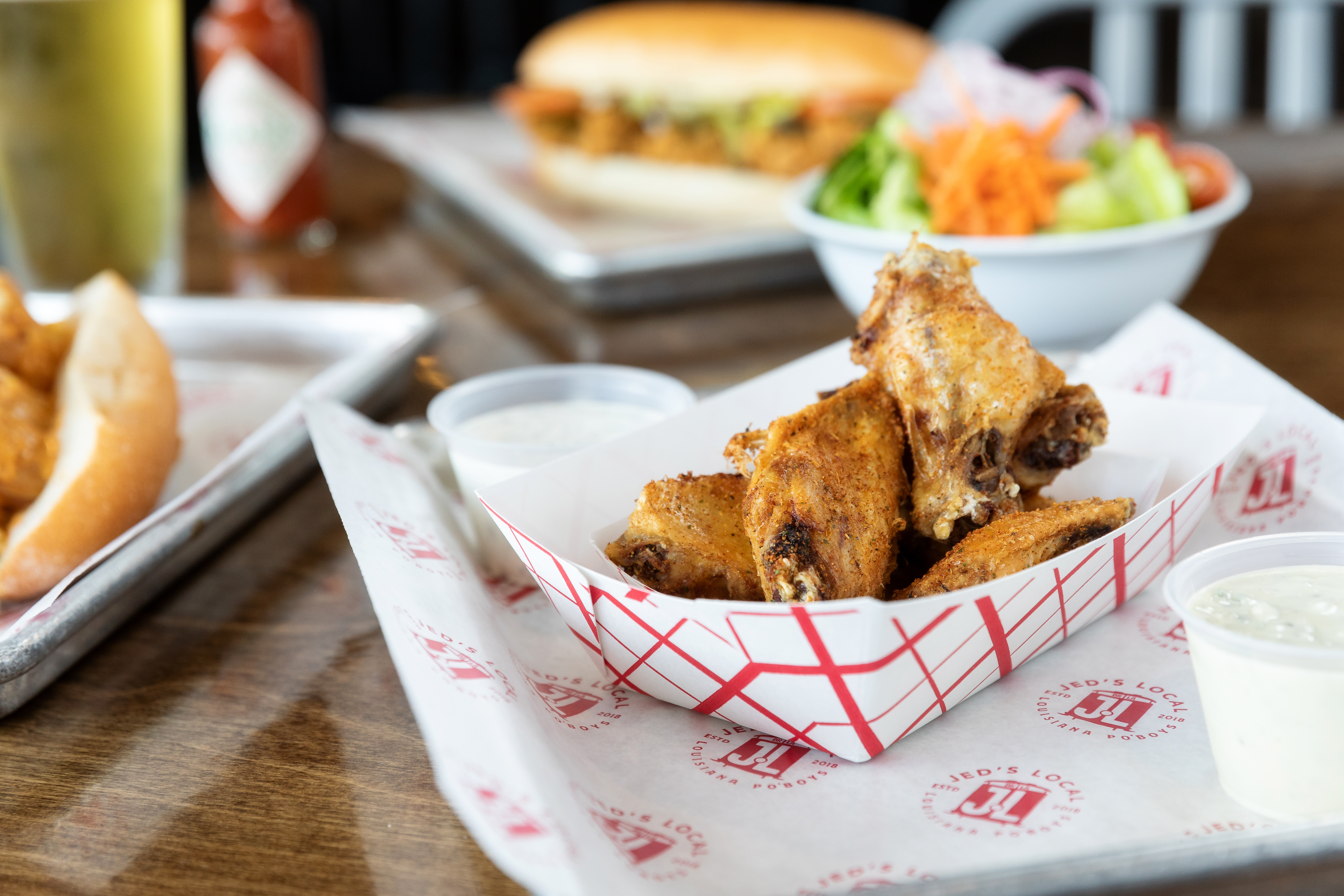 One friend zeroed in on Cochon Fries with roasted pork, cheddar cheese, Creole mustard spread and red onions. The mild shredded pork was moist and scattered across amply seasoned fries. The melted cheddar and mustard spread added sharp and piquant notes with the spread perfectly tying it all together.

Po-boys are offered in half and whole sizes, but know this: The whole is colossal. My friend ordered a whole Fried Gulf Oyster Po-boy, but before the first bite he declared he would be packing up half to take home. The oysters were briny and perfectly cooked, though they were a bit bready and under seasoned.

A promising and interesting option was the Shrimp and Fried Green Tomato Po-boy. It included shrimp and crisp green tomatoes all dressed with a remoulade that was vinegary but paired well with the tart tomatoes. The plump shrimp were plentiful, but we suspected they were boiled—not “grilled,” which was indicated on the menu—as they had no discernible grilled texture or flavor.

My table’s take was that po-boy bread should be billowy in the center yet crisp on the outside. Jed’s Local’s buns—which come from Leidenheimer Baking Co. in New Orleans—were definitely soft in the middle, but lacked that expected crunchy exterior.

Mixed Greens Salad was a wonderful respite from the heavier options. A substantial serving of fresh greens was topped with blue cheese, pecans and dried cranberries that added balanced sweetness to the salty cheese. A topping of shrimp were fresh and well cooked. But similar to the shrimp po-boy, they didn’t appear to be grilled as was promised.

One of my friends insisted on trying the Confit Chicken Wings. Offered plain or buffalo-style, we couldn’t decide which so we requested both. Since they are purportedly confited, the meat should have fallen off the bone but didn’t. Still, my friend declared them delicious, with the sauced version having ample spice and seasoning.

We were stuffed once leaving, and it wasn’t until down the road that we realized no one had thought about dessert. But should you need to satisfy your sweet tooth, Jed’s menu offers simple versions of Banana Pudding and Bread Pudding.

Overall, Jed’s is a welcoming, cozy space that already seems to have become a local hangout. Food was delivered quickly, making this an excellent option for an expedient lunch break or a leisurely noontime meal with friends. But with a bar menu available, lingering is welcomed—and likely encouraged.

THE BASICS: Russell and Sally Davis, owners of the classy Jefferson Highway restaurant Eliza, opened Jed’s Local in late 2018 on the Mid City side of Jefferson. Its vibe is more casual, with po-boys as the focus, though the menu is brimming with platters, specials and a full bar’s worth of libations.

WHAT’S A MUST: Po-boys, obviously. Some favorites include the Fried Gulf Oyster Po-boy and the Grilled Shrimp Banh Mi Po-boy. If you’re not in the mood, the Cochon Fries plate offers a filling and shareable spread, while the Mixed Greens Salad offers a healthier alternative.

Predictions for the 2021 crawfish season in Louisiana