The beauty of poke, if you ask Southfin Southern Poké co-owner Eusebio Gongora II, is that it has no limits. With infinite combos of bases, proteins, mix-ins and garnishes, there’s no reason to eat the same bowl twice.

But lately, poke appears limitless in another regard—there seems to be no end in sight to new and old restaurants alike getting in on the trend.

Since 2017, Baton Rouge has seen brand-new poke restaurants open all over town, although some of them have shuttered mere months later. Meanwhile, diners can find poke dishes scattered on the menus at restaurants ranging from Creole Cabana to BJ’s Restaurant.

“Nah,” says Yuzu co-owner Vu “Phat” Le. “Poke is here to stay. Just as long as restaurants do it justice—make sure the proteins are fresh and all the ingredients are cut the same way. People in Baton Rouge love sushi, and poke is basically deconstructed sushi.”

“People come to Southfin to eat something that won’t make you want to take a nap afterward,” he says.

And with restaurants like Southfin and Yuzu constantly reinventing their menus, don’t sleep on this trend just yet. 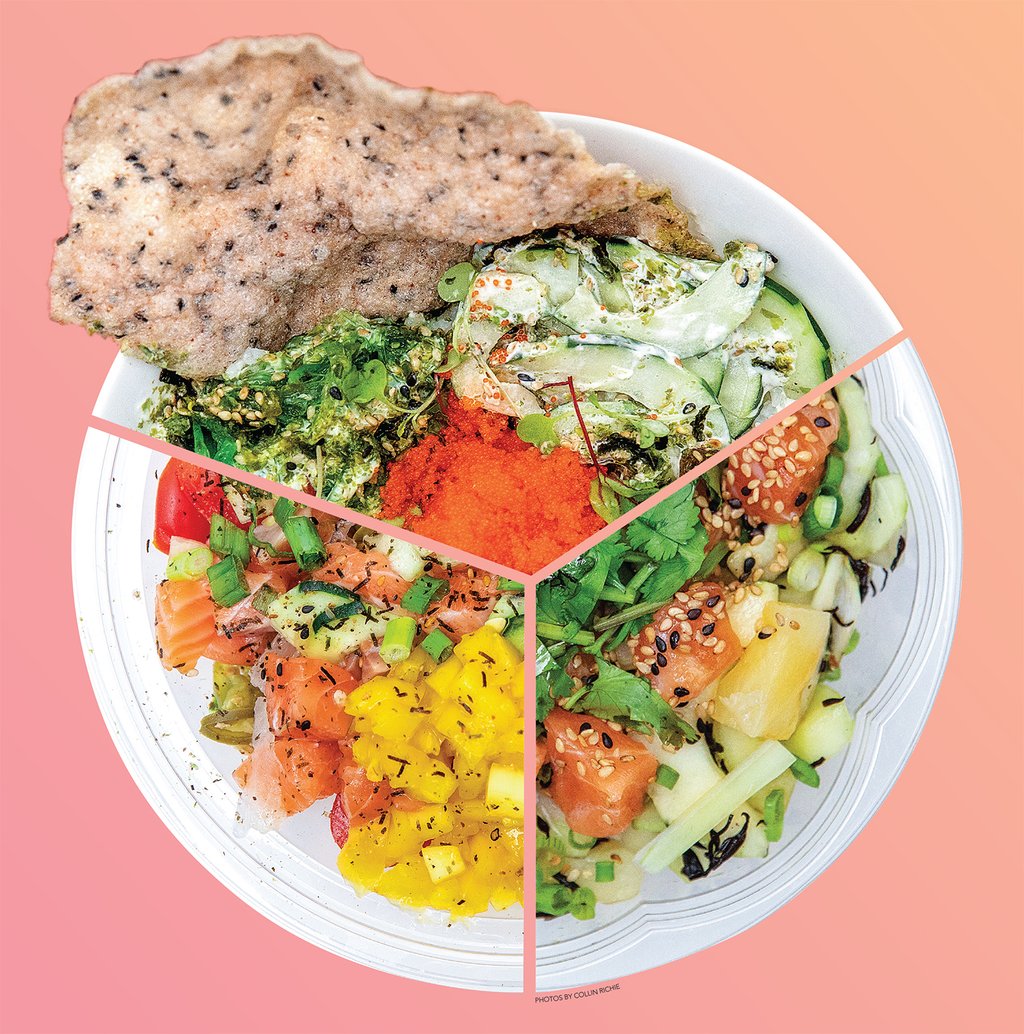 1. Yuzu: Phresh at the Market

This relatively new addition to White Star Market is the brainchild of the team behind the food hall’s popular Asian street-food stand, Chow Yum Phat. So it’s no surprise that Yuzu brings a similar experimental, innovative attitude. Sauce and vinaigrette flavors range from green curry to Thai mango to a house aioli. Toppings like crack crunch and fried garlic add texture to each bite. The restaurant’s jumbo puffed rice crackers provide a chance for diners to play with their food—crumble the cracker on top of the bowl, or use it to scoop up the ingredients as if you were eating a nacho.

The OG of Baton Rouge poke shops, Southfin served as most residents’ official introduction to the dish when the restaurant opened in 2017. Its take on poke leans heavily Southern—the eatery uses Louisiana rice and Gulf seafood, and it makes all of its seasonings and sauces in house. Watch for its rotating bowl of the month and for proteins like eel and octopus to make appearances on the menu.

With 10 signature bowls on the menu, this fast-casual spot offers plenty of options for beginners looking to dip their toes in poke territory. In addition to traditional proteins such as ahi tuna, salmon and shrimp, Poké City mixes it up with options like shrimp tempura, tofu, eel and chicken. The toppings are just as interesting—try the snow crab or squid salads, tamago egg or cream cheese.

A few other places to try poke

Where do you like to order poke? Tell us in the comments below.