The thought of Pinetta’s conjures sweet memories. Dim lighting, soft music, straw-wrapped wine bottles adorning the walls—this place is like a time machine to romantic dinners of my past. The small restaurant is one that refreshingly and unapologetically never seems to change.

Opened in 1962 by an immigrant family, this old-school stalwart quietly held court on Perkins Road near the overpass until the late ’90s, when the owners announced its closing. Shock reverberated among its many devotees. Luckily, not long after, new owners stepped forward to take the reigns and continue the tradition just as it had been.

There is no hostess at the door, leaving the busy waitstaff to operate as both server and host. This setup left us waiting to be noticed while empty tables were just beyond our reach. Luckily, we knew the score, but this arrangement could find new patrons confused upon entering.

Once seated, we discussed appetizers. Three mini calzones comprise the Panzerotti appetizer, which is stuffed with ham and cheese and covered with Pinetta’s hallmark rich red gravy. The tiny cubed ham tasted similar to pepperoni, and the cheese portion was refreshingly scant. After several bites, I noticed a peppery kick in the sauce. This was all the more reason to sop it up with the crunchy dough edges of each calzone.

We waited a bit between the Panzerotti and our next appetizer, but an ample basket of warm, crisp rolls kept us happy.

We were warned the Stuffed Vegetables starter was small, but we found the serving substantial given our full order. Rich seafood and bits of ham were stuffed inside slices of zucchini, squash, tomato and eggplant, then baked and topped with mild cheese. The mix of flavors made for a superb dish.

The highly recommended Lentil Soup was thick, piping hot and huge. Expertly cooked earthy brown lentils mingled in a brothy soup with black pepper accents. Broken noodles were a textural surprise that added heft to an already hearty soup. Knowing I had a full entree ahead, I could barely put a dent in this bowl. Later, I was surprised to learn it is a vegan dish.

My partner’s Italian Salad had a complex but airy cheese, oil and balsamic dressing on romaine. It was a fresh intermezzo. Pinetta’s version of the Sensation Salad was loaded with plenty of Parmesan and garlic. I thought it could have used a squeeze more of lemon, but my friend declared it on point.

I’ve had a love affair with the Involtini entree for years. Luscious dark red sauce with just a hint of sweetness coats a tender veal roll stuffed with cheese, mushrooms, potatoes and peas. Adding bulk to the sauce are more peas and diced potatoes. If you only order one dish here, make it this one.

Despite my devotion to the Involtini, I’ve always been curious about the other European menu items hailing from Turkey, Armenia and Germany. I inquired about the Musaca Potatoes, and the server was very enthusiastic until I asked how it fared against the Shish-Ka-Bob. She quickly pivoted, saying that was the dish to get. She described it as marinated beef, onions and green bell pepper skewers accompanied by rosemary potatoes that almost caused her to swoon as she talked about them. Upon first bite, I saw why she loved the potatoes: They were inundated with enough chopped garlic to stop a vampire, yet the flavor was mellow, nutty and spectacular. Medium cooked chunks of beef were skewered and interspersed with al dente, slightly smoky vegetables. While the kabob was enticing, the potatoes were the stars of the plate. 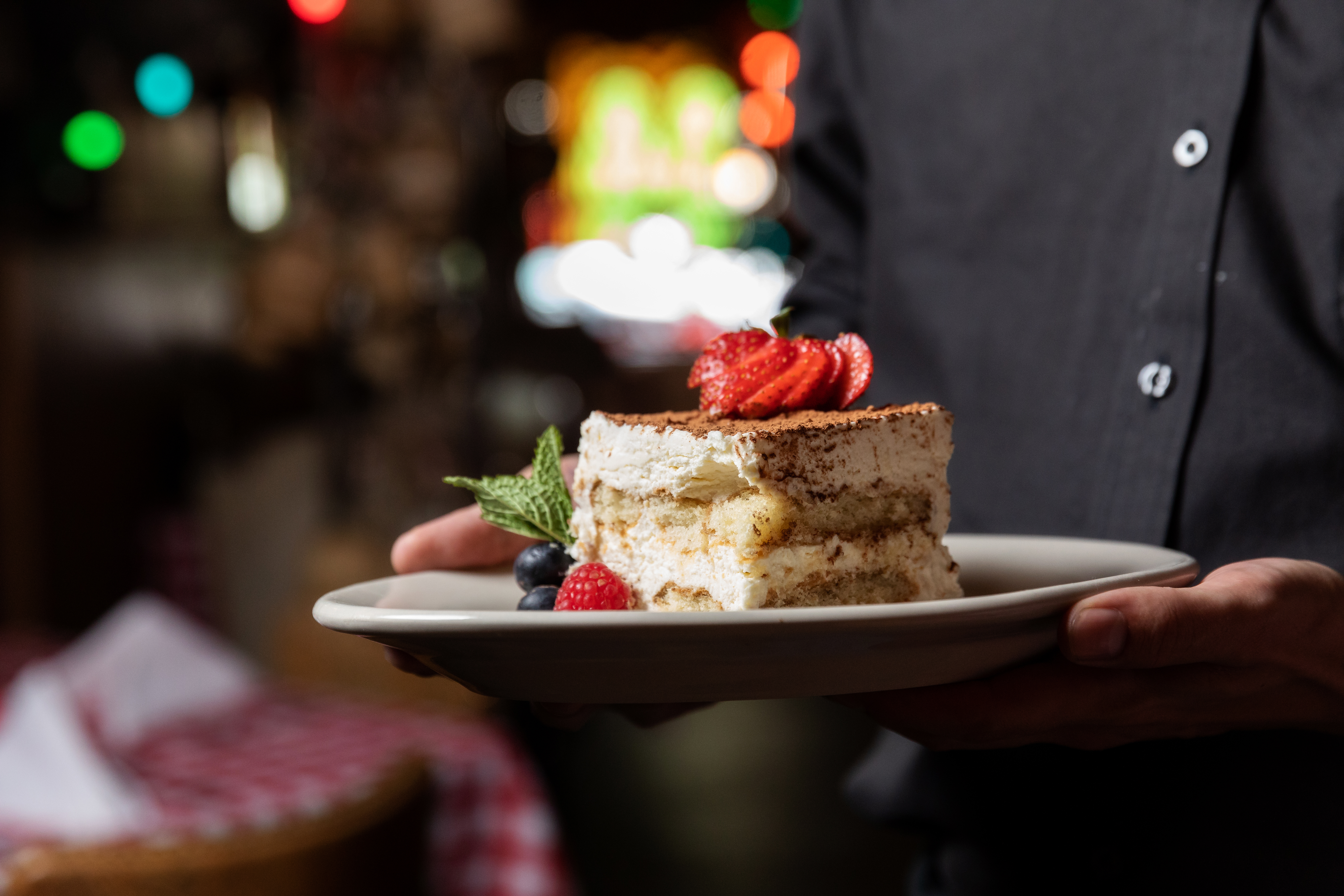 There were two lasagnas listed, and my friend ordered the meat version, though we were intrigued by the gluten-free vegetarian version. The lasagna was served in a miniature cast-iron skillet we were warned not to touch as the server transferred the piping-hot contents onto a plate tableside. Layer upon layer of herby ricotta, ground beef and soft noodles were drowned in a slightly sweet red gravy that was to die for. When my friend would look away, I couldn’t stop myself from sneaking in for a few bites.

When the Chicken alla Cacciatora was set in front of my partner, the aroma wafting across the table caused my mouth to water. Like the lasagna, this was brought in a cast-iron skillet and plated at the table. A tender chicken leg quarter was swimming in tomato gravy that was a perfect match for the included spaghetti. The chicken had obviously been left to stew in the luscious sauce and was falling off the bone.

Dessert offerings of housemade Tiramisu, Chocolate Tiramisu and Panna Cotta had us tempted to order all three, though restraint led us to try just two. The Tiramisu had thick, billowy layers of mascarpone with soft espresso-soaked lady fingers. Since no one flavor dominated, there was a perfect balance of sweet and bitter coffee with a supremely creamy texture. Simple and scrumptious.

As fantastic as the Tiramisu was, it was nice to follow its richness with Panna Cotta. A firm top and lusciously creamy interior had me at first confused then delighted by the delicate flavor and its bare hint of spicy cinnamon. Truly luxurious.

Time stands still at Pinetta’s, and that suits me just fine. It’s refreshing to return years later and find my former love unchanged, waiting for my return. Well, except for the singing waiter who sadly disappeared decades ago. I guess the more things change, the more they remain the same. Thankfully.

The basics: This Perkins Road stalwart for romantic dinners has a long history among Baton Rouge families. When the original owners, the Bubolas, closed Pinetta’s in 1998, a regular stepped in. Diane Baringer and her husband Dale reopened the restaurant in 2001 with the Bubolas’ blessing—keeping the decor, much of the menu and the beloved red sauce.

What’s a must: Lentil Soup and Stuffed Vegetables to start; the Involtini entree for its tender veal roll stuffed with cheese, mushrooms, potatoes and peas; the traditional Lasagna served in a cast-iron skillet; and a housemade Tiramisu for dessert.

Predictions for the 2021 crawfish season in Louisiana