John Makeri and Menam Abdalla started their Mediterranean restaurant business in Zachary, serving up Greek and Lebanese classics, and immediately developed a following that now includes locations in Central and Denham Springs.

Start with some hearty appetizers like Falafel or the Fried Halloum Cheese. If you’re in need of a warming starter, the Lentil Soup hits the spot. For entrees, aim for the Veggie Phoenicia platter if you want to get a sample of popular items like Mujadara and Moussaka, and finish the meal off with a sweet dessert of Ashta and its layers of custard and phyllo dough.

Café Phoenicia can be found in two parishes and three cities in our area: the original in Zachary, plus locations in Central and Denham Springs. Given its close proximity to our house and traffic being, well, terrible, we decided to visit the Livingston Parish outpost.

Located just off I-12 in a strip of businesses next to the Bass Pro Shop, this Mediterranean restaurant serves up familiar Greek and Lebanese cuisine in a dining room painted with murals of the coastal European region.

It was a good call to start with Falafel from the appetizer section and a cup of Lentil Soup. Flavorful falafel balls had copious garlic and parsley throughout with a crisp exterior. A snappy tahini sauce for dipping boosted the chickpea and fava bean filling. The real jewel of our starters was the yellow lentil soup. It had a lightly puréed texture and was peppery without overpowering my palate. It was a phenomenally flavored, hearty and comforting cup. 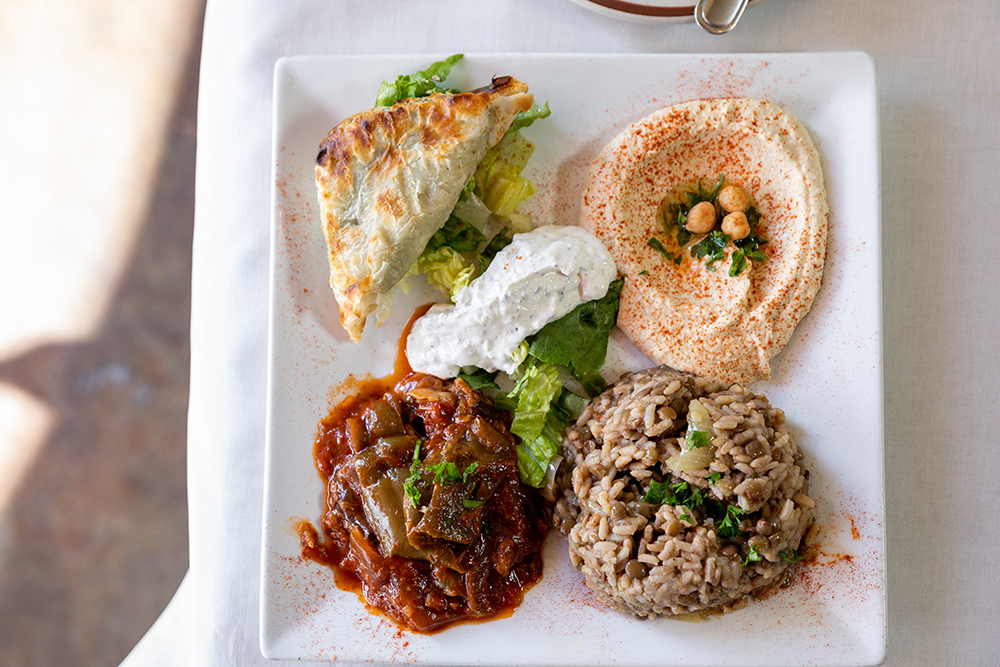 A sampler platter entree gives diners a wide swath of tastes and a morsel of several menu items. To allow for the biggest options of both appetizer and entree items, the Phoenicia Sampler seemed a no brainer. With chicken shawarma, gyros, kabobs, kibbi, hummus, grape leaves and cabbage rolls, this plate literally had it all.

Its chicken was rather dry with crisp edges and a soft lemony piquancy. Gyros was tender with an easy tang, though it was not particularly unique from others I’ve tried. The kibbi had a crisp cracked wheat exterior, but it was rather greasy, and the ground meat inside could have used a touch more seasoning. The true standout, though, was the tender, juicy, perfectly cooked marinated beef kabob, which had us wishing it was the singular meat on the plate.

Both the hummus and rice pilaf were classic versions, but when mixed together, each elevated the other. Cabbage rolls were incredibly juicy with a perfect slow-cooked cabbage flavor that enhanced the filling of mild, tasty meat and rice. The brininess of the grape leaves had the same engaging effect on the filling.

A rarity on any cuisine’s menu is Lamb Shank, likely due to its long cooking time. On our visit, the restaurant had unfortunately just run out, so we chose the Veggie Phoenicia platter instead. 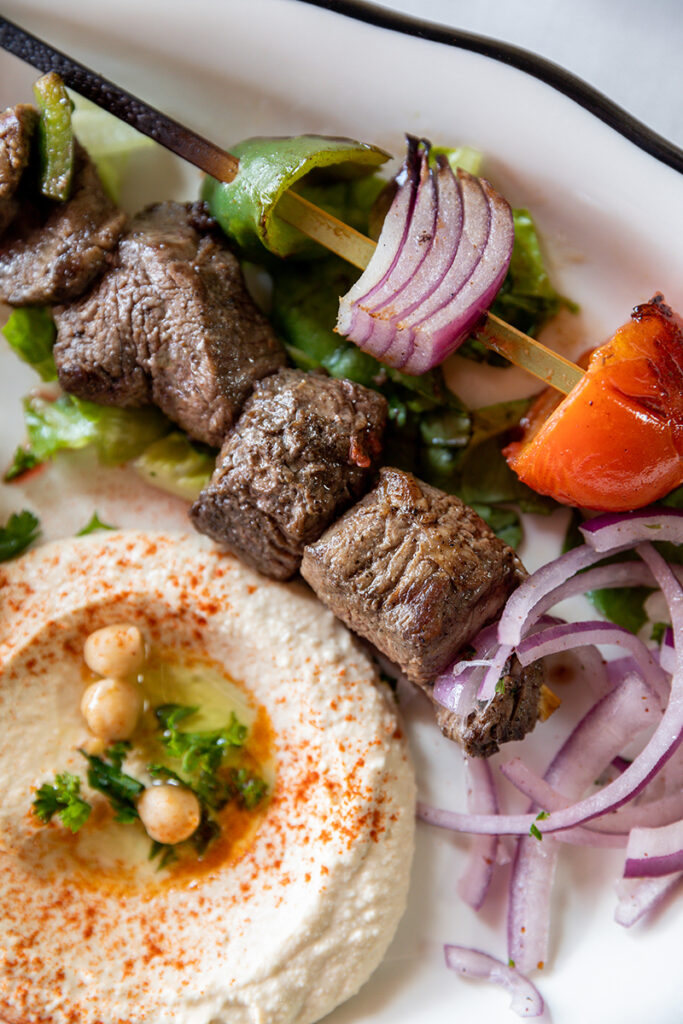 With mujadara, moussaka, spinach pie and hummus—which they happily swapped for baba ghannouj—we were able to try just about every traditional vegetarian dish offered on the menu. Mujadara includes two of my favorite comfort foods: lentils and rice. A beautifully seasoned dish, this classic combo of beans and rice was quite pleasing with its earthy flavors and zing of heat. I could have eaten a bowl full. With the spinach pie, flakey phyllo encapsulated a robust spinach and onion center that caused both my partner and I to greedily gobble it up. Moussaka had a wonderful richness with succulent eggplant and tangy tomato sauce. The smokey baba ghannouj had a lingering garlic flavor that made us grateful we had substituted this option over the hummus we’d already sampled. 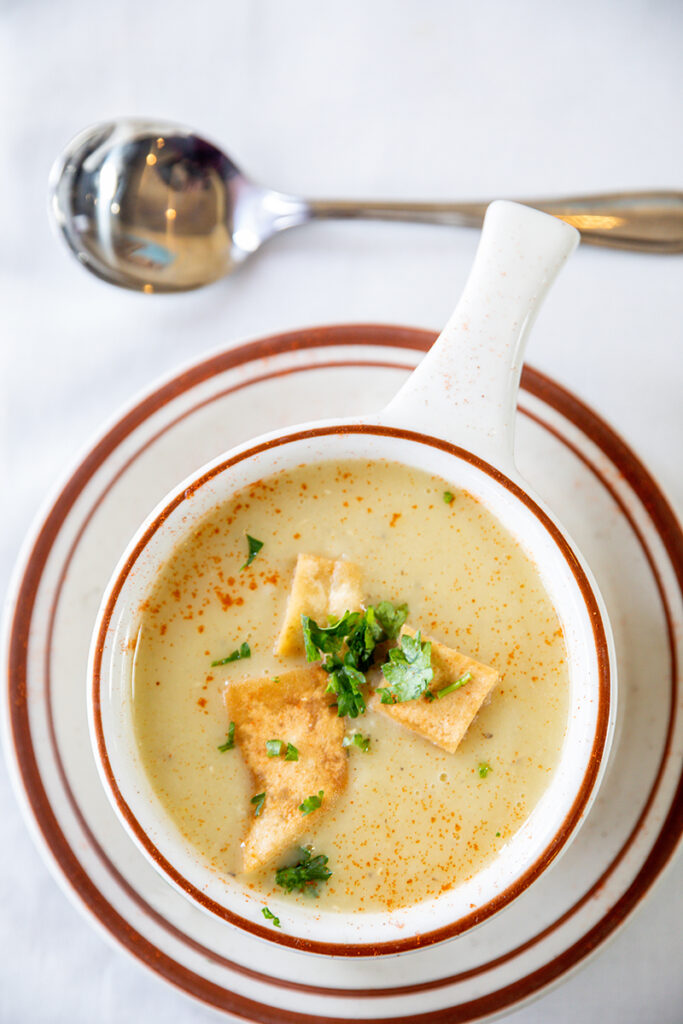 Next was the dessert course. Though Café Phoenicia does offer baklava and tiramisu, we stuck with ashta, a more traditional Mediterranean dessert but perhaps less familiar to American tastes. Served hot, this flakey pastry’s exterior was painted with a light honey rose syrup and sprinkled with chopped pistachios. Inside, a lightly sweetened custard oozed out of the layers of phyllo. Airy and lithe, this dessert is thankfully far less sugary and rich than the ubiquitous baklava. It provided a perfect ending to a heavy meal.

For us, the vegetable options far outpaced the meat options at this restaurant in both zest and zing. These ample servings of highly seasoned options would  satisfy even the most ardent meat and potatoes eater. My advice: Go vegetarian at Café Phoenicia. After this, the hardest decision will be which of the tasty locations to visit first.