My in-laws and their friends adore Portobello’s Grill and have been raving about it for many years. Given the Jones Creek location’s close proximity to my ’hood, I thought it high time I give it a shot.

While this location, at the corner of Jones Creek and George O’Neal roads, is a little more rustic-chic than its Bocage Village sister restaurant, much of the menu features the same elevated-yet-casual Louisiana-Italian fare.

We started with a cheesecake. Not dessert, but crawfish. I’m a big fan of a savory interpretation, and this appetizer was gorgeous in presentation. Resting in a pool of a light reddish Creole tomato dressing, the cheesecake slice was topped with artful drizzles of aioli. We found it overly salty and rich, though the tartness of the tomato sauce helped slightly quell the intensity. I hoped for more lemon in the aioli, which was needed to tie the whole dish together. We all agreed that it was extra salty and too fatty.

I wrongly expected the entrees to be straight-up red sauce Italian fare, but was pleasantly surprised to see an abundance of seafood options. Calling my name was Fish Katherine, consisting of sautéed redfish topped with jumbo lump crab meat, Creole meunière, hollandaise and a side of asparagus. The meunière had a delightful tanginess that complemented the pan-crisped fish and luxurious crab. Caramelized roasted asparagus presented a beautiful version to contrast the usual restaurant offerings of steamed asparagus spears. A smear of mild hollandaise added to rather than detracted from the crisp vegetable. 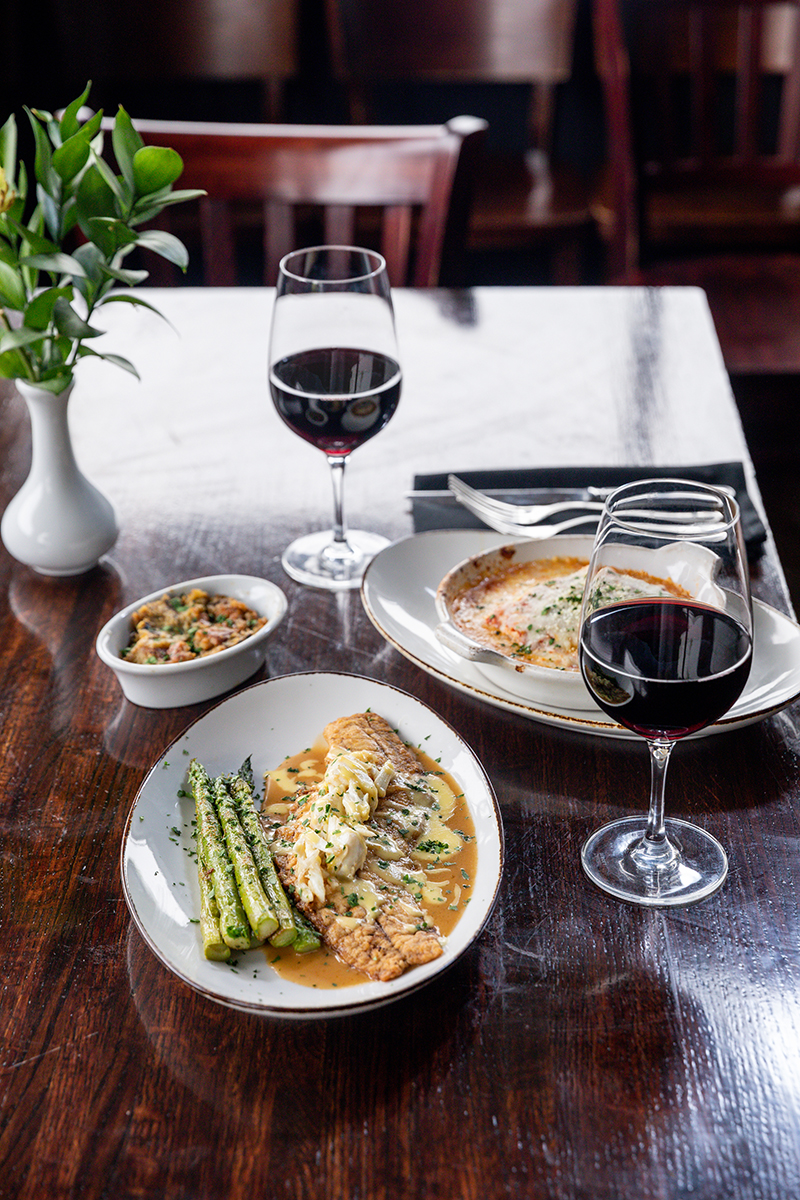 Another surprise was the plate of Half Roasted Duck. The golden-skinned roasted duck leg was topped with a sweet-sour sauce that enhanced the flavor of the tender and earthy fowl. It was an exciting alternative to beef or chicken, and one I enthusiastically recommend.

I couldn’t resist trying Wild Mushroom Bread Pudding from the menu of side items, so I substituted that for the polenta included with the duck. Our server had described this side dish as “dangerous.” Soft and luscious with a caramelized cheesy topping, the pudding was indeed dangerously sinful.

Not wanting to miss an Italian staple, we tried Miss Grace’s Five Cheese Lasagna, which is featured only at the Jones Creek location. Beef, red sauce and, of course, five Italian cheeses—including ricotta—were layered between pasta sheets. It was a pretty classic representation, especially when what you crave is old-school lasagna. And this version fulfilled that yearning.

For dessert, we went with the most interesting of the bunch: Ricotta Cheesecake, though all choices were house-made and sounded drool-worthy. It was ultra creamy and smooth as silk, with a delightful tang not often found in restaurant cheesecakes. It made me wish more restaurant cheesecakes were like this.

With two locations, most residents can easily get their Louisiana-Italian fill seven days a week, plus a brunch offered Saturdays and Sundays. For me, I’ll stick conveniently close to home with the southeast spot. But if you’re near Bocage, this stalwart location will definitely feed your needs.

Kiva Guidroz founded the original Portobello’s in 1996. It celebrated its 25th anniversary in October, now with a location at the Bocage Village Shopping Center and another near Jones Creek Road. Chef Peter Sclafani became co-owner in 2020, helping update the restaurants’ menus and overall look—aiming at what they say is a “modern neighborhood steakhouse” vibe.

Start the meal with a slice of savory Crawfish Cheesecake before going in on entrees that marry southern Louisiana classics with Italian cuisine, such as the Creole Shrimp & Crab Alfredo. The Fish Katherine tops Gulf redfish with lump crabmeat and a Creole meunière. At the Jones Creek location, Miss Grace’s Five Cheese Lasagna offers classic Italian comfort food.