Terica Toliver wants you to know that tea not only has health benefits, but it’s fun to make, too.

Working out of her home in Prairieville, Toliver runs Chicly Brewed Tea, an online shop selling a collection of loose-leaf teas, tea blends, teawares and more.

Toliver has always liked to drink tea, and she started making her own during the pandemic. She realized that many people were only familiar with pre-bagged varieties, so last April she came up with the idea to start a business to change that. Chicly Brewed Tea opened in August 2020.

“I’ve always been an avid tea drinker for as long as I can remember,” Toliver says, “and then I learned about tea blending a few years back.”

Toliver is a psychotherapist and sometimes recommends her clients try herbs and spices that are found in loose-leaf tea blends. More and more of her family and friends were also starting to ask about the benefits, she says.

“I make loose-leaf tea,” Toliver says. “You can very visibly see the difference between that and bagged tea.”

Bagged tea, she says, can be full of dust and particles from processing facilities, while loose-leaf tea and loose tea blends contain whole tea leaves, herbs and spices.

One of Toliver’s most popular blends, the Citrus Mint, is a dupe for a popular Starbucks drink, the Medicine Ball. It’s an herbal tea with flavors like peach and mint. 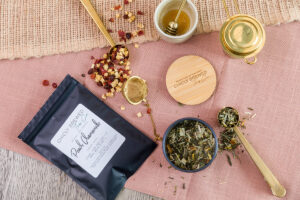 Other blends include refreshing flavors like Lavender Lemon, Peach Chamomile and Chocolate Chai.

Toliver mostly sources her ingredients domestically, she says, and tries to source out of ethical and sustainable tea farms.

“I like using farms that are taking into consideration the environment and making sure their carbon footprint isn’t so large,” she says. “That’s very important to me.”

Toliver hopes to help people feel more comfortable brewing at home. Her teas include instructions with recommended steeping temperatures and times. She sells teaware like gold spoons, infusers and strainers, as well as tea glasses and tea tumblers, which can be used to take your tea on the go or make drinks like iced tea overnight.

Caffeinated drinks like coffee give you an immediate punch of energy and wear off around mid-day, but tea gives you spurts of energy throughout the day. It is also more hydrating than other popular caffeinated drinks. Drinking tea should feel like a luxury, Toliver says, like the users are taking time for themselves.

“I really wanted to incorporate more self care into people’s routines,” Toliver says. “Loose-leaf tea kind of makes you enjoy the time making it.” chiclybrewed.com

These local partnerships could save your life [Sponsored]