The turning point of modern attempts to revitalize downtown can be traced to the opening of the Shaw Center for the Arts in 2005. The shimmering futuristic facility seemed to usher in a new identity for Baton Rouge that was hip, cool and brimming with activity. Housing the Manship Theatre, Glassell Gallery and the new home of the LSU Museum of Art, nearly every weekend saw a new cultural event in its performance spaces and on its rooftop terrace. Another boon: much-needed office space for small arts groups and nonprofits.

Forum 35’s Art Melt began as a small juried art competition in 2003 and soon turned into the biggest summer event in Baton Rouge and the largest juried show in the state. As it grew, it also faced some controversy, including a 2009 show where organizers pulled down a black-and-white photograph of a nude woman at the request of some attendees and to the outrage of others. The incident brought up important questions of whether the conservative Capital City was ready to support serious art. Still, Art Melt continued its run until 2019, when a partnership with the Arts Council morphed the event into Art Flow as part of the Ebb & Flow Festival weekend held annually in April.

An indication of a healthy arts scene is all the smaller groups—even the short-lived ones—that pop up and add their flavor to the gumbo.

The last 15 years have seen plenty of that, with the likes of the collectives 4484, Elevator Projects and others. Culture Candy’s online arts calendar helped under-the-radar art shows get their due. And its Uncommon Thread wearable art show was always a hit. The Stabbed in the Art pop-ups and Ephemeral Gallery provided outlets for artists who might not get into major galleries.

Meanwhile, we started to see underground art garner more legitimate support around the city. Elevator Projects took over an entire floor of the Chase Tower South in 2014 for an exhibit of more than 80 artists.

And since 2008, Baton Rouge Gallery has hosted the city’s weirdest and funkiest art exhibit and costume party with Surreal Salon.

At Baton Rouge’s heart, it’s still a small city with a small music scene, and that means music venues come and go. Some went away tragically, like The Caterie, the Acadian-Perkins Plaza hub for college-crowd shows that burned down in a New Year’s Day fire in 2010. In contrast, Chelsea’s used a New Year’s Eve 2015 party with Michael Foster Project to bid farewell to its patrons. Others promised to come back but have yet to return, like the Spanish Moon, which closed indefinitely for renovations in 2017. Mid City Ballroom has since taken up the banner for indie shows. Others have morphed into something new, like Dyson House Listening Room, which shuttered its Jefferson Highway location in 2018 but was reincarnated as an intimate regular series at Zeeland Street in 2019. Downtown has been a revolving door of venues over the years, too, like SoGo Live, Red Star and Roux House. And now we’re hoping places like The Basin Music Hall and Squeaky Pete’s can survive state regulations that came during the pandemic.

We admit it, 225 poked fun at the prospect of a major country music festival in Baton Rouge when it was first announced. Why here and not Nashville or Texas? But the inaugural Bayou Country Superfest in 2010 showed the city and event organizers were onto something. Crowds of cowboy boot-wearing music lovers poured into Tiger Stadium to see Keith Urban, Taylor Swift, Kenny Chesney and Brooks & Dunn perform. The caliber of country music stars only continued after that, with a peak attendance of 135,000 in 2014. That was until the festival moved to the Superdome in 2017 for two years while Tiger Stadium underwent updates. A return in 2019 never matched the original appeal, with only about 50,000 attendees, and organizers announced in January 2020 that it would go on hiatus.

Where were you when The Twilight Saga: Breaking Dawn filmed in Baton Rouge? Parts one and two of the insanely popular series’ final installment filmed around the city in 2010-2011. It was a big win for us, and the state saw more than 75 applications for film projects in the first half of 2010 alone. Sightings of Patrick Dempsey, Liv Tyler, Ashley Judd, Tom Cruise and others became a regular activity. And with Celtic Media Centre launching in 2008, Baton Rouge was primed to be the true Hollywood South until uncertainty about the state’s tax incentives sparked a downturn in 2015. Those tax incentives have since returned in a modified form. And the positives can still be seen in businesses like the local Crafty Apes visual effects company, which has worked recently with Steven Spielberg, and the big-budget Tom Hanks war drama Greyhound, which filmed here in 2018.

Back in 2008, 225’s “Ugly Award” feature called out graffiti and street art as a nuisance more associated with gang activity than legitimate art. Then something changed. The Walls Project launched in 2012 with Saliha Staib and Clark Derbes’ geometric design on the side of a law firm off Third Street. Soon, every property owner downtown with a blank wall wanted in on the action. Meanwhile that same year in Old South Baton Rouge, art aficionado Kevin Harris was quietly orchestrating a beautification project of his own. Through his Museum of Public Art, he funded some of the biggest street artists in the world to leave their marks on dilapidated buildings along Myrtle Walk and nearby blocks. While Harris’ endeavors have since slowed down, the Walls Project has blossomed into a community nonprofit with programs for young people, an urban farming arm and the MLK Fest, which keeps its street art origins alive.

There’s nothing like a neighborhood party, and the Ogden Park neighborhood in Mid City proved that in 2013. Homeowners opened their yards to artists to set up booths and sell their wares, or let local musicians stage concerts on their front porches. That fall weekend has become a must-do event for not just the neighborhood, but people across the city who stroll down Bedford and Beverly drives all afternoon and afterparty it up at Radio Bar later.

Locals can be forgiven for still referring to it as Baton Rouge Little Theater—it had that name since 1951. But the local theater company proved it wasn’t so little anymore with a name change in 2013 that reflected its prominence and popularity in the community. It’s now one of the oldest community theaters in the country, and consistently brings crowd-pleasing big-stage musicals, such as Newsies and Cabaret, along with more intimate plays to eager audiences every season.

Though the Baton Rouge Blues Festival began in the 1980s, it really came into its own in the 2010s with the likes of Buddy Guy and Mavis Staples headlining jam-packed weekends of blues music across multiple stages downtown. When the Crest stage at Galvez Plaza was completed in 2013, downtown festivals became a force to be reckoned with underneath the canopy of the stage’s futuristic sculpture. With the addition of the Third Street Songwriters Fest in 2014 and the Arts Council’s FestforAll becoming Ebb & Flow Festival in 2017, April became a month of nonstop music in Baton Rouge.

We like to say 225 sort of provided the origins of Mid City Makers Market. Our November 2016 cover story on Baton Rouge’s creative makers scene led several of them—including de facto leader Madeline Ellis of Mimosa Handcrafted—to join forces that same month for a small pop-up on Eugene Street. A year later, and the Makers Market had become a monthly event with dozens of vendors, food booths and live music. It’s now the main spot to see what the Capital City’s young and hip creative class is up to, and the results are beautiful.

There’s nothing more synonymous with the holidays in the Capital City than Baton Rouge Ballet’s Louisiana take on The Nutcracker. Setting the classic tale on the bayous might have seemed like an obvious choice, but the results are still stunning today with elaborate sets, world-class dancers, the Baton Rouge Symphony Orchestra and plenty of young local talent. While it’s been a jumping-off-point for talented area dancers who have gone on to Broadway and national dance companies, it’s also a showcase of generations of dancers who now watch their own children perform in the production.

Remember the Inferno’s comedy nights downtown? While the Third Street spot later became a Raising Cane’s, that doesn’t mean the laughs have stopped. Family Dinner Comedy Troupe is still as fresh as ever, and new groups have sprouted around the city, too. NO Show Comedy began hosting its improv nights in 2016 in front of packed houses at the former Guru space behind The Market at Circa 1857. Around the same time, LATCo. Comedy formed and brought its popular improv shows to Driftwood Cask & Barrel and Phil Brady’s. LATCo. found a permanent home earlier this year in Ogden Park where it was hosting improv classes and shows pre-COVID. Both LATCo. and NO Show have kept the laughs going with virtual events since then. 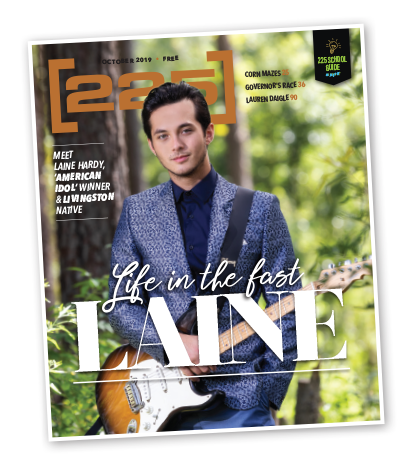 There comes a point in every American Idol season when the final contestants visit their hometowns with a full camera crew in tow. For Livingston native Laine Hardy—who at that point in season 17 was already a favorite to win—the hometown celebration was one for the books. In May 2019, the rural community was overrun with Hardy fans for a parade and outdoor concert that showcased his south Louisiana roots to millions of viewers. That made Hardy’s win just as sweet, and he returned in September 2019 for a true homecoming concert and festival at the Livingston Parish Fairgrounds—this time as a bonafide superstar.

A year that tried the arts scene the hardest (2020)

Much has already been said about COVID-19’s impacts on Baton Rouge, as well as the racial tensions that occurred this summer. But it’s hard to overlook how 2020 dealt a heavy blow to the arts community. Without physical audiences, local theater and dance companies, art galleries and musicians all had to jump on the virtual bandwagon as quickly as possible. Some sought to give families something to do during the shutdown, like Baton Rouge Gallery’s online Flat Curve Gallery or Playmakers of Baton Rouge’s virtual variety show. Others, like Theatre Baton Rouge and New Venture Theatre, hosted Zoom discussions on diversity and inclusion in theater. Our favorite local bands still found ways to share music with livestreams from their homes on social media. It all provided a reminder of the important role the arts play in our lives, why it’s so important now to keep supporting them, and how eager we all are to get out and celebrate our local talents and creatives again.